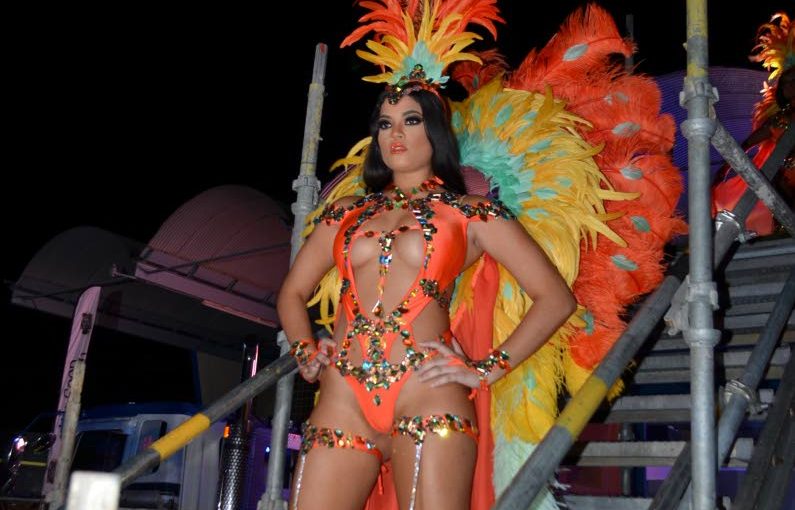 A trailer truck picked up costumed models from the college, drove a few yards in a westerly direction, then turned into the grounds, after which it lined up alongside a temporary staircase which was used for each model to descend into the crowd.

As each section’s models made their way through the crowd they then proceeded to atop mini stages that lined the circumference of the party area for patrons to get a good, close-up look at the costumes.

The presentation is based on a period in the early 1900s. In the climate of the period, especially in Paris, the arts flourished and many masterpieces of literature, music, theatre, and visual art gained recognition. It was considered a golden age of opulence, innovation and optimism as represented by anchor sections – Lustre, Forged and Ballet Russe.

Bandleader Tracey Andre said, “This year’s launch was a reflection of the theme. We wanted to be innovative so we decided to move away from the traditional stage format to one where we allowed people to feel part of the presentation and to have an up-close and personal view of the costumes while maintaining the overall experience of an art gallery.”

Other sections that depicted the theme were Absinthe, Amore, Bourgeois, and Victoire all designed by Alejandro Gomez; Cabaret and Couture by Jenerlee Ramnarine; Karlene Ballah’s Ballet Russe; Champagne from Anya Ali and Farida Ali-Mootiram; Joie de Vivre by Lizz Dahlin, Poiret from Christine Sadler and Royals by Deborah Lherison and Brandon Phillip.

Tue Jul 10 , 2018
CARIBBEAN writers at home and in the UK will meet in an evening of celebration at the UK launch of Thicker Than Water being hosted by Arvon on July 19 at the Free Word Centre, London. The stories, poems and memoirs in this anthology tackle everything that’s most complicated and […]