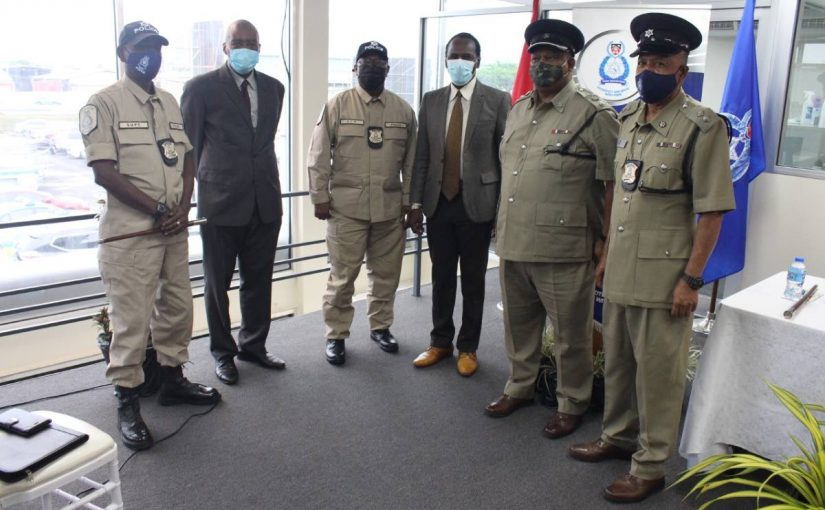 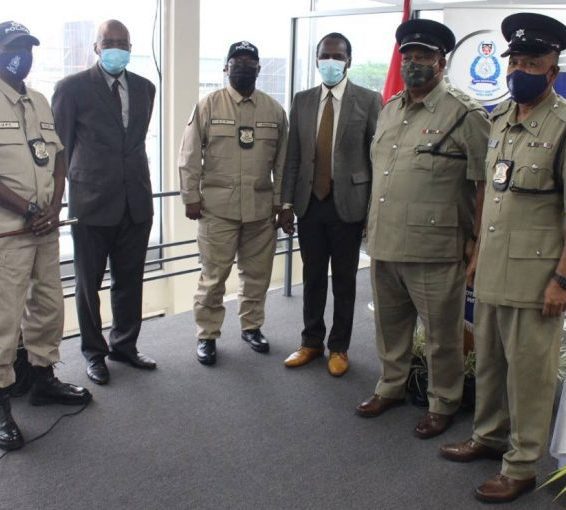 DCP McDonald Jacob, third from left, and National Security Minister Fitzgerald Hinds are flanked by chairman of the San Juan/ Laventille Regional Corporation Anthony Roberts and senior officers of the North Eastern Division at the launch of a Divali to Christmas anti-crime plan.
PHOTO COURTESY TTPS –

Police in the North Eastern Division will be increasing their visibility and patrols in different communities in anticipation of the Divali holiday and the Christmas season.

A police media release on Friday reported that National Security Minister Fitzgerald Hinds and Deputy Commissioner of Police McDonald Jacob, together with senior police in the North Eastern Division, were at the launch of the anti-crime plan at the Ibis Building, El Socorro.

In the release Jacob said it was the duty of all divisional heads to understand the needs of their respective divisions and implement strategies tailored to these communities to fight crime.

Referring to a crime-fighting technique called active directed patrols, Jacob said it would be useful to zone mobile and foot patrols to maximise response and added that the repurposing of the Barataria police station would serve as an operational command centre allowing for more effective co-ordination with officers on the ground.

Hinds commended the efforts of the officers and encouraged them to maintain a visible presence in communities as part of efforts to reassure citizens.

For his part Snr Supt Winston Maharaj admitted while there were shortfalls in policing, he was optimistic a combined effort from all units within the division and associated agencies, like the traffic wardens, would support the exercises.

Newsday spoke with senior police in the North Eastern Division who said part of the plan would involve a heavy police presence in Barataria and San Juan where there would be high traffic and a large concentration of businesses, while operational teams from the Inter Agency Task Force (IATF), the North Eastern Division Task Force, and the Guard and Emergency Branch (GEB) would carry out patrols and road checks in marginal areas.

The crime plan is expected to remain in effect until the first week of 2022.

Senior police in the division said in addition to “hard” policing tactics, the police would also engage in stakeholder consultation with the business community, taxi drivers and local government officials through community policing initiatives.

Diego Martin man gunned down while picking up daughter

He added that in the operation, crime-prevention would be just as important as investigation as officers reach out to different communities.

Despite being one of the smallest police divisions in Trinidad, police said part of the difficulty in addressing crime was it’s location between the Port of Spain, Central and Northern divisions.

Responding to concerns over private parties breaching covid19 regulations during the Christmas season, one officer said members of the gang unit and the division’s task force were prepared to tackle such incidents.

The crime plan is expected to be reviewed again in two weeks.