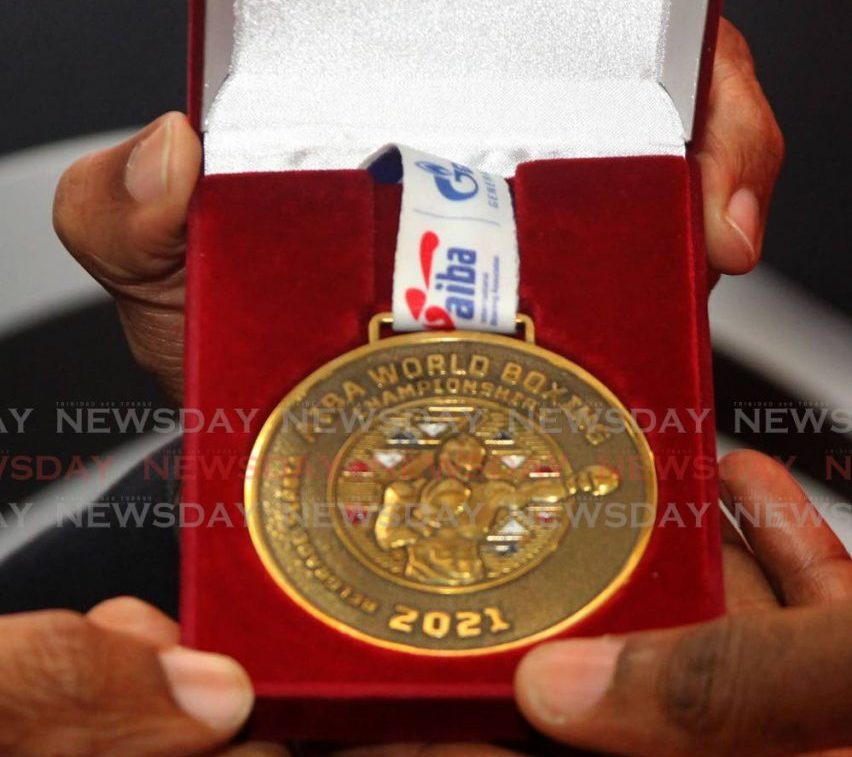 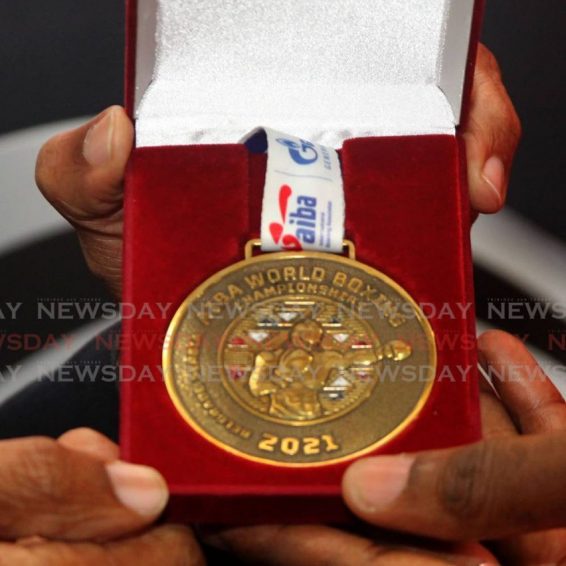 Paul and national boxing coach Reynold Cox paid a courtesy visit to the TTOC at its Abercromby Street, Port of Spain office on Friday and met its president Brian Lewis.

The super heavyweight boxer, who captured the nation’s first-ever AIBA World Championship medal, thanked the TTOC for its longstanding support to boxing.

“For the coaching staff and the TT Boxing Association, we have always had a lot of support from the Olympic Committee in terms of doing courses and workshops.

The AIBA World Championships super-heavyweight bronze medal, earned by Nigel Paul, is shown off by Paul at the TTOC office, Abercromby Street, Port of Spain on Friday. – ROGER JACOB

“We dedicate this medal to the hard work of the TTOC and for their dedication and support they have always given us. We wanted to share with them in the glory. Their commitment to supporting the sport and providing technical support has gone a long way,” said Cox.

The veteran coach said Paul will use the remainder of November to rest and recover after a hectic Worlds campaign.

On his way to a historic bronze, Paul, a 2016 Rio de Janeiro Olympian, defeated Albanian Nelson Hysa in his opening bout. He then boxed past Spain’s Ayoub Ghadfa on points in the round of 16 and advanced to the quarter-final.

The 32-year-old continued his spirited showing by beating Turkey’s Berat Acar 4:1 to set up a semi-final bout with Russian Federation’s Mark Petrovskii.

There, he lost 4-1 to Pterovskii, although scoring a powerful knockdown in the dying seconds of the last round. At this stage, both losing semi-finalists received a bronze medal each since there was no third place box-off.

“Nigel will take a rest for the rest of this month and return to training in December to prepare for the Commonwealth Games. He should also have some tournaments at the end of January so we do not want to wait until too late to resume our training,” Cox added.

PM: Government employees must vaccinate, or not be paid

The Commonwealth Games will be held in Birmingham, England from July 28 to August 8.

Additionally, TT completes its 2021 competitive season at the inaugural Junior Pan American Games in Colombia from November 21. TT will feature one boxer in Cali, Juan Rodriguez.

Cox closed, “Our eyes are now set on the Junior Pan Ams for this year but we anticipate and exciting 2022.”

TTOC president Lewis was pleased to meet with Paul and Cox and congratulated the boxer on his persistence.

“It was more than a courtesy call. It was also a show of appreciation for the support and encouragement from the TTOC. We had a conversation about Commonwealth Games, CAC and Pan Am Games etc.

“I congratulated him not only on his medal but his perseverance to rise from public ridicule. He is an example getting up and fighting. You cannot let setbacks and disappointments deter you,” said Lewis.