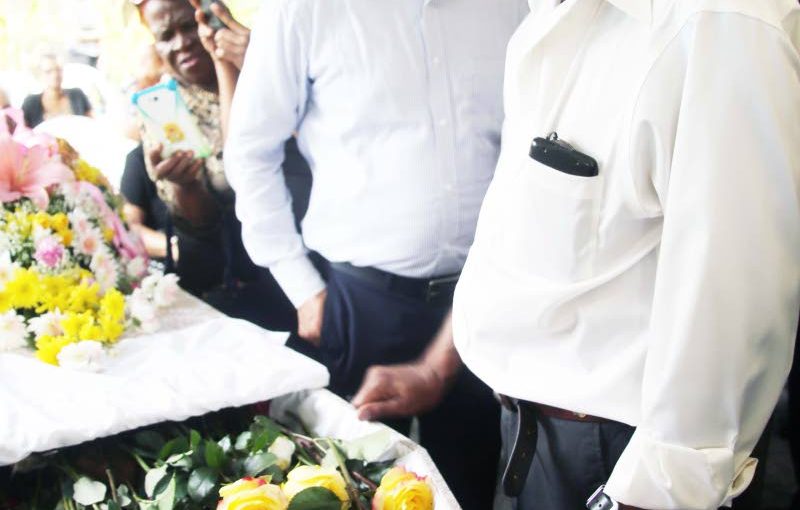 SHE was known as the secretary of Chaguanas-based attorney Mary Ramcharitar, but yesterday Nicole Debideen’s relatives remembered her as “super chef” and an adventurous person.

“The most memorable moment with her is the time we spent cooking. Aunty Nicole was like a super chef. She was very helpful in sharing her knowledge in cooking and I am very thankful for that,” said one of her nieces.

The niece was paying tribute to 44-year-old Debideen, née Hosein, at the funeral held at the family’s home yesterday at Stanford Street East in California. Debideen was found dead at her workplace, with her throat slit, on Friday morning. Ramcharitar made the gruesome discovery.

Marathons, the niece said, had become one of Debideen’s passions. “She shocked us by stepping out of her comfort zone and planning trips with my sister and I to go to different places. We planned hikes and were looking forward to more adventures.”

It was customary that Debideen spent time with family and so, from time to time, they would meet and “chat for long hours.”

About two hours before her body was found in the law office at Ramsaran Street, Debideen had attended service at the nearby church as was the norm. Yesterday, relatives said she loved to go to church and always invited them to join her.

Ramcharitar wept during the service. While viewing the body, she leaned over the coffin and, between sobs, said, “Nicole, Nicole” as if trying to get a response. She had been working for Ramcharitar for the past 14 years.

Debideen’s parents Shirley and Reynold Hosein sat near the coffin and greeted mourners. Pastor Emerson Santos of the Universal Church officiated saying that God would comfort the family in their time of grief.

Among the mourners were Couva South MP Rudranath Indarsingh and president of the Couva / Point Lisas Chamber of Commerce Ramchand Rajbal-Maharaj.

The MP said Debideen was the sixth constituent to be killed for the year. He extended condolences on behalf Opposition Leader Kamla Persad-Bissessar and criticised the Prime Minister Dr Keith Rowley-led administration.

“Nicole was a law-abiding citizen. I have asked the Prime Minister in the Parliament for the last two years to ensure there are joint patrols in Couva and environs. He told me that there is. I have not seen any.

“But he could tell the country that joint army patrols will return to the north and to the south. What is happening with the taxpaying citizens of Couva and central Trinidad?”

The post Nicole remembered as a ‘super chef’ appeared first on Trinidad and Tobago Newsday.

Mon Jun 25 , 2018
PETROTRIN registered their second straight win in the Super League, of the 2018 TT WoLF (Women’s League Football), with a 3-1 result over Club Sando at Guaracara Park, Pointe-a-Pierre on Saturday. Kayla Taylor scored twice for Petrotrin, with Khaline Jacob chipping in with the other goal for the victorious hosts. […]