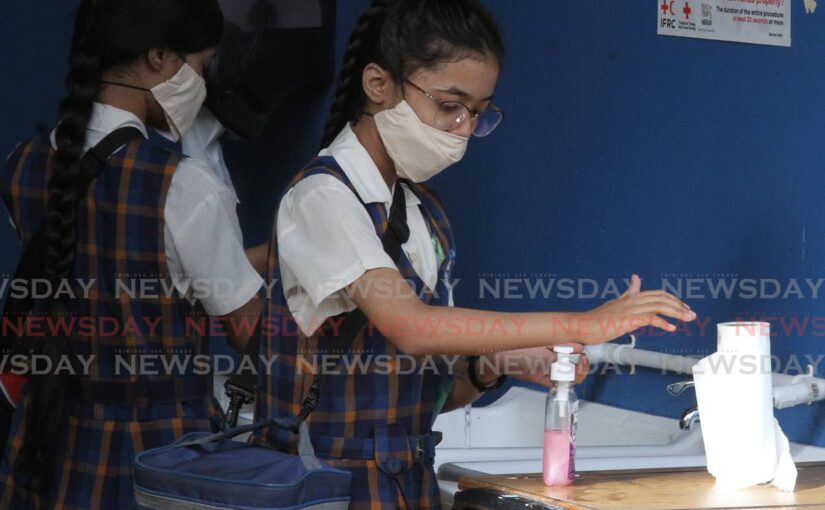 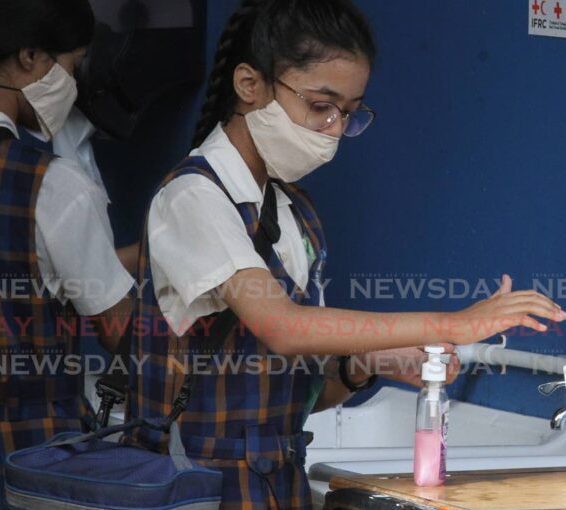 Standard five students of Grant Memorial Presbyterian School, San Fernando, wash their hands on before proceeding to class on July 1. Students were allowed to return to schools to prepare for the SEA exam on August 20. – File photo/Angelo Marcelle

Open Schools TT is calling on the Government to start planning for the physical reopening of kindergartens and primary schools, despite the growing number of covid19 cases, and has some suggestions to help make this happen.

Stacey Merry, founding member of Open Schools TT, said the organisation was formed in August before the start of the new school year in September. And since all secondary school students are set to return to physical classes early next year, the focus must be on pre- and primary schools.

On October 4, schools reopened for vaccinated forms four to six students and then for all students in these forms, regardless of their vaccination status, on October 25. Education Minister Dr Nyan Gadsby-Dolly, at a press conference on October 20, said all students in forms one to three will return to schools in January depending on the country’s epidemiological status. Pfizer vaccines are available only for children 12 and older.

However, Merry all children must return to schools sooner rather than later.

“We work with a lot of people at Servol and other NGOs. We’ve been connected with a lot of parents and kids who are really struggling through the online learning and it has become clear that the online school is not working,” she said.

Merry said thousands of students still have no devices, some of those who are online are not adapting well, and the children’s mental health gets worse every day.

“The youngest children are at the highest risk for learning, cognitive learning, and developmental loss. Under five are the critical years where children learn to socialise and learn to learn, which is a quote from (US) Dr Jane Bernstein. She wrote an article basically saying you could never get those pre-school years back, that those are critical years in brain formation in children.

“Children are not meant to be sitting at home behind a screen, they’re meant to be in class with their teachers and other students, learning. We are worried about where the children are at after two years, not just academically but in terms of their development.”

Merry said with daycares being closed, many single parents had to leave their jobs to care for their children and manage their education with reduced or no income.

“We just felt that the situation was not being addressed sufficiently by those in authority and so we are just trying to keep the national conversation going, keep the issue at the forefront and not give up because right now, TT is now of the last countries in the entire world to have kept such a large portion of their schools closed this entire time.”

She said studies show the risk of spread of covid19 in schools was equal or less than anywhere else in the community, and the transmission is greater from adult to adult.

She admitted social distancing was unlikely to occur in primary schools but, if the schools were well-ventilated, the children were masked and there was frequent hand-washing, the children should not be at any greater risk than anywhere else.

“The youngest children, who are the lowest spreaders and at the lowest risk of getting ill from covid19, are the ones who are suffering the most from schools being closed.”

She said the burden was on teachers, family members and the community to get vaccinated so children could have the opportunity to get an education in schools and be as safe as possible while doing so.

In the meantime, she believed small pre- and primary schools in rural communities could open tomorrow because the student population was small and there was adequate room for social distancing.

Open Schools TT offered several suggestions on how these schools could reopen, even if on a phased basis. They could also be applied to secondary schools and tertiary institutions.

Sinanan: All vessels are functional

Hybrid online: It would require the physical presence of both teacher and learner and combines the best parts of face-to-face and online learning, working via the online platform currently being used. Students should be at least be allowed to go to physical school on some days to see their teachers, and continue socialisation and integration learning.

TT virtual: A national virtual system, with dedicated online teachers, which follows the curriculum so that virtual learning would not be dependant on the capabilities of the school or teacher.

If a parent could not or did not want to send a child to school, or if a class or student has to quarantine, they could log on to one learning platform to participate in live teaching sessions, receive notes and perform self-correcting quizzes.

School Learning Management System (SLMS): This is an existing programme offered by the Ministry of Education (MOE) and available to all teachers and students free of charge through the ministry’s website. Teachers and students can access syllabi, lesson notes, videos, worksheets and solutions, and there is an interactive platform where questions can be posted and the experts respond.

TT Out of School Assistance Programme: For students who do not attend school in person, students using the SLMS, and students who collect the weekly or monthly packages from their respective schools, this assistance programme can go hand in hand with TT virtual. Teachers, substitute teachers, if necessary, could be “on call” during the school day to facilitate live feedback and assistance to students via messenger, email or telephone calls.

MOE Open Classroom: Children could watch the daily television programme where teachers give classes on TTT between 9 am and 11 am Monday to Friday.

Merry said after 20 months of schools being closed, each school should have been brought up to speed in terms of reliable connectivity and devices. But to those who have not, Open Schools TT suggested opening schools to corporate sponsorship via a temporary adopt-a-school programme. This could allow for upgraded school infrastructure and broadband connections as well as training for teachers so schools could put things in place to reopen. The ministry has an ongoing adopt-to-school initiative.

Gadsby-Dolly told Sunday Newsday she would be happy to hear any suggestions from the group, and expected to meet with stakeholders to discuss reopening primary schools in the coming week.