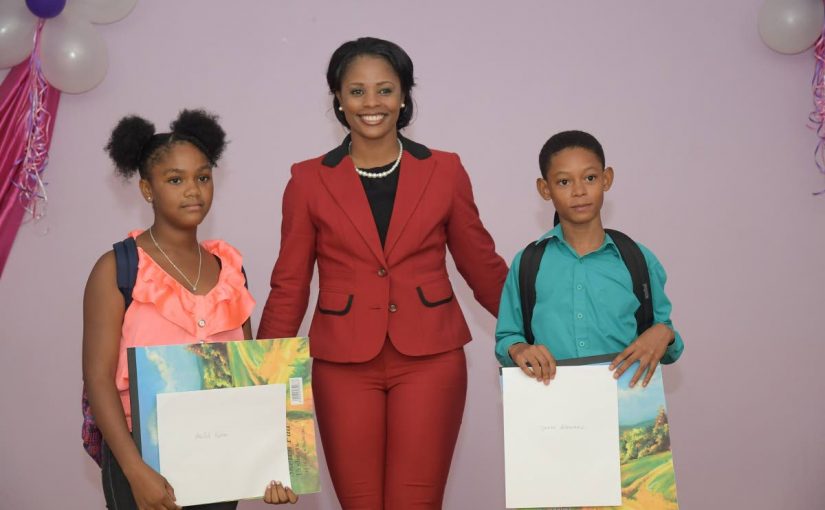 As the July/August vacation draws to an end, 330 primary and secondary school children from Marac, Morgua can look forward to the new term with new school supplies provided by West Indies cricketer and Atlantic sports ambassador Merissa Aguilleira.

At her annual Merissa Aguilleira Back to School Programme, the athlete distributed the supplies to children from Marac, La Lune, Penal Rock Road and the larger Moruga community. Special prizes were also given to Tyrese Bernard and Akeelah Nelson, the top male and female Secondary Entrance Assessment (SEA) students in the district.

The event was attended by representatives of LNG production company, Atlantic, which has sponsored the programme since its inception in 2013. Atlantic’s Branding and Sponsorships officer Anil Seunath said that the programme’s far-reaching impact had the potential to contribute to the process of national transformation.

“Atlantic has supported Merissa and her team with her back-to-school initiative for the last five years, and we’re happy every time we see these children getting empowered to excel just like Merissa has done in the world of cricket,” Seunath said. “We are big supporters of youth development and this programme puts students on the right track to succeed from the very first day of school.”

Moruga-born Aguilleira explained that the genesis of the annual book drive was her personal motto that “no one should be left behind.”

“Moruga has given me a strong support system and I am privileged to have the opportunity to relay that back to my home community,” Aguilleira said. “We are supporting the students so that they can remain focused on their education. We do not want them to face any obstacles in their education because of finances.”

Aguilleira said the programme’s growth over the years was additional inspiration to keep playing cricket.

“We have assisted over 300 children in primary and secondary children,” she said.

Tisha Mascall, parent of a first-time recipient, said she was grateful for the programme.

“I’m thankful that Merissa has gone out there and made something of herself but comes back and gives to the community. Moruga is proud of her.”

With a daughter in Basse Terre Primary School, Mascall added, “Many parents do not have easy access to the books and stationery. This initiative is a big help to the parents.”

Tue Aug 14 , 2018
THE Prime Minister has floated the idea of a national housing bond as an investment where people can deposit money which could then be used to buy houses from the Housing Development Corporation (HDC). At a key-distribution ceremony at Lake View Housing Development, Reid Road, Point Fortin, yesterday, Dr Rowley […]