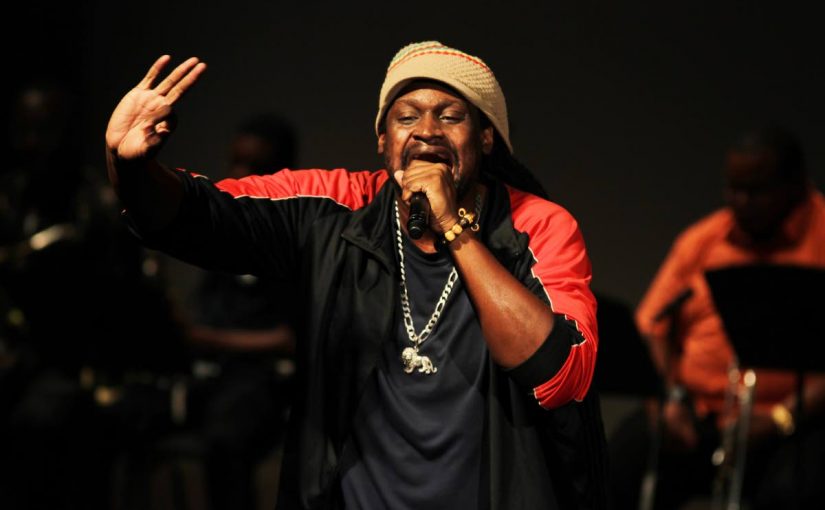 HE cuts a formidable presence on the stage with his towering height and hard-hitting lyrics.

Tomorrow, at the third installation of his concert series, Axe and Tracks, Mistah Shak (Selvon Noel) is promising to give fans an insight into his different facets that also includes love ballads.

This unique artist, who has lived Siparia since age three, said he is much more than the calypsonian he has been pigeon-holed to be. The concert to be staged at Infinity Bar and Lounge (formerly Atherly’s by the Park), San Fernando, is geared to show Shak’s different styles and modes.

Since he burst on the calypso scene in 2010 with Rougue, which took him to the Queen’s Park Savannah stage in Port of Spain, Shak has been seen primarily as a calypsonian.

“I embrace that because calypso is at the root of everything I do, but it is not the only genre in which I express myself.”

The concert is a collaboration between Trinfinity Arts, an entity which he is a part of, and Showkase Entertainment, a spin-off from the Tuco’s south central zone’s Kaiso Showkase tent.

“I have recorded everything from reggae songs and (other) songs, if I have to class them, I guess you could call them Caribbean alternative.”

Explaining the Axe and Tracks concept, Shak said it embraces two different performance styles in that the first half of the concert he will be performing an acoustic set with his guitar which is referred to in the musical world as the axe, along with ace percussionist Sheena Richardson known as Ajibola.

In the second half, the dynamic DJ Freedom International will make his appearance, mixing up Shak’s familiar and unfamiliar tracks as he does verse and chorus from about 30 of his compositions.

Featured artistes will also include calypsonian Trinidad Rio, saxophonist Oral Rodriguez, a member of the TT Police Band and Calissa Charles, who made her debut at the 2018 Calypso Fiesta with a song titled Circus which Shak co-wrote with her. Rodriguez is also Charles’ manager. MC is comedian Damion Melville.

In this land of calypso, outside of the Carnival season there are not many platforms for performers to showcase this indigenous art form.

Shak is trying to change that equation by creating spaces for himself and fellow artiste to exhibit their work.

“For me part of the mission as an artist and somebody seen as a calypsonian, is to continue to create the spaces for myself and for other artistes because there are not many calypsonians who are doing anything out of the season, outside of competition.

“Soca artistes, most of them, travel after Carnival. A couple of them have shows out of season but in terms of where calypso is concerned this is sorely lacking. I am not seeing calypsonians pooling together or trying to create that space.

“We, Trinfinity Arts are doing that in our own way and me personally as the artiste Mistah Shak. Showkase Entertainment has been trying to do that as well and we thought it made sense to collaborate for this show. What we are trying to do is to make calypso and the artform relevant outside the season and outside of the competition because people only see it as stuck in that box.

“The reality is that we see people winning monarchs and all kinds of things and after that you not hearing from them until Carnival comes around again. We are really trying to break that mould because we believe that our music is richer than that and is much more representative of our everyday lives than just in Carnival or in competitions.

“This is really one of the reasons why we are trying to put on these concerts, of course, it is a platform for me to gradually show people all of my facets, that I am more than calypso, Carnival or competitions or kaiso tent. For people to see me as that all-rounded artiste that I am and can be.”

Tickets are available at TUCO’s South Central office; City Hall, San Fernando and at the door.

Sat Jul 7 , 2018
CARIBBEAN fruits are indeed varied and complex in appearance and taste, from the rough and spiky-topped pineapple to the blemish-free, smooth-skinned mango. The velvety and tender texture of a sugary sapodilla contrasts with the pulp-covered seeds of the leathery and sour passion fruit, the bland barbadine and the tart and […]