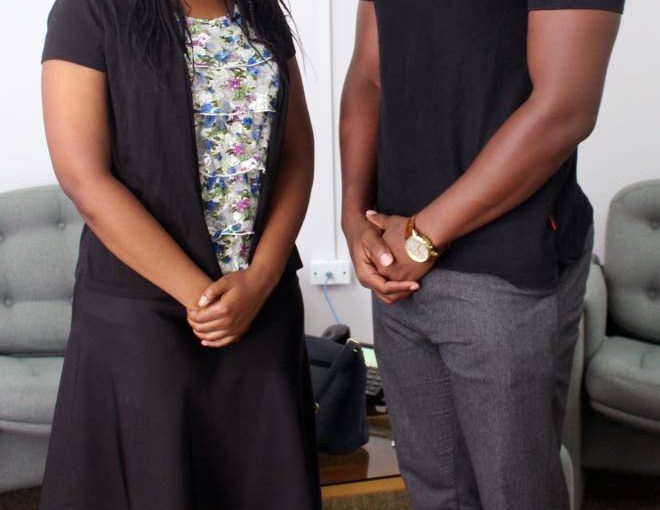 THE MINISTRY of Education published the call for five medical studies scholarships from the Cuban Government on May 1, three undergraduate and two postgraduate. Kyla Thomas, 20, and Darryan Cornwall, 23, are two of the lucky undergraduate scholarship recipients.

They left yesterday to take up their scholarships in Cuba.

Newsday, in an August 9 article, reported that Health Minister Terrence Deyalsingh had announced that a team would go to Cuba to recruit 250 healthcare specialists in 11 different fields. The Deyalsingh said specialists, critically needed at the TT’s health institutions, could not be sourced locally.

Cornwall and Thomas both hope to eventually specialise, with paediatrics being high on their specialisation list. But their desire to study medicine came from separate medical incidents in their lives.

“Since I was around five-years-old I wanted to be a doctor and I just stuck with it. Especially when I was around eight-years-old and my mother died,” Thomas said in an interview with Newsday.

And Cornwall’s desire to study medicine came after his brother lost his eye.

“My journey began at a really young age. My younger brother lost one of his eyes in an accident. The door swung in and he lost his right eye. At that point I said okay, I want to dedicate myself to medicine and, in any way possible, see if I can help him get back his eye. And knowing now it is impossible. Maybe I can help other people, in situations that he was in,” Cornwall said.

Thomas found out about the scholarship while helping her cousin with finding newspaper articles for a school assignment.

“Then I came across an article with some Cuban scholars and I saw one of my friends from USC and I messaged her. She told me how she applied for the scholarship and I just applied,” she added.

After applying on June 1, Thomas was interviewed the next week for the scholarship.

Although they knew each other at school, neither knew the other had applied for the scholarship until they learned they got it.

They both believe prayer and family support will see them through the seven years in Cuba. “Although our family won’t be going to Cuba with us, just knowing that they are there backing us and supporting us, I think we will get through,” Thomas said.

Thomas and Cornwall want to work in the public healthcare sector not only because of the scholarship requirements but because of a desire “to serve people, not money,” Thomas said.

“I intend to help the public in whatever way I can. That was my intention before I signed up for this scholarship,” she added.

She is also not worried about falling away from the noble ideals of serving people since her family instilled values of helping people in her, as opposed to materialism.

“Money comes and goes but lives matter,” she said.

Thomas who lives with grandmother, Mary Ash, said when she heard the news “she screamed, she cried and was happy.

Her aunt and uncle, Rosaline Ash-Brewster and Joseph Brewster, with whom she stayed while going to USC, were also happy and cried tears of joy when they heard of her accomplishments.

Besides Cornwall’s father, who works as a patient escort at Mt Hope Women’s Hospital, none of their other immediate family members work in the medical field.

Ultimately, Thomas’ ideology is if she “could make a difference in the life of one person then she has accomplished her goal.”

Cornwall hopes to work with underprivileged children and give back as much as he can.

Brown Girl to screen at TTFF

Wed Aug 29 , 2018
BROWN Girl Begins, an award-winning feature film directed by Sharon Lewis, will have its TT premiere at the Trinidad and Tobago Film Festival (TTFF) in Port of Spain. The film is inspired by Jamaican/Canadian author Nalo Hopkinson’s award-winning novel, Brown Girl in the Ring. Brown Girl Begins, written by Lewis, […]