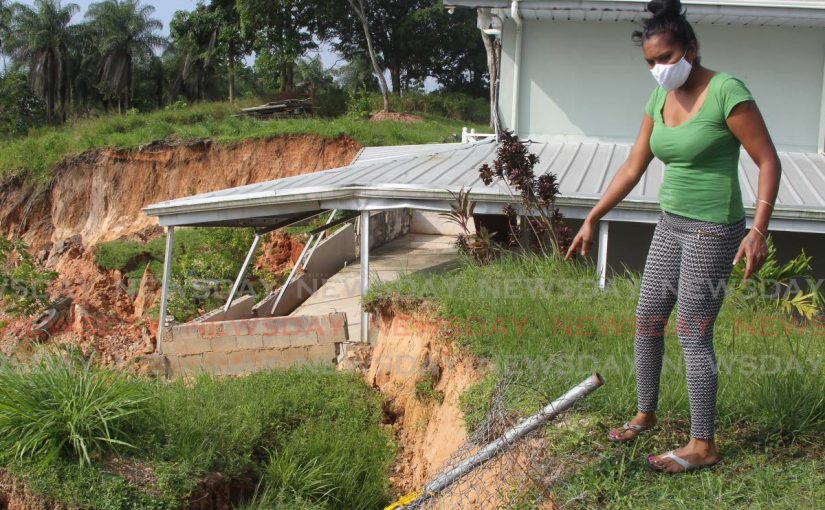 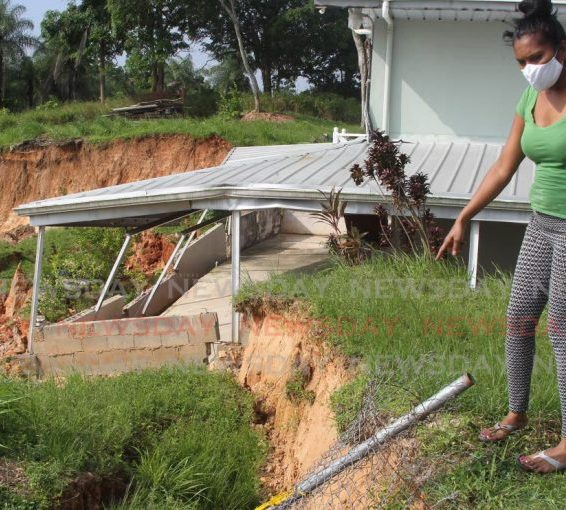 In this file photo, Kamla Harripersad points to land slippage affecting the back portion of her home on Diamond Road, Belle Vue, Claxton Bay on October 29. On September 15, 2021 a major landslide caused by nearby quarrying affected several homes forcing residents to flee their properties. – Photo by Lincoln Holder

RESIDENTS of Belle Vue, Claxton Bay, whose homes were damaged by a major landslip on September 15, are worried that no one has offered any tangible help to them since the incident happened and  also worried about the continued danger that the landslip poses to their safety and their homes.

Pensioner Marva Fritz, 67, said, “The place is still caving.” She said because the land to the back of their properties is soft, there is movement whenever rain falls in the area. Fritz said residents are hoping and praying for their safety and that their homes are not compromised any more than they already have been.

Asked whether if they received any help since the incident happened two months ago, Fritz said, “Everybody comes and goes.” She said the residents have been told by the various people who have visited the area to see the damage to be patient.

Fritz said Pointe-a-Pierre MP David Lee was among the people who has been giving them hope that they could get some help soon.

Another resident Giles Garcia, 62, agreed with Fritz. “That is very disheartening.

“The last visit we had from the EMBD (Estate Management Business Development Co) was to do some valuation. That was yesterday (November 12).”

Garcia said he and his wife Anastasia have been able to find temporary accommodation nearby, in order to reduce the load on their house. Other residents, Garcia said, were staying in their homes, even though they had no electricity and no doors.

On November 12, Lee raised the issue as a matter on the adjournment of the House of Representatives.

“I filed this matter on September 16 and I was hoping by now, the families that I have been talking about, would have gotten some clarity on the disaster that happened to their homes.” Lee said the landslip was related to excavation activity at a nearby sand quarry.

“The events of September 15, 2021 is no minor incident but a flat out disaster that has caused great trauma to at least over 15 individuals and four families and their homes.”

Residents have either had to sleep in their cars or seek temporary shelter with relatives.

“I called for immediate action from the government so these families can begin rebuilding their lives. I urged the Prime Minister to assist these families who face grave turmoil from losing the precious assets of their homes.”

Lee reiterated his call for an investigation as to whether the buffer zone of the nearby Coco Road sand quarry was breached and for residents to be provided with the findings of such an investigation.

Lee said Agriculture Minister Clarence Rambharat directed work at the quarry to be  stopped to determine the cause of the incident, but it resumed two weeks ago, threatening further damage to the houses.

In response, Rambharat said there was no indiscriminate quarrying at Coco Road, which is “one of the few licensed quarries in this country.” Rambharat said pre-2009, this quarry operated “without any form of statutory cover.”

“We fixed that and I am confident that the Coco Road quarry operates completely within the laws of TT.”

He said preliminary investigations on the landslip point out “that the incident happened 170 metres from the buffer zone.”

But out of caution, the EMBD suspended work at the quarry. Subsequently, Rambharat said the EMBD authorised the resumption of work “far from the affected area.”

On the issue of liability, Rambharat said that was either for a state entity or the courts to determine. “This is not an EMBD-sanctioned quarry. This is a licensed quarry, operating within the law.”