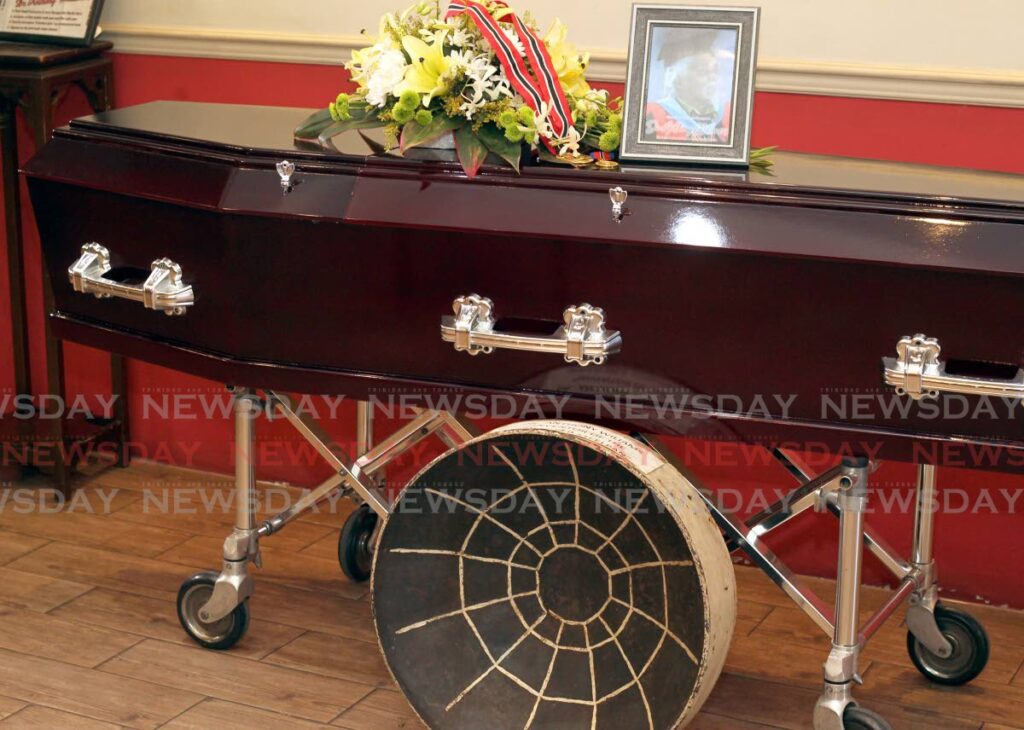 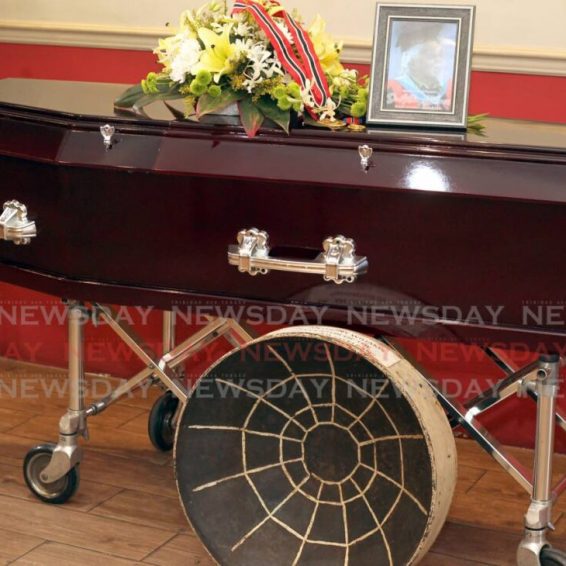 News
The memorial photo of Dr. Anthony Williams, alongside his national awards, the Order of the Republic of Trinidad and Tobago(ORTT) in 2008 and the Chaconia Medal (Gold) in 1992. – ROGER JACOB

Speaking at his funeral on Thursday, family friend Kenneth Clarke said Williams, who was born on June 24, 1931, at the Port of Spain General Hospital to parents Carmen Roberts and Oscar Williams, was a humble, mysterious, and helpful youth.

Clarke said Williams was self-taught as a welder, mason, and carpenter, who worked as a carpenter with the Ministry of Works in Laventille. He said Williams redesigned his house in Nepal Street in 1958 by creating his own mould to make blocks, and part of the reason for the redesign was that he wanted his grandmother Hilda to live a happy life.

“Tony was introduced to pan in 1944 at the age of 13. He became an ace ‘ping-pong’ or tenor pan player and made his first tenor pan with a biscuit tin of approximately eight inches, with eight notes, and played the first part of Mary Had A Little Lamb.”

Clarke said Williams became a member of the Nob Hill Steel Band in 1946, moving to Sun Valley Steel Band in the same year. In 1950, he became a member of Northern Stars after Sun Valley leader Felix Roach decided to leave. Northern Stars moved to Kandahar/Bombay Street, eventually changing its name to North Stars after the 1951 Carnival, as the name was too big to fit on jerseys.

He said in 1951, Williams was chosen as one of the two members of his band to join the Trinidad All Steel Percussion Orchestra (TASPO).

“The Steelband Association, in order to curb the riots of the steelbands fighting each other, decided to send a steelband to the Festival of (Britain), and asked each steelband to send two representatives. Of that list, only one remains alive right now. Tony played a tenor boom, the equivalent of a triple guitar pan, made from a biscuit drum. He changed it to an oil drum, producing a different tonal improvisation. During that tour, Lieut Griffith introduced them to 12 notes. Since they were all tuners and players, the transition to a full chromatic scale was not a challenge.”

Clarke said the experience was productive, as they created an evolution in pan. On returning from the tour, North Stars moved to 59 Bombay Street.

“He continued his innovations in developing the instrument, creating a massive movement in Kandahar and nearby areas in St James. The majority of people got involved and changed the concept of the long-time badjohn-ism integrated into panmen, bringing discipline and respect, excellent players of all ages. People became tuners because of him. Everyone respected him.”

Williams developed the spiderweb pan in 1953, which is used currently, where the notes are placed in fourths and fifths with octaves below each note. He went on to create the double second strumming pan and the double guitar pan. Clarke said Williams made improvements in different ranges of pan.

Clarke said Williams worked with many other bands and in 1955 he was instrumental in moving pans from being hung around the neck to being played on stands and then on wheels.

The band became the Pan Am Jet North Stars when the airline began sponsoring the band. The band placed first in Panorama in 1963 with Dan is the Man in the Van, the first Panorama song. It went on tour around the Caribbean to Jamaica, Antigua, and other islands, as part of Pan Am’s marketing strategy to bring tourists to Trinidad. In 1964 the band was invited to do a historical tour to the US, where it participated in the Macy’s Day Parade and appeared on the Ed Sullivan Show.

Clarke called on the decision-makers to continue Williams’ legacy by creating a centre for research and innovation into pan in TT, and also to work on marketing the pan as being from TT.

Beer drinkers scarce around Port of Spain after price hike

Pan Trinbago vice president Keith Simpson extended condolences to the family and friends of Williams, especially relative and long-time caregiver Yoland Thomas. He thanked the Big 5 steelbands which had helped with the funeral. He said Pan Trinbago would have a memorial for Williams in 2022.

In front the casket rests one of the first signature steel pan fabricated and tuned by Anthony Williams in his early years in the steelband movement. – ROGER JACOB

He said Williams received the Chaconia Medal (Gold) in 1992, and the Order of the Republic of TT, presented by President George Maxwell Richards, in 2008. In 2016, he was awarded the honorary doctor of letters (DLitt) by UWI for inspired innovation, and for his national, regional, and global contributions in the field of culture.

Daughter Shermika Thomas said Williams was always thankful for everything he was given.

“The house is so quiet with you gone. I’ve passed by your room so many times and peeked inside, forgetting you weren’t there. You believed knowledge and ideas were never to be kept to oneself. Not a second passes that you aren’t on our minds. As we lay you to rest, may you rest in peace.”