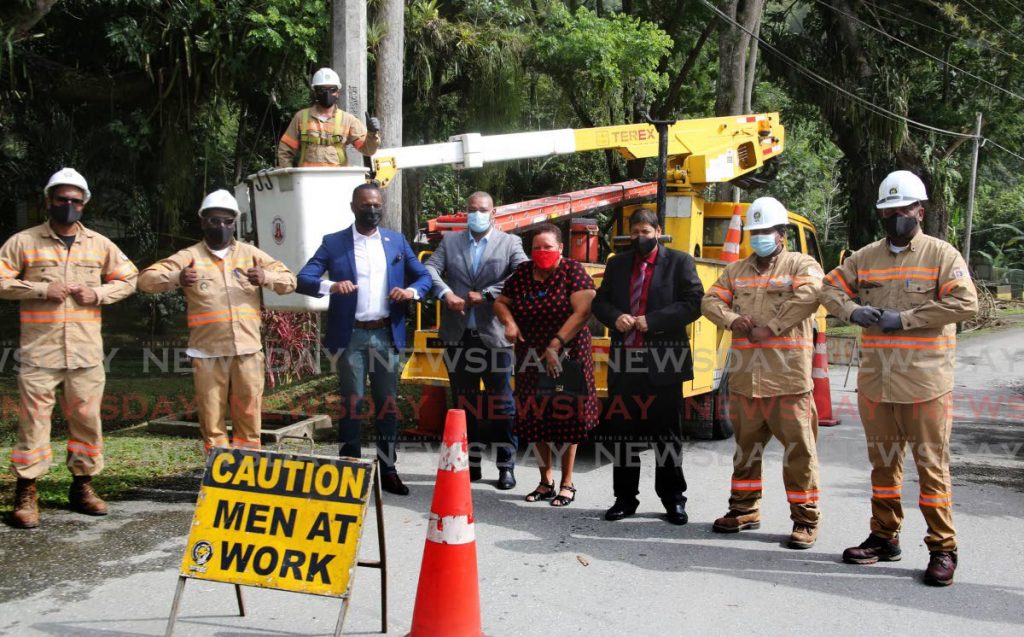 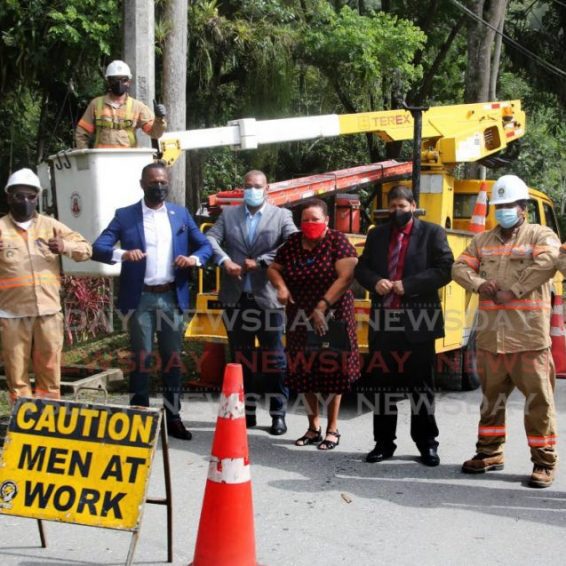 A T&TEC technician switches on a new street light at the launch of the T&TEC Illumination project in La Pastora, Lopinot, Tuesday. – Photo by Sureash Cholai

Residents of La Pastora can look forward to brighter nights ahead with the introduction of 100 LED street lights along a portion of the Lopinot Road.

The street lights were installed as part of the La Pastora illumination project, which was rolled out by the TT Electricity Commission (TTEC) and the Ministry of Public Utilities.

Speaking at a joint ceremony for the commissioning of the street lights and the launch of the Water and Sewerage Authority’s (WASA) Community Water Improvement Programme (CWIP) at the La Veronica RC Church, Lopinot, on Tuesday, Minister of Public Utilities Marvin Gonzales vowed to improve the quality of utility services in communities which were traditionally underseved.

Gonzales who is also the MP for Lopinot/ Bon Air West said he took a vested interest in boosting connectivity in different communities despite financial constraints.

La Pastora is a hilly community with sharp corners and steep cliffs.

Recalling a recent visit to the area after dark, Gonzales said he saw firsthand the need for street lights.

“It dawned on me I am the Minister of Public Utilities and therefore it falls as my responsibility to correct that and my advisor and I spoke, we had a meeting, I had a meeting with my permanent secretary. I had a discussion with TTEC and very soon after, the lighting project started.”

Gonzales said the installation of the lights was a major milestone for the community, noting that generations of La Pastora residents would have lived in the area without street lights and promised that plans better services for electricity and water supplies were underway.

He added street-lighting in TT cost the government $111 million annually.

Minister of Public Utilities and MP for Lopinot/Bon Air Marvin Gonzales, third from left, with La Pastora residents and T&TEC personnel at the launch of an illumination project in the area on Tuesday. – Photo by Sureash Cholai

General manager of TTEC Kelvin Ramsook admitted the project was long overdue and attributed the extended delay to funding issues.

Ramsook who also worked in TTEC’s eastern zone for 19 years said he was amazed that residents lived in the area without street lights for such a long period, noting the danger of travelling or driving in an area with steep cliffs without proper lighting.

Bishops/Trinity East chairman: Everything under control

“You’re blessed here but I want to say I don’t know how you survived all these years without these street lights because even during the day light and getting here you can make a slip and end up off road and that’s day light.

“What happens if it’s raining and it’s night?

“I don’t know what transpired here, so many years past and you really never got street lights but funding and all the other issues would have prevented you from getting the lights, today though you have 100 poles that were installed here.”

Ramsook said the LED lights had a lifespan of ten to 15 years which made them more energy-efficient and environmentally friendly.

The street lights cover a span of seven kilometres of the Lopinot Road.

For her part, lifelong La Pastora resident Brenda Salina said she was pleased with the project and was optimistic it would attract more development to the community which had grown in size over the past decade.

Recalling her son’s experience returning late from work one evening years ago, Salina said he had to run from the Lopinot Junction in the darkness for fear of his own safety before eventually getting a lift home from a passer-by.