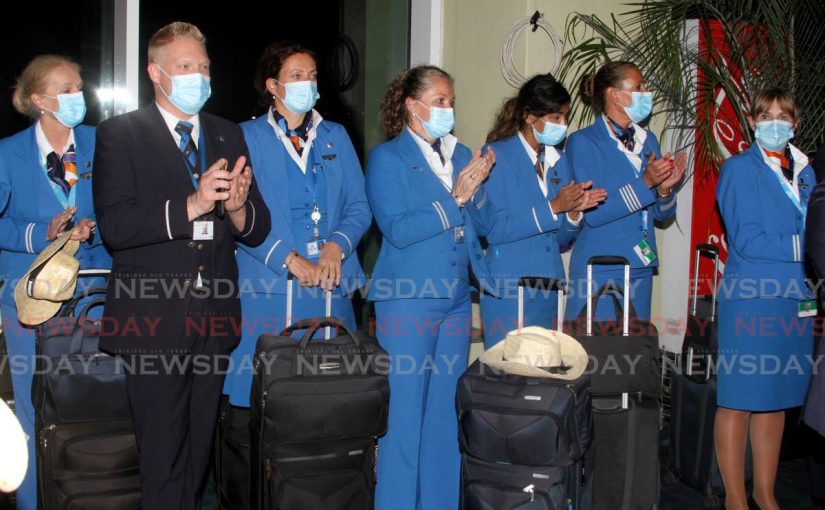 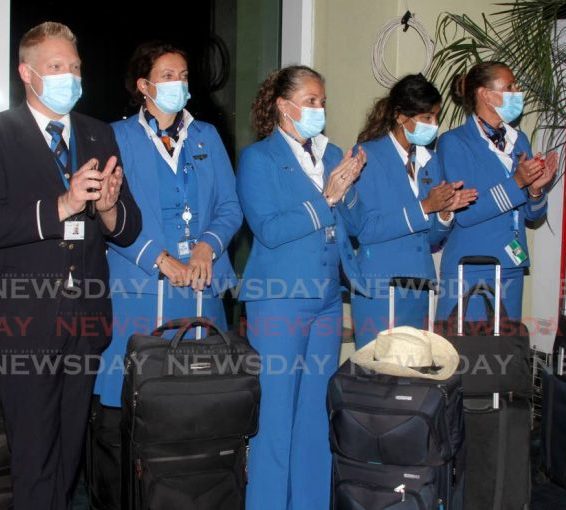 WELCOME BACK: KLM Royal Dutch Airlines staff applaud at a function held in their honour at the Piarco International Airport on Saturday when the airline made its inaugural flight on its return to TT after two decades. – Photo by Angelo Marcelle

After 20 years, KLM Royal Dutch Airlines returned to the shores of Trinidad and Tobago.

Around 6 pm on Saturday, the airbus A330-300 landed at Piarco International Airport and was welcomed by the Minister of Works and Transport Rohan Sinanan, Minister of Tourism, Culture and the Arts Randall Mitchell, Ambassador of the Kingdom of the Netherlands to TT Raphaël Varga van Kibèd, deputy chairman of the Airports Authority James Philbert and others.

KLM’s strategy, he explained, included expanding to regions where there would be quick recovery from the covid19 pandemic, in which TT was identified.

“Increasing linkages with the rest of the world will ensure that our nation appears as a destination for investment, tourism and will facilitate air travel for import and export,” he explained.

Sinanan added that the government has several initiatives to increase the efficiency of the local aviation industry and the Ministry of Works and Transport was working to finalise a framework and policy to enhance the sector.

“I also look forward to the expansion of the aero-drome, where we do have a lot of commercial enquiries and the intention is to make the Piarco airport a hub for aviation activities. We are expecting additional hotels in the area, the Hilton Hotel has an interest and is about to have a sod turning.”

Mitchell added that the connection would be a good opportunity to promote TT’s culture to Europe and vice versa and as TT continued to attract international interest, it was encouraged by the opportunities the new route presented.

“European visitors will have the opportunity for a complete cultural immersion during our world-famous Carnival and then hop on a flight or ferry to experience the sun, sea sand of Tobago. Not to mention the eco-tourism opportunities.

“Trinbagonians can visit Amsterdam and experience the culture and heritage of the city and one of the most innovative nations in the world,” Mitchell said.

The service will be offered on Mondays, Thursdays and Saturdays, via the route Amsterdam – Barbados –Trinidad.

KLM first arrived in TT and the Caribbean in 1938 and flew to Barbados four times a week, twice per week to Curaçao and once to Paramaribo, Suriname.

Conditions at Piarco International Airport were not favourable to KLM and flooding caused it to suspend their air service for a month and later suspended services due to the war in Europe.