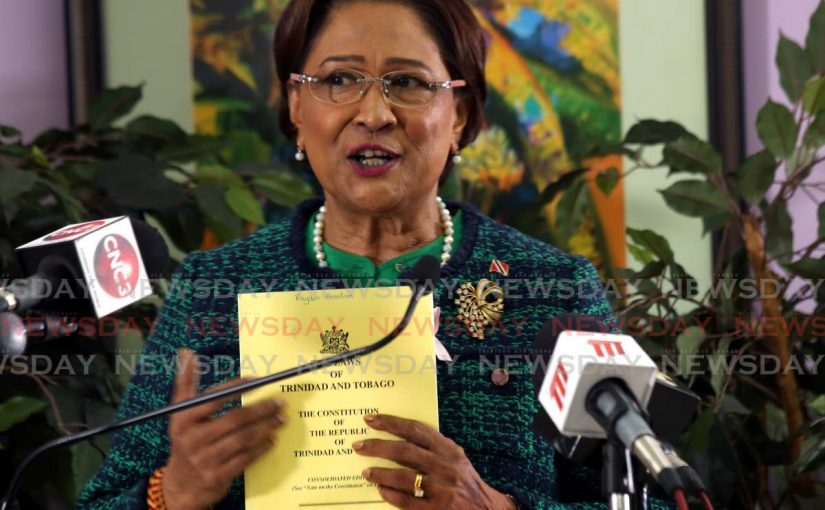 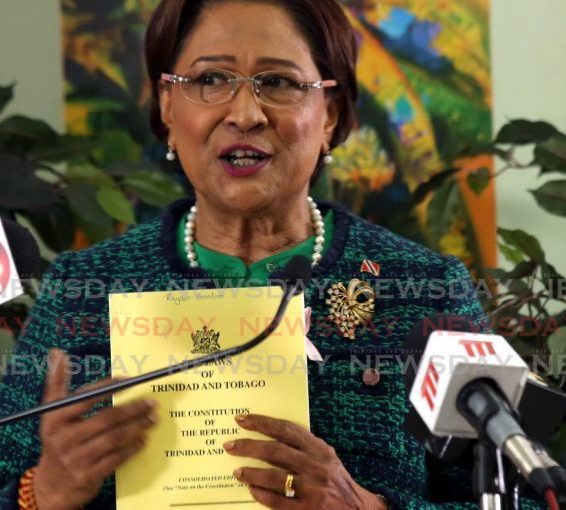 Opposition Leader Kamla Persad-Bissessar holds a copy of the Constitution at a news conference held at the Office of the Opposition Leader in Port of Spain on Thursday. – PHOTO BY SUREASH CHOLAI

OPPOSITION LEADER Kamla Persad-Bissessar believes that the completed merit list by the recently-collapsed Police Service Commission (PSC) is now tainted and the process for selecting a commissioner of police should start all over.

At a media conference at the Office of the Opposition Leader in Port of Spain, Persad-Bissessar said the current list was tainted by the past PSC whose members all resigned amidst the bungling over the acting appointment of former police commissioner Gary Griffith and, later, the appointment of Deputy Commissioner of Police Mc Donald Jacob to act.

The Opposition Leader was responding to the ruling of High Court Judge Justice Nadia Kangaloo who declared that acting appointments of both men were unconstitutional and invalid.

This effectively left the police service without a substantive commissioner or an acting one.

Asked what the next step should be since the previous PSC completed its merit list,

Persad-Bissessar said: “My respectful view, and I did a little research on it, I think it is dead. The manner in which the PSC conducted itself invalidates and tarnishes any list that they may have put forward – any list, whether it is for acting or substantive. We will do some more research and see if that list can come like Lazarus and rise from the dead.”

She said the judgement means the police service is now leaderless.

“The commissioner is the accounting officer. In other ministries you have a permanent secretary to sign off on certain things for things to get done. What’s going to happen with all those matters? Who will sign off in the absence of this commissioner or acting commissioner? What effect will this have on the morale of the TTPS? They are rudderless, headless.”

Persad-Bissessar said this is the first time in the history of the country that there will not be someone in the commissioner’s chair. This comes as there is increased crime, she said.

She reiterated an earlier statement that President Paula-Mae Weekes has no moral or ethical authority to propose names for the re-establishment of a PSC, until she clarifies what prevented the former PSC from submitting its completed merit list of selected candidates. She said Weekes should either speak up or resign.

The court matter was filed by social activist Ravi Balgobin Maharaj who challenged the PSC’s appointment of Griffith to act with effect from August 17 after his three-year contract expired.

The PSC collapsed after the four-member team each resigned days apart from each other. The resignations were prompted after then chairman Bliss Seepersad allegedly took a unilateral decision to suspend Griffith while he was on leave for two weeks. Griffith sued the PSC and there was an out-of-court agreement that he would defer his resumption of duty.

The suspension stemmed from an investigation initiated by the PSC on September 1, headed by retired Justice of Appeal Stanley John, into allegations of corruption in the issuing of firearm user’s licences; and the police handling of an incident at sea involving Christian Chandler, the head of the police legal unit.

On the issue of comments made by Opposition Senator David Nakhid, who described the President as an “insipid jack—,” Persad-Bissessar said any call for him to resign over that was “scraping the barrel, a distraction, and a red herring.”

But Persad-Bissessar said it was Dr Rowley who introduced the word jack— to the country’s public lexicon when he called on the population to not “jack— d ting” in relation to their behaviour which had the potential to spread covid19.

Asked if Nakhid’s statements were the sentiments of the party, Persad-Bissessar said she had no view on the matter.

“He (the Prime Minister) should be the last person to raise such a matter. When he comes to apologise for his kind of language, then we will have a different take on it. But, for the moment, he has no leg to stand on or his government.”