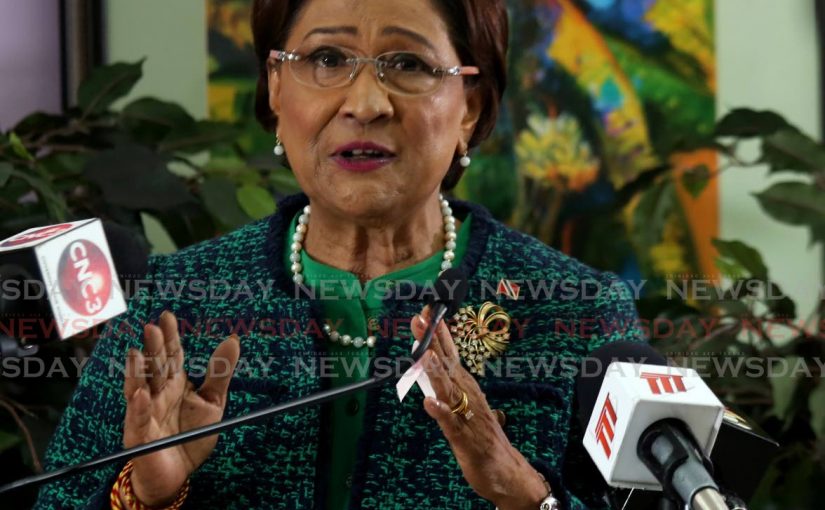 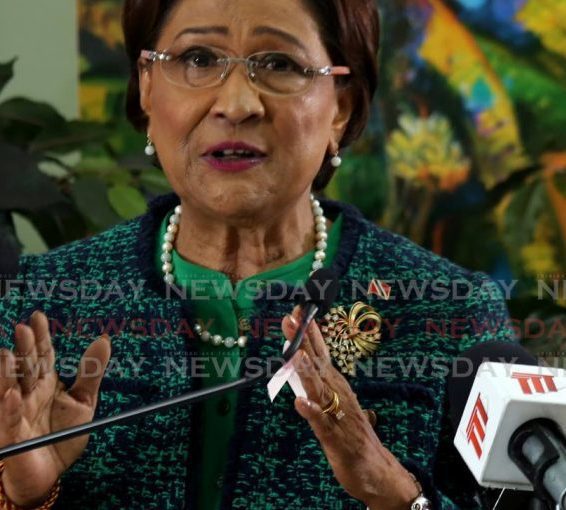 Kamla: ‘October Revolution’ not about violence, but peace

OPPOSITION Leader Kamla Persad-Bissessar is defending her call for an “October Revolution,” saying it is not about destabilising the nation.

“The revolution has begun. This is not a revolution of violence, of ill-will or any malice to destabilise our nation. So do not be fooled with the narrative they are coming with.

“The October Revolution will save TT from Keith Rowley and the PNM. It is a movement, local, national and international, to build a modern parliamentary democracy in TT, built upon the foundation of the Constitution and the law.

“Our revolution would be a peaceful one united in purpose aimed at politically demolishing those forces which prevent the citizens of our nation from enjoying the standard of living they deserve and preventing our citizens from accomplishing the goals they have and prevent them from progressing.”

Addressing supporters through the virtual United National Congress (UNC) platform on Monday night, Persad-Bissessar said, “This is something we must do as we battle this Rowley dictatorship. As we battled the Rowley regime’s attempts to stifle democracy.”

The October Revolution originally referred to the Russian Revolution of October 1917 which ended the rule of the Czars and gave birth to the Soviet Union.

Persad-Bissessar said like that revolution, “We are here to fight against the abusive power by would-be kings, queens, czars, and czarinas. We are fighting for a democratic republic, against the PNM and Rowley dictatorship.”

She said while it continues to engage in parliamentary action, the UNC will also carry out simultaneous action online, on the ground, the streets, with public education and participation, international outreach, and outreach to non-traditional voters.

“Also, with all other people who love freedom and democracy in TT and do not want to be ruled over by a Rowley dictatorship.”

Last weekend several UNC-controlled constituencies signalled the start of the October Revolution by engaging in demonstrations to highlight numerous ills relating to bad roads, lack of water, infrastructural and other problems.

“Our revolution will be of united strength to stand up to those in our nation who believe they have the divine rights of kings and queens.

“The corruption, neglect and mismanagement of the Rowley regime have spread like a virus to every public institution of our nation, plunging us into a national crisis.

“For too long they have burdened you with high taxes without equitable returns in our own lives.

“For too long they have abandoned the issues we need to live, such as your right to proper roads, jobs, affordable food, addressing crime and even education for our children.

“Hand in hand, we lead the October Revolution to say to you that you and TT deserve better.”