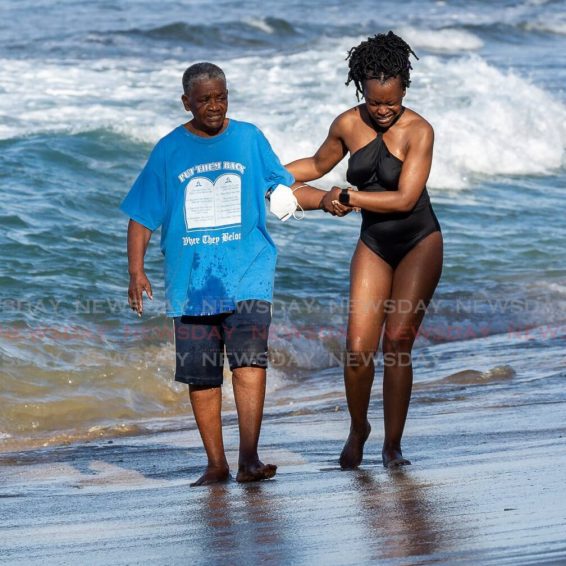 Tobago
A wave crashes on the backs of beachgoers at Store Bay on Monday. Beaches across the country were reopened on Monday, from 5am to noon, after eight months of closure as a measure to protect against the spread of covid19. – David Reid

The reopening of beaches brought tremendous joy in Tobago on Monday morning as people flocked to their favourite salt-water spots.

The joy was not just from those who took a dip, but also relieved small business owners who enjoyed some much-needed commercial activity.

Newsday visited Store Bay, Pigeon Point and Mt Irvine on Monday where there were scores of people.

At the latter, there appeared to be no problems with social distancing. There was also a constant police presence to ensure compliance with the public health measures including no loud music, no alcohol, and mask wearing when not in the water.

A full complement of life-guards was also on duty along with other workers from the tourism division of the Tobago House of Assembly.

FUN IN THE SAND: Alexandra Forgenie, 3, plays in the sand with her mother Andrea Forgenie at Store Bay on Monday. – David Reid

One lifeguard, who spoke anonymously, said they were being paid when the beaches were closed.

They were told to report for duty from 5 am today. He said there were at least 60 people at the beach by 6 am.

Some of the elderly at Mt Irvine said they were glad to be out for the therapy and aquatic massage.

Some people who came from abroad to visit their families for Christmas were pleasantly surprised they were allowed to take a sea bath, because beaches were closed when they booked their trips.

One woman said the Government should have implemented an hours restriction long ago instead of closing the beaches, because the health benefits derived are too important.

Osic Mundy, 22, of Bethel said he and his friends usually have a buzzing trade selling craft and fruits on the Mt Irvine beach.

“We are youths, and when the beach closed we had nothing to do. They should not have closed the beach in the first place, because the beach is the healing of the nation,” Mundy said.

Marlene Murray, 79, is held by her daughter Dorcas Murray after taking a sea bath at Mt Irvine on Monday morning. – David Reid

“How the beach open we feel good because we could start back to sell, even though we find the hours limited.”

Mundy said he and his friends could now play football on the beach and relax.

An employee of Anchor Bar and Grill on the beach said they reopened in October when the government gave the all-clear, but business was extremely slow. However, the reopening of beaches on Monday has left the employee feeling encouraged and optimistic for better sales.