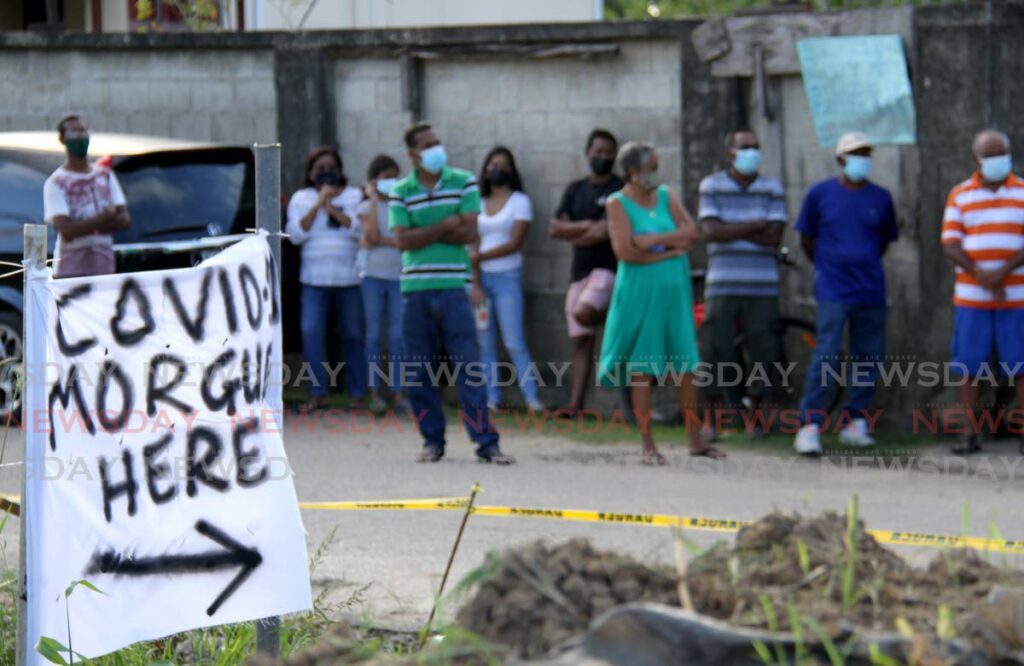 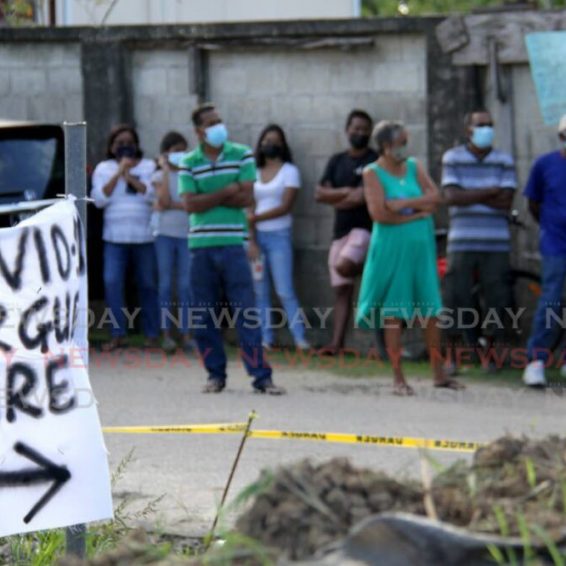 News
Member for Couva South Rudranath Indarsingh and residents of Beaucarro Road, Freeport in Couva raise their hands in victory as they stand outside the proposed site of a storage facility for the bodies of covid19 victims. Photo by Ayanna Kinsale

Couva South MP Rudranath Indarsingh is claiming victory in his fight against the Ministry of Health’s plan to open a mega-storage facility for covid19 fatalities on Beaucarro Road, Freeport, in early January.

On December 18, Chief Medical Officer Dr Roshan Parasram indicated the ministry’s interest in setting up a large storage facility for covid19 fatalities as morgues were running out of space.

But when residents of Beaucarro Road learned that an unfinished warehouse along the road was the planned site, they immediately rejected the idea.

On December 23, residents met with Indarsingh to voice their concerns and even warned the ministrt they would form a human barricade in front of the warehouse to ensure it couldn’t be used.

Residents also started a petition to demand the health authorities meet with them.

But on Monday afternoon, Indarsingh met with residents again and claimed plans for the facility had been scrapped.

Indarsingh told Newsday he was briefed on the decision in a phone call on Monday with president of the Association of Funeral Home Professionals of Trinidad and Tobago Keith Belgrove.

When contacted to confirm the news, Health Ministry corporate communications manager Candice Alcantara referred Newsday to Belgrove for a comment. But Newsday was unable to contact Belgrove.

Newsday was also unable to confirm the news with Health Minister Terrence Deyalsingh or Parasram.

Indarsingh said while Belgrove’s decision was welcome, there should never have been plans to open the facility in any residential area.

He explained, “I received a phone call from Mr Keith Belgrove closer to 1 pm this (Monday) afternoon.

“He said to me that good sense had prevailed and we have taken the decision – I do not know who is the ‘we’ – that the morgue to house covid19-deceased individuals will no longer be in the community of Beaucarro.”

“He (Belgrove) said they listened to the concerns of the community. I told him that in the future, do not cause this pain, trauma, anxiety and fear to any community in the other 40 constituencies.”

Residents of Beaucarro Road, Freeport in Couva stands outside the proposed site of a storage facility for the bodies of covid19 victims. Photo by Ayanna Kinsale

During Indarsingh’s meeting with residents on December 23, Newsday was told residents were not consulted about the facility, but  learned about it on the news.

Its proximity to houses and uncertainty over how the abandoned warehouse would have been transformed into a proper facility to store bodies by January were among the many concerns that residents had.

“The issue of consultation and treating people with respect, and dignity, is the issue here.

“The community of Beaucarro must be congratulated for the victory of the pulling-back of this facility.

Indarsingh claimed he consulted with medical professionals who told him there is a free space in the grounds of the Couva Medical and Multi-Training Facility where such a facility could be built.

But Indarsingh is also calling on the Health Ministry to reverse its guidelines which prohibit open-air pyre cremations for covid19 fatalities.

Sales picking up in Princes Town before Xmas

If this is done, Indarsingh said it will make the need for any facility redundant.

“If this is allowed to take place, the backlog that we are hearing about will be eliminated and reduced considerably.”

On Monday, attorney Kiel Taklalsingh of Sovereign Chambers released a statement on the claims of the facility being scrapped, on behalf of the residents who sought his advice to take legal action against the Health Ministry.

Taklalsingh sent a pre-action protocol letter to Parasram on Saturday asking for details of the planned facility and highlighting what he said were potential Town and Country Planning Act violations.

The release said, “It was heartening to the community to see the solidarity of our nation in rejecting the manner in which this mass storage site was being imposed on our community.

“We also wish to thank our MP Rudranath Indarsingh, for his swift action and our attorneys at law of Sovereign Chambers for their legal advice, drafting and guidance.

“Finally, we are heartened by the good and mature decision adopted by the Funeral Association and its president.”

The planned storage facility was a partnership between different funeral homes and was being led by the Health Ministry, the chief public health inspector and the director of veterinary public health.

It was intended to relieve the pressure on the regional health authorities and funeral homes across the country.

Since the start of the pandemic in March 2020, TT has recorded 2,793 deaths, with 635 being recorded between December 1 and Monday.