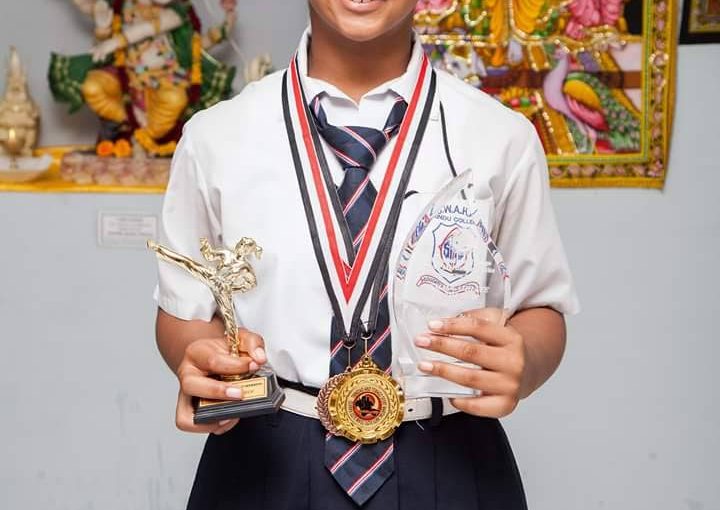 “I want to represent my country at the Olympics,” she told Newsday Kids.

Chelsea has been practising for that dream since she was two-years-old. It is in her blood after all, having been born into a karate family. Her parents Lena and Barry Winter are both black belts and coaches at her dojo, Team Elite Karate Club, Sangre Grande. But just because her parents are black belts does not mean her skills come naturally. Chelsea has had to work hard to reach where she has. She trains twice a day, morning and evening, with her ten-year-old brother Christian, who is also a national karate champion.

She competes both as part of her club as well as part of the TT National Karate Team (TeamTTO).

Chelsea’s illustrious career in the sport is only the tip of the iceberg.

She is also an accomplished dancer, having won Best Dancer award at the RG’s musical productions and services More Than Just Talent competition this year with the Rangila Dance Company. And as much as she may be passionate about her sport, her parents ensure that she is just as focused in school.

She attends Swaha Hindu College in Sangre Grande and is about to enter Form 2. Her grades are just as impressive as her medals, having received six As in last term’s exams. Her favourite subjects are science and mathematics.

“Karate helps me practice my discipline,” Chelsea said. She is able to micromanage well, even with juggling all of her other extracurricular activities. She wants to be a teacher when she grows up.

She said what she enjoys most about karate is the opportunity to travel and compete with and against people from all over the world.

“I love travelling to compete,” she told Newsday Kids, adding that as “amazing” as the experience is, like everyone else, she sometimes has her doubts and gets a bit nervous before competition, wondering if she will do well.

Keep up the good fight, Chelsea!

The post ‘I dream of Olympics’ appeared first on Trinidad and Tobago Newsday.

Sun Aug 26 , 2018
Valdeen Shears It wasn’t only about sensitizing children about their spirituality and the teachings of the Bible, but about providing a fun learning environment for them outside of home and the classroom. This was one of the objectives shared by a facilitator on Monday, during the graduation for more than […]