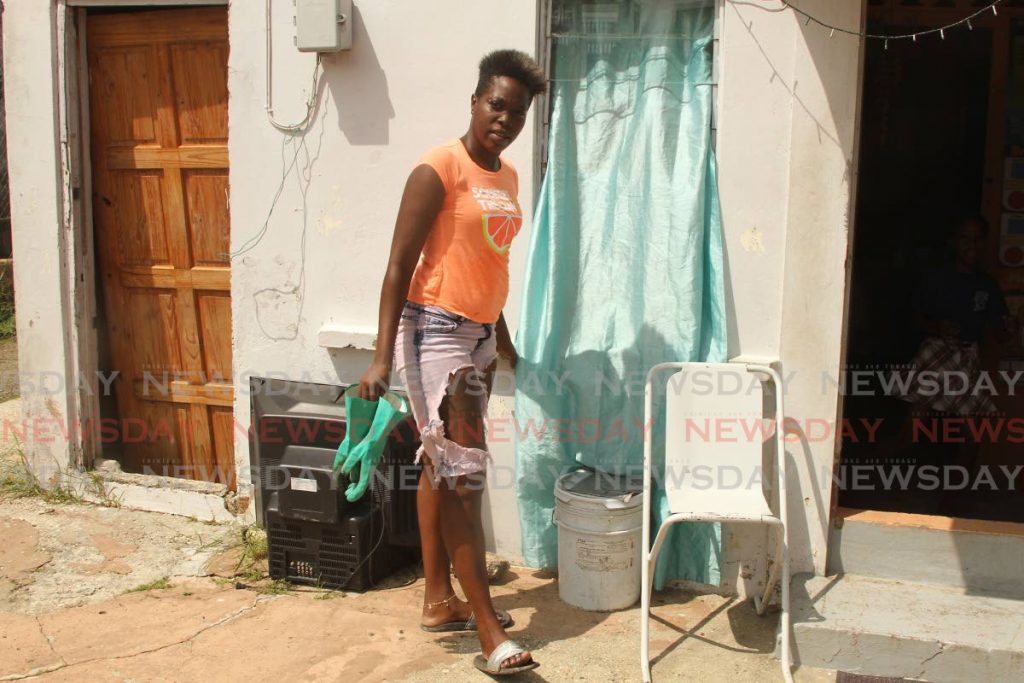 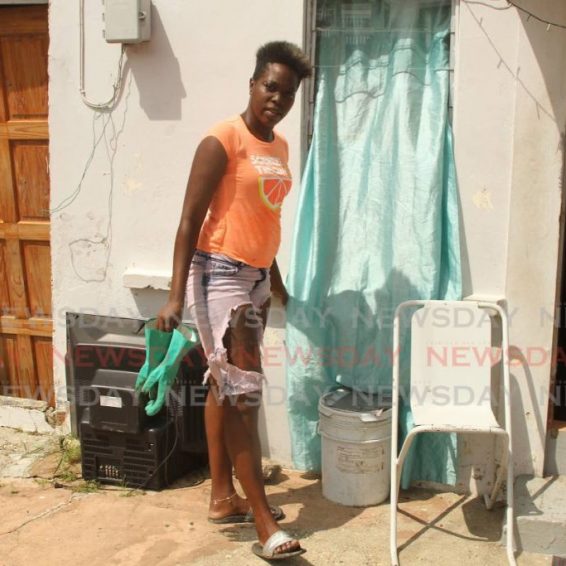 On Thursday, Newsday visited Inverene Road in Cocoyea near the site of a reported oil leak. A maintenance crew attached to Heritage Petroleum Company Ltd was at the location. – Marvin Hamilton

The family is just one of several families affected by recent Heritage oil spills in Cocoyea and Santa Flora.

When Newsday visited Stoute’s family on Thursday, they were gathered in their gallery to take a breath of fresh air, which is something they weren’t able to do two days before.

Stoute recalled, “It was Tuesday evening when someone down the road saw the spill and told us.

“My children were feeling sick and my wife was saying it could be that (the spill), because the scent was strong yesterday (Wednesday) morning.”

By Wednesday afternoon, Stoute said the strong scent was gone when a Heritage team started to do repair work on the pipeline.

The spill happened next to Claxton’s house, which is three houses away from Stoute’s.

She told Newsday, “It was really discomforting, I had to wake my husband up around 2am and tell him I was feeling sick. I had to come outside a bit and try to get some air.”

While Stoute isn’t considering seeking compensation for the incident, she hopes it doesn’t happen again.

Next door, Tisha Lawrence’s daughter began having sinus issues due to the spill’s strong scent.

Lawrence recalled, “She was uncomfortable during class time. Normally when her sinus raise, I can bring her outside to get some fresh air, but I couldn’t do that yesterday (Wednesday).

“A guy from Heritage came and took some information, but they haven’t contacted me since.”

Tisha Lawrence spoke with Newsday from her Inverene Road, Cocoyea home, on Thursday. The mother of five lives near Heritage Petroleum Company Ltd pipelines. She said works done by the company led to horrible flooding which destroyed household items and her kids’ school devices. – Marvin Hamilton

During Newsday’s visit on Thursday, Heritage workers were doing repairs on the pipeline.

Residents in Santa Flora faced a similar situation on Wednesday when another Heritage pipeline ruptured at the corner of Wells Road and Agapito Trace on Tuesday.

Randy Ramjit lives nearby and noticed the spill around 10.30am on Tuesday.

Even though he quickly called Heritage and a disaster response team was sent to assess the situation a few minutes later, he said repairs didn’t start until Wednesday.

Claiming his family was left to inhale the fumes until then, Ramjit said his wife had to be taken to the Siparia Health Centre for treatment after she started to feel unwell.

In an interview on Wednesday, Ramjit told Newsday, “About 3 o’clock this morning (Wednesday) my wife wake up and started complaining about a headache, chest pains and she was in severe discomfort.

“I had to rush her to the Siparia Health Facility, where she received medical treatment.”

Ramjit’s wife was given medication and discharged around 7am on Wednesday.

On Thursday morning, Ramjit and several disgruntled residents in the area staged a protest.

In an interview on Thursday, Ramjit told Newsday, “This morning (Thursday) some of the residents decided to come out and voice how they were affected by the incident.

“What started the protest is that some of the residents had no water, because some of the WASA lines in the area got damaged due to the heavy equipment that is being used to do repairs on the pipeline.”

With repairs to the pipeline ongoing, Ramjit said Heritage officials met with residents on Thursday afternoon to hear their concerns, but nothing further was discussed.

In a press release on Wednesday, Heritage said clean-up and containment work was being done on the two spills.

The release said, “In both instances, which involved minor seepage from nearby facilities, Heritage activated its Emergency/Oil Spill Response Protocols, which includes immediately suspending pumping operations, plugging and clamping associated pipelines, where applicable.

“Heritage personnel are in contact with impacted persons in the area of both incidents and are working diligently to ensure their safety and well-being and minimise impacts to them.

Apart from doing air-quality tests, Heritage said the Ministry of Energy and Energy Industries and all regulatory bodies were notified of both spills.