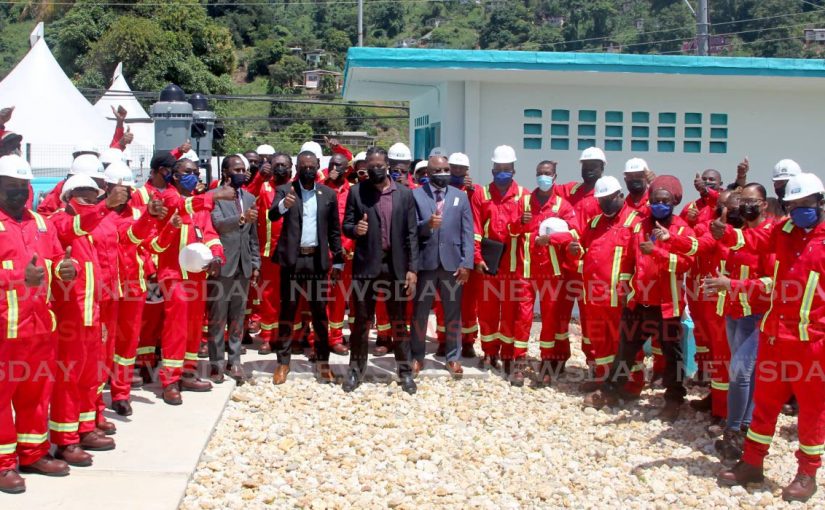 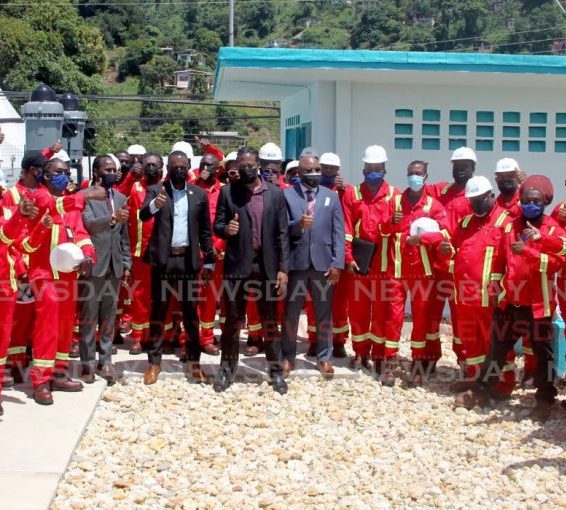 FILE PHOTO: Public Utilities Minister Marcus Gonzales, centre, with other government officials and WASA workers at the recommissioning of the Pitch Road Booster Station in Morvant on October 6. – ROGER JACOB

PUBLIC Utilities Minister Marvin Gonzales said a transformation plan had been completed for the Water and Sewerage Authority (WASA) and its workers have nothing to fear from it. Gonzales also apologised to the children of Trinidad and Tobago for comments made by Opposition Senator Anil Roberts and said citizens deserve better from people who promote themselves as exemplars.

He made those statements during hs contribution to the budget debate in the Senate on Tuesday. Reiterating that he laid a report of a Cabinet sub-committee on the transformation of WASA in the House of Representatives earlier this year, Gonzales said Government was committed to that objective so that “every citizen of this country can enjoy a sustainable water supply 24/7.”

He continued, “I want to take the opportunity to inform every single employee of WASA…as well as all of the governing trade union bodies representing employees of WASA…that the board of commissioners (of WASA)…the Ministry of Public Utilities and the Government of TT are all cognisant that we have to abide by the collective bargaining arrangements..that are being governed by a lot of the employees within WASA.”

As Government seeks to transform WASA, Gonzales said, “The Government will comply..and WASA will comply with its responsibilities under the respective collective bargaining agreements of the workers and the unions representing WASA workers.”

He added, “There is absolutely nothing to be concerned about.”

On water and electricity rates, Gonzales reiterated the independence of the Regulated Industries Commission (RIC) in the determination of those rates. He reminded senators that last December, the RIC indicated it began its review of those rates.

“We await the outcome of that.”

Gonzales said WASA and the TT Electricity Commission (TTEC) have completed their business plans to be submitted to the RIC.

“At the end of the day..at the end of its process…it (RIC) will make a recomendation with respect to rate reviews for WASA and for TTEC to the Government and the Government will determine what subsidy arrangement will be put in place to protect the poor, vulnerable and disadvantaged groups in our society as we move forward.”

He added both WASA and TTEC badly need a rate review to ensure their financial sustainability.

“Their rates must be in alignment with current market trends, so that they can raise their revenue to take of care of their circumstances, so they can provide the people of TT with modern utility services.

Gonzales also spoke about plans by TTEC and the National Carnival Commission to partner on the creation of a charging station for electic cars at the Queens Park Savannah and a wind power feasibility study for Tobago.

Referring to an earlier contribution from Roberts, Gonzales said, “It is difficult to respond to drunken rambling. Let me apologise to the children of TT. Dr Eric Williams did not live and sacrifice his life for what we have just seen in this chamber. Our children..our people..and our citizens deserve better.”

Gonzales said Roberts could not criticise the PNM on sport when the Lifesport scandal happened under his watch as sports minister in the former UNC-led People’s Partnership coalition government. After being cautioned by Senate President Christine Kangaloo about how senators are mentioned in a debate, Gonzales said all Lifesport did was “leave a trail of death, destruction and mayhem.”

Regardless of what people may think about the PNM, Gonzales said, “We will not put forward people this country will not be proud of.”