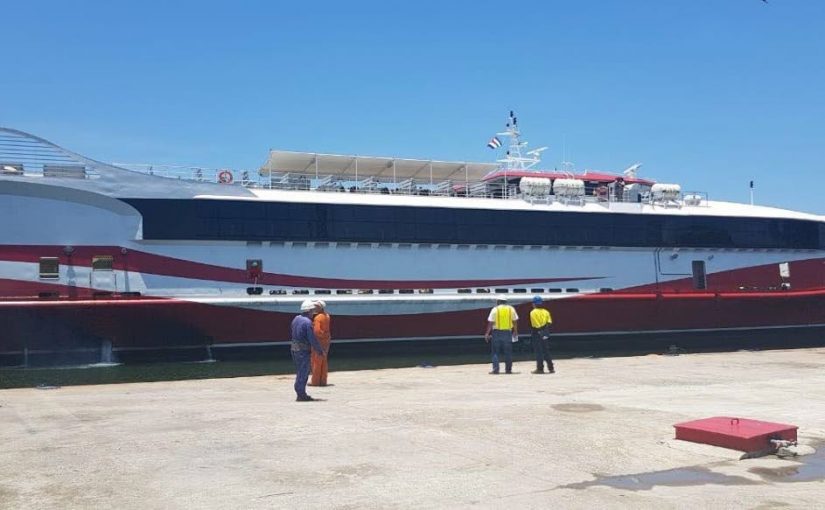 THE MV Galleons Passage is scheduled to make its long expected arrival in TT tomorrow around noon. This was disclosed today by Works and Transport Minister Rohan Sinanan. He told Newsday his latest information is that the vessel is on schedule to arrive in TT tomorrow. However former minister Devant Maharaj alleged the Galleons Passage was drifting because it had run out of gas. Government officials said Maharaj’s claims are false. They said the vessel is travelling at reduced speed because of bad weather.

The Galleons Passage left Cuba last Tuesday and is travelling at a speed of 12 knots. At the sod turning ceremony for the construction of a water taxi walkover at the Port of Spain International Waterfront Centre, National Infrastructure Development Company (Nidco) chairman Herbert George said the Galleons Passage was sailing non stop to TT.

Satellite tracking on Saturday indicated that by today, the vessel will be approaching the Venezuelan coastline on the final leg of its journey to TT. Sinanan said he hoped the media could tour the vessel when it arrives, once Nidco gives the green light. He said this would help the public to see that it is “a brand new vessel.” Once the Galleons Passage arrives, Sinanan said there are some logistics to work out with the ministry’s maritime division, before it can operate on the seabridge.

The Opposition was scheduled to hold a news conference today about the Galleons Passage today at 2 pm.

Woman tells police: "I was raped by man posing as cop"

Sun Jul 15 , 2018
A 23-year-old woman went to the Chaguanas Police Station on last night, and reported that she was raped by a man claiming to be a police officer. According to reports, the 23-year-old victim told police at around 9.00 last night, she was standing by the Charlieville taxi stand awaiting transportation, […]