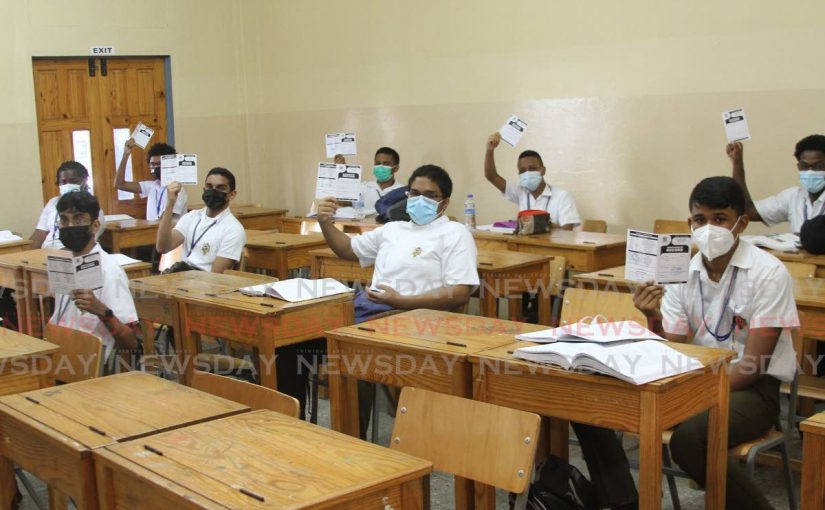 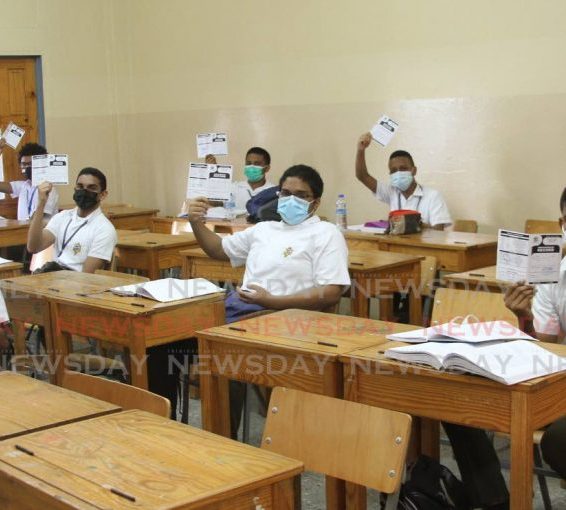 While lower form students have expressed excitement at the prospect of returning to the physical classroom, their parents and teachers are a bit more apprehensive.

On Friday, during her contribution to the budget debate, Education Minister Dr Nyan Gadsby-Dolly said students of forms one to three who are vaccinated will be allowed to return to physical school in the next two weeks if all goes well.

Speaking to Newsday anonymously, a few students and their parents shared their view on the physical reopening.

“I want to go back to school,” said one eager form one student. “I don’t like online school. It’s harder to learn. Sometimes teachers will come to class and don’t explain the work properly.”

He said above all he is excited to meet the friends he has made since he started at his new secondary school.

“We all talk on a school group chat, but we’ve never met.”

The vaccinated student said he is not nervous at all about the return.

His mother said, “He is just waiting; ready and waiting. He is ecstatic for it to happen. He has already planned what type of mischief he is going to get into. He is so fed up with online school. Totally fed up. I, on the other hand, don’t know how I feel about it. But it will be good to get him out of the house.”

Another parent told Newsday her son, also in form one, is excited to meet his new friends. “He gets to interact instead of chatting on the group chat. They can chat in real. He gets to see who his teachers are, and he could get box lunch if he wants so he doesn’t have to eat mommy’s food all the time. His words, not mine,” she joked.

She said she, however, was very apprehensive.

“I’m getting that we are going to be apprehensive for a long time because this doesn’t seem to be going away anytime soon. We can’t live in a bubble for the rest of our lives. Just take the necessary precautions and play it by ear.

“Of course, I would be very grateful for a little ease from this new teaching job that I have been thrust into.”

She said her son’s father is also apprehensive about the possible return. He believes the first week of the upper forms’ return to school has been disorganised and the older students have not yet settled.

One teacher, who also requested anonymity, said while she could see the benefits of going back out to school, there were many things to consider.

The standard five teacher said she had past students who will be in forms one and two now, and her children are in upper forms in secondary schools.

Primary school is a little different,” she said. “We have one class to teach. We taught the first set of students to sit Secondary Entrance Examinations (SEA) during the pandemic and were allowed to come out for two weeks before the exam, but that was just one class.

“Secondary school teachers have more than one class to juggle, so it’s easier if all the students are out. Although, I don’t know how they are going to manage social distancing.”

She said schools may have to stagger the schedule to allow small groups on the compound at any given time. “How will that affect timetabling,” she asked. “I see it being extremely complicated. Then teachers must figure out who can come to school, and who is vaccinated.

“I don’t know. It’s a complex issue that will need some fleshing out. I think the government should give them time to deal with upper school right now because that is complicated enough.”

She said schools should be allowed to see how they can make the system work with the upper school first before bringing in the lower school.

“When they have the data to work with, they will know how to go forward with the entire school. It will be a logistical nightmare for principals. It’s a little unfair.”

She said the couple schools that she knew of only held orientations last week to help students climatise to the physical environment.

“You can’t even see how it functions yet. They only did orientation. To rush everyone in is premature.

“It’s all well and good to command from a high post, but you don’t actually have to do it. You have to give people who actually implement the change to work it out. Every school will be different.”

Another teacher said children have been ready to go out for a while. “It’s the parents who are the issue,” she said. “With all the uncertainty and safety issues surrounding this pandemic, especially with the delta variant, it’s creating a lot of anxiety for parents, but the kids have been begging to go out.”

She said many students have not been coping well in the online environment.

“Online learning has serious limitations as it relates to the type of learner you are. Most students are not disciplined enough to do work on their own.”

She said it’s possible for teachers to balance the influx of students, however, it will take patience from the students at home. “It’s doable, but it will take a lot of discipline from those who have to do work asynchronously. They will have to become independent learners and the parents will have much more work to do. They will have to fully support their children.”

She said, despite the challenges, she still believes it is the right move, but she would rather the government wait for next term to bring in the lower forms.

“Wait for the rest of the term to span out to see what transpires with upper school and then we will see. Let us try to get this right because for some schools, it would be more difficult than others.”