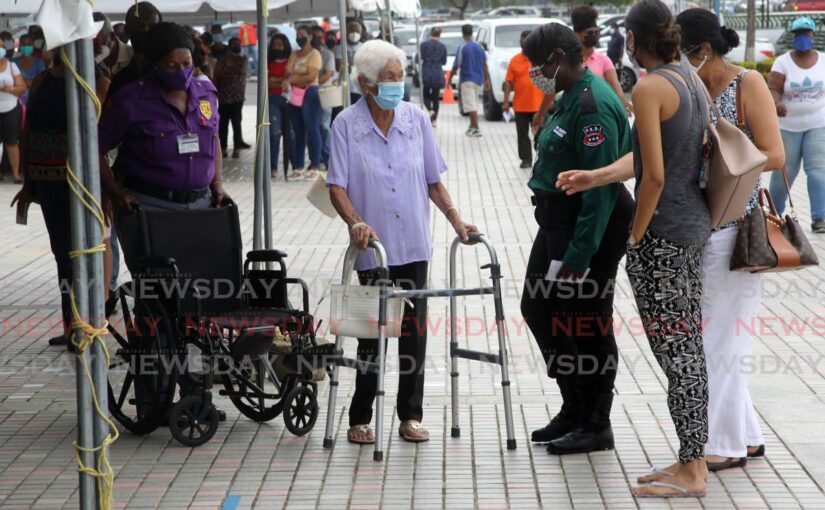 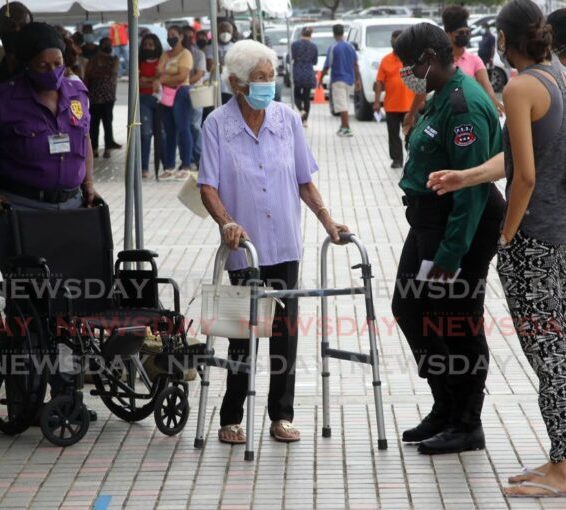 News
File photo: A woman is given a wheelchair while she waits to be registered to have her vaccine booster at the SAPA mass vaccination site in San Fernando. Photo by Lincoln Holder

A group of sailors touring the Caribbean have described Trinidad and Tobago’s vaccination process as excellent after receiving their third dose at the Queen’s Park Savannah, Paddock, on Wednesday morning. One Polish man in the group said he had a better experience in Trinidad than in Canada.When Newsday visited,a group of approximately ten people was at the entrance holding vaccination cards. They explained they are sailors from different countries trying to sail to as many Caribbean islands as possible, and arrived in TT almost three months ago.

Andrew Morgan, who is from Western Australia, said he decided to get a third dose of the covid19 vaccine when he heard Minister of Health Terrence Deyalsingh encourage the public to take another dose to reduce their chances of contracting the virus.

He told Newsday he was impressed by the smooth process, especially as a non-national.

“It wasn’t bogged down in bureaucracy. Here it’s just getting the injections and getting everybody vaccinated.

“It’s five months since we had our last one, and the advice is that we need to get the booster.

“It was excellent. That’s the best one that we’ve done. It was a better experience than what I had in Canada. It was seamless, excellent and very professional.

Of their adventure, he said, “We’ve sailed all around the Caribbean in the last two years, where we’ve done ten countries since covid19. It’s been a challenge but we are doing it.

“We are all from the same boat, but we have various different stories, Everybody’s doing different things but we’re all fundamentally similar.

Another sailor, Andre Lasocke, told Newsday he was also pleased with the professionalism of the officials at the Paddock vaccination site.

“There was no extra paper, no informatics system. It’s a different situation in Poland, I’m from there. And there you got the main computer system and you have to be putting things into the system. From the beginning of the pandemic to now the system is the same.”

He said he had two doses in France, “But I cannot transfer my papers into the Polish system. So it’s like crazy stuff, because there’s a lot of paperwork to do that. But it’s perfect here.

“It’s my second time here, and with this service, I’m now addicted. We are actually here still because we are repainting a boat, but I think I will go looking for a job at a university in Trinidad.”