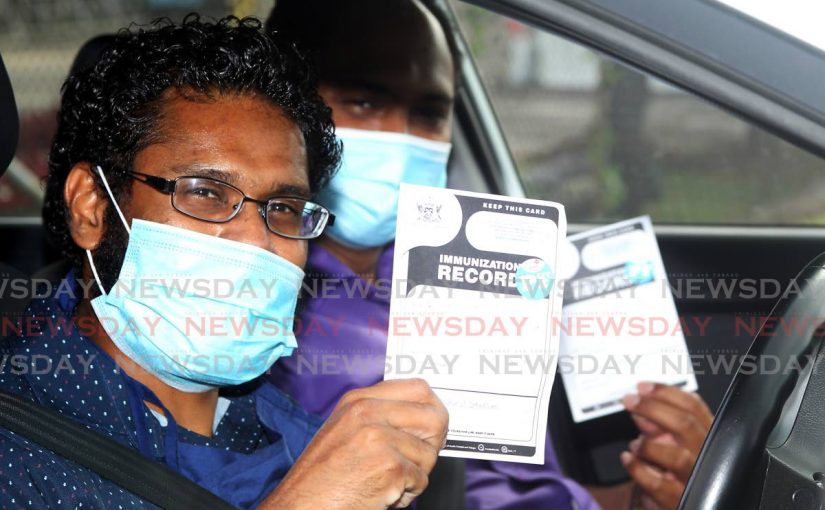 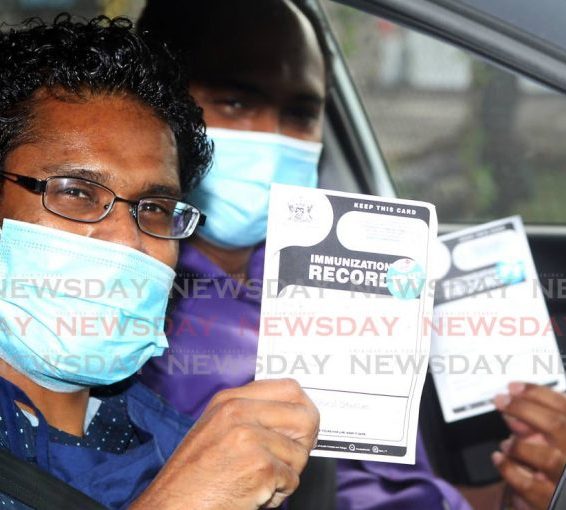 JABS FOR DOCS: With the delta variant taking root, medical doctors Ian Daniel, left, and David King were taking no chance with their health as they got their second covid19 vaccine shot on Tuesday at the Hasely Crawford Stadium. PHOTO BY ROGER JACOB –

JUST a few of the small number of people that turned out to covid19 vaccine sites at the Paddock, Queen’s Park Savannah, and the Hasely Crawford Stadium in Port of Spain on Tuesday, were there for first doses. The majority were returning for their second jabs.

At the Paddock, Newsday spoke to Oliver Boodhu who said, as a justice of the peace, he had returned for his second shot of the Sinopharm vaccine because it was important for him to be fully vaccinated.

“The police (are) always calling me out. I’m always in the station, so I had to take it.”

He admitted he was the last to be vaccinated in his household.

Nicholas Johnson said he brought his friends who were still vaccine-hesitant to get their second shots.

“I was just encouraging them to come take their second dose so that they will be fully vaccinated.”

He said he believed people were still sceptical of the vaccines because of social media.

“I mean, there were things that people were experiencing, but if it is still preventing you from dying, then try it.”

Asked his thoughts on Health Minister Terrence Deyalsingh’s warning on Saturday that ICU beds were at 90 per cent capacity, Johnson said the vaccine was the only way for people to be safe.

“If you don’t take the vaccine, you can end up in the hospital. If you take it, you have a chance.”

A woman who requested anonymity spoke to Newsday after receiving the Johnson & Johnson one-shot vaccine. She said she took the jab because: “I have to go to the cinema.”

The woman admitted that she was against the vaccine but felt forced to get it in order to enter the safe zones.

“For me, I think covid19 is something bigger than we will understand right now. But I am just playing along because, at the end of the day, they are going to make it mandatory.

“I just want to live my life, so I went along with it.”

Newsday spoke to Dr David King and Dr Ian Daniel, who were leaving the vaccine site at the Hasely Crawford Stadium, having received their second dose of the Pfizer vaccine. They both stressed the importance of being vaccinated.

Daniel said he took the vaccine in order to protect someone else.

“I have an unwell relative at home so I have to keep them safe. That was my main inspiration.”

King said he too had been vaccinated to protect his elderly family members.

Newsday also spoke to a 26-year-old Venezuelan man who had received his second dose of the Sinopharm vaccine.

He said in order to remain employed, he had no choice.

“I work at a gyro place and they asked me to get vaccinated to continue working.”