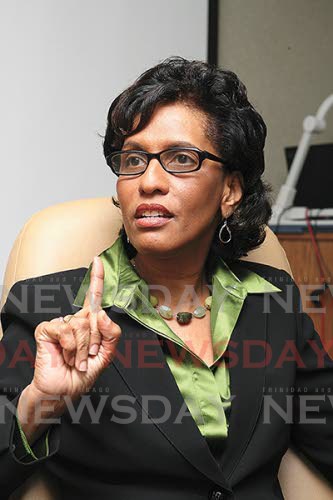 Former finance minister Karen Nunez-Tesheira is calling on the government to create a new fund – like the Green Fund and the Heritage and Stabilisation Fund – to manage the revenue generated from the property tax, instead of putting it into the Consolidated Fund.

If this is done, Nunez-Tesheira said, the government can ensure greater accountability when the tax revenue is spent.

She made the call while speaking about the tax during an online webinar hosted by the Chaguanas Chamber of Industry and Commerce (CCIC) on Thursday.

She explained, “I do think the idea of it (tax revenue) going into a big heap of the Consolidated Fund, where it’ll get mixed with everything else and then the minister (of finance) determines where it goes, leads to a situation where there is really no accountability.

“If you are saying to me that my property tax is for a specific purpose…then it should be transparent, accountable and I should be able to see how that money is being spent.

“We have a Green Levy Fund, so create a fund for the property tax, because if you create that fund, I’m going to see where my money is going.”

And even though Finance Minister Colm Imbert has said the revenue generated from property tax will be invested in local government projects, Nunez-Tesheira said it’s a wait-and-see situation.

“Don’t hold your breath about what they (say) they are going to do with it which is putting it into local government,” she said.

Economist Dr Vaalmikki Arjoon also thinks the government should create a separate fund to save the tax revenue if it wants to ensure the revenue is spent on local-government projects as promised.

Arjoon said, “We understand that the proceeds from the property tax are likely to be placed into the Consolidated Fund, which is the main account that the State places their revenues in and spends from.

“Now if this really happens, then there’s a risk – a serious risk – that the (tax) funds, or at least some, could be spent on other budgetary obligations (and not its intended purpose).

“To avoid this, the State needs to set up a separate fund that is strictly for the property-tax proceeds with legislation that is carefully drafted so these funds can’t be used for anything other than local-government purposes.”

Arjoon also advised people that it may be wise to do their property valuations now as opposed to next year, when the country is expected to see economic growth.

To date, the Ministry of Finance has received 165,000 completed valuation forms for residential properties, out of the 200,000 needed to reach the 50 per cent threshold required by law to trigger collection under the Property Tax Act.

Imbert disclosed the figures on Wednesday while answering a question in the House of Representatives posed by opposition Whip David Lee.

The current deadline for submission of the property valuation form is November 30.