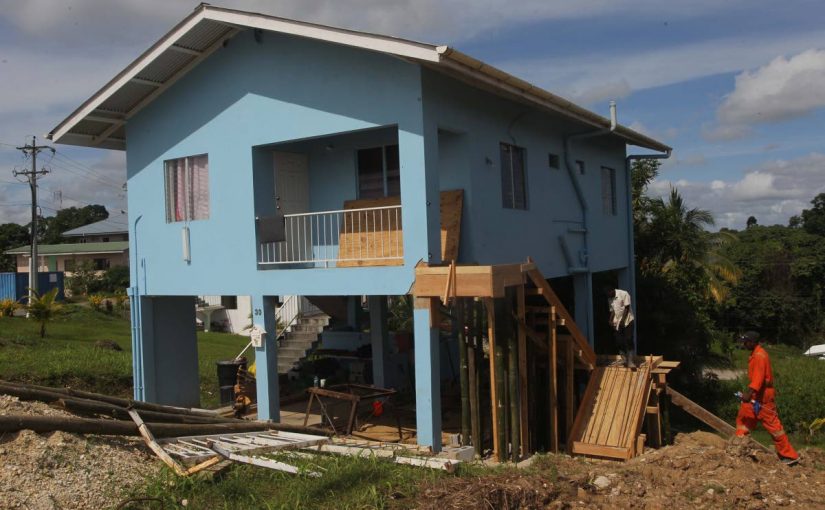 CLAIMING engineers have stated 80 per cent of TT’s building stock is at risk, former chairman of the disbanded National Building Codes Committee Shyankaran Lalla is hoping that the 6.9 earthquake on August 21 which shook the surface on which TT buildings stand, would underscore the urgency of having an effective building code.

Lalla said he was really concerned about buildings in Port of Spain that sit on reclaimed land. He said, in the past, TT did not have the technology that existed today to stabilise lands which were reclaimed. He said if and when a “big earthquake” hit there would be massive damage to lives and property.

He said retrofitting could be done to some of the commercial and government buildings to be earthquake compliant and called on Government to make it compulsory for this to be done in the building codes legislation. He said there were no laws at present to compel owners to retrofit buildings that sustained damage during last Tuesday’s earthquake.

Local Government Minister Kazim Hosein agrees that the time for a building code is long overdue. He said he had experienced, first-hand, irregularities with people going contrary to approved plans.

“I have seen plans approved for two-storey buildings when in reality the structures are really three storeys high. A building code is necessary, but there must be compliance and enforcement,” Hosein said.

The Planning and Development Ministry said the Town and Country Planning Division (TCPD) is currently reforming its processes and systems to modernise the way they do business and climate change as well as natural disasters are at the forefront of this process.

Lalla said TCPD was strapped for resources and, sometimes, the process of getting completion certificates was not so rigorous.

“We are a ten-day wonder in this county. We remember things for ten days then forget half of what we say we will do and not going to do. Last Tuesday’s earthquake where we saw a lot of buildings falling down and cracking, is evidence our buildings are poorly constructed. Had we got a seven-magnitude earthquake with the epicentre located in TT, there would have had serious consequences for the people of TT. What we really got was a fall out of what we call the seismic wave coming out of that ‘quake.”

“Building codes saves lives,” Lalla insisted. He gave a comparative example of two large earthquakes in 2010: one in Haiti and the other in Chile. While Haiti’s earthquake, a magnitude 7.0 temblor, caused extensive damage and loss of life, Chile’s magnitude 8.8 earthquake was less destructive and less deadly, because, Lalla said, the Chileans have learnt their lessons well from their earthquake experience and they have a strong building code.

“If there is one thing the Government can do for the protection of the health, safety and welfare of the of the people of TT before the next disaster strikes, is to ensure we have a building code,” Lalla said.

He said there was no need to reinvent the wheel because his 19-member committee appointed under the People’s Partnership administration made recommendations and an agreement was signed between the former government and the International Codes Council (ICC) to adopt their code. He said, by convention, a lot of local engineers had been using the ICC codes which were revised every three years based on changes in the environment and global disasters.

“Government needs to hold talks with the ICC and tell them we would like to adopt their code. There is a document sitting in the Housing Development Corporation which was signed by the previous housing minister Dr Roodal Moonilal.”

Lalla said all that stood in the way of TT signing on to the ICC to use their proprietary material was a sum of US$27,000 which was approved by the then cabinet to seal the deal, but which was never paid. Calls and text messages sent to Moonilal to glean the reason for not paying the fee were not answered.

“All we had to pay was the fee to the ICC. The ICC had written to the government indicating that they were willing to collaborate and provide assistance, once the code was effected.” He said a training component about hurricanes, floods, fire codes, wind codes, seismic codes etc, was also included in the arrangement.

Lalla said Minister of Planning and Development Camille Robinson-Regis can call for the documents and move forward to access the ICC.

In a statement from her ministry, Robinson Regis said, “Using modern technology to enhance an evidence-based approach to decision making, as well as integrating the importance of current environmental challenges such as climate change and coastal zone management, the TCPD is building an interconnected nexus of information that not only advises the decisions we make, but also provides data to stakeholders which will inform their building methods, materials, sites and structures.”

She said it was possible that implementing those measures would not only make it easier to adopt or adapt the building codes of the ICC, which the TCPD was giving active attention, “but we will be able to build a body of data that can also inform the development of a regional code system.”

Lalla said TT became the first country in the Caribbean to be afforded the opportunity by the ICC to host a chapter in TT, which he chaired. He said the ICC also indicated they would work with them to provide training to building inspectors, contractors, planning officers and others who were interested in having knowledge of the buildings codes.

He said he would like Government to make it compulsory for building inspectors and town planners to access the training, so they could do the right thing.

He also suggested that the University of the West Indies, St Augustine hold discussion with the ICC to include some of these training programmes on their curriculum for architects, engineers, draughting technicians as was done at universities in developed countries.

“Because some engineers when they come outside here are clueless about the codes. Draughting technicians draw plans for people but they don’t have a clue about building codes.

Moving forward, Lalla said he was offering his services to Government in the interest of the safety of the people.

“I would like to call on Prime Minister Dr Keith Rowley to have discussion with the ICC so we can move forward in adapting the provisions of the international building code. Following that, the Government can prepare the necessary legislation so we can have the building code as a legally enforceable code in TT.

“We have to start building structures to meet the provision of the ICC. We don’t have to wait for a disaster to strike to do things.”

The post Earthquake, a wake-up call appeared first on Trinidad and Tobago Newsday.