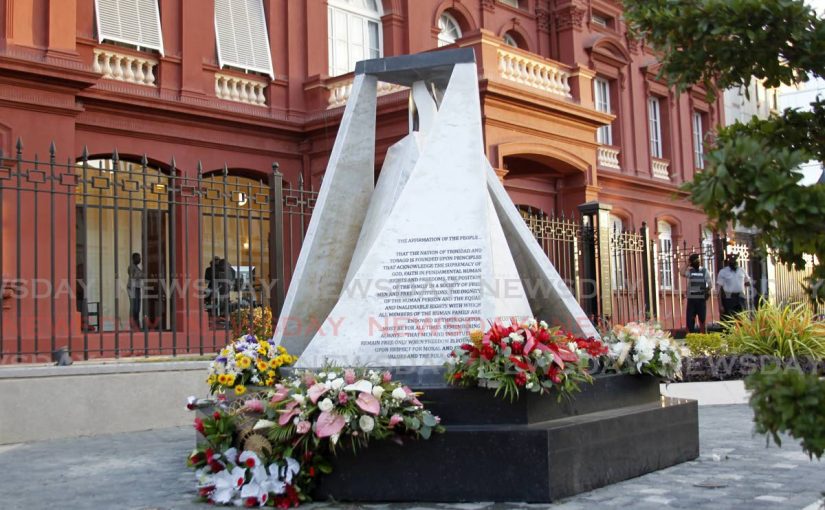 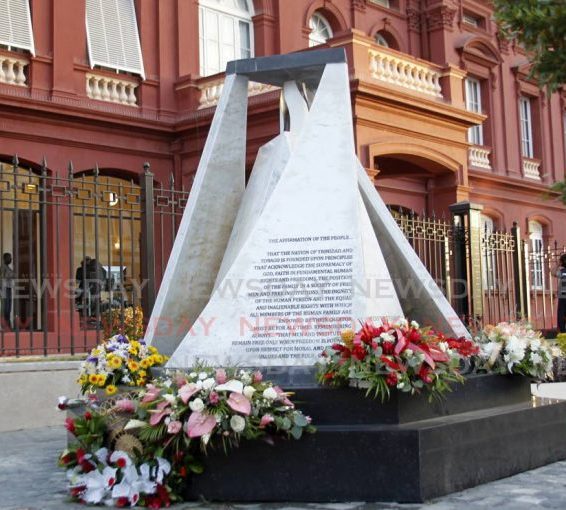 The cenotaph at the Red House was erected to honor of the victims of the attempted coup of 1990. – ROGER JACOB

Former government minister Winston Dookeran believes the commission of enquiry into the 1990 attempted coup did not address two issues – the “sensitive matters” in the failings of the national security system and the inadequacies of the constitutional arrangements for handling such an event.

“In my view, those were two very fundamental issues for which we could have learnt to protect ourselves against not only that (attempted insurrection) but future occurrences,” he said on Saturday in the aftermath of the death of Jamaat al Muslimeen leader Yasin Abu Bakr.

Bakr, 80, collapsed at his home on Long Circular Road, St James, on Thursday night and was later pronounced dead at the St James Health Facility. His funeral took place on Friday at the Jamaat’s mosque on Mucurapo Road, St James.

On July 27, 1990, Muslimeen insurgents, led by Bakr, stormed the Red House in Port of Spain and tried to overthrow the ANR Robinson-led National Alliance for Reconstruction Government. Several people, including Diego Martin MP Leo Des Vignes, died during the attack.

The commission, chaired by Sir David Simmons, completed its work on September 23, 2013 and the report was submitted to President Anthony Carmona in March 2014.

Dookeran, who was Minister of Planning in the NAR administration, said the commission did make some recommendations on the treatment of victims, but the then government (UNC) and successive administrations did not address them with any alacrity.

“Much of that required government decisions and I don’t get the impression that it was taken seriously by the then government or subsequent governments.”

Dookeran recalled after Robinson was shot in the Parliament chamber, he was hastily-appointed acting prime minister and had not only to appease the insurrectionists but restore some semblance of calm in the country. He subsequently brokered an agreement with the Muslimeen through an amnesty.

Reflecting on the casualties of the crisis and the general uncertainty of that period, Dookeran lamented the removal of the eternal flame from the eastern side of the Red House. He said the flame was an enduring symbol of the resilience of the country’s citizens.

“I think the historical monument…was supposed to be a memory of how the people in our country responded to this crisis in democracy and…was supposed to be reflected in the eternal light, not only to acknowledge the ultimate sacrifice that a number of our citizens had to make by losing their lives, but also to inspire the next generation that this was a victory of the people in defence of our democracy.”

He said the eternal flame was eventually removed and replaced by another monument, which is now really a recognition of the past, when the flame was meant to be an inspiration for the future.

“I thought that was a fundamental flaw, in terms of learning psychologically from that episode that took place and affected, in many different ways, the country’s capacity to adhere to law an order.”

Dookeran believes the commission did not do a proper sociological analysis of the incident.

“The commission did not go into the sociological analysis and the psychological component of that analysis that allowed the fostering of a permissive society in the sense of people not upholding laws and not maintaining the principles of the sanctity of life. In the final analysis, it is the values of the people for the sanctity of life that is the best protector against any violent attack on that life.”

He also believes the voluminous report has since been “placed on the shelves.”

In any case, he said, “It was late in coming, but did not handle the issues. The idea of a commission of enquiry is to have an accurate, official record of the events at the time because it is part of our history. It may have done some of that. I am not denying that part.

“But it also was meant to rectify some of the shortcomings in our system – security as well as the constitutional arrangements.”

Former prime minister Basdeo Panday told Sunday Newsday the commission of enquiry did not succeed in easing the anxieties of citizens.

“I do not think the commission of enquiry had any impact on improving conditions in relation to dealing with the frustrations that develop with such frequency in this country,” he said.

Panday also believes it made no significant recommendations for preventing such occurrences  or in relation to the political system that gave rise to the attempted coup.

“Its purpose was to lay blame.”

Political analyst Dr Bishnu Ragoonath said the enquiry did try to answer some questions, but did not address all of the concerns.

“We still need to get some answers about some of things that would have happened in 1990. Abu Bakr did not attend the enquiry, so we did not get his account. So many issues still remain unanswered.”

Ragoonath also believes the enquiry did not bring closure for victims and their families.

“While it did help to explain some things, in some instances it did not bring the closure that was required. So from that perspective it fell short (of) what it should have accomplished.”

Nonetheless, Ragoonath said the enquiry was a critical component in assessing an incident which changed the course of the country’s history.

“It was a necessary enquiry for the people of that generation who experienced the attempted coup. And for the youths of today, I think it gave them some degree of a perspective of what transpired in 1990.”

“There was an amnesty, and I think it was on that basis he got off. So while moral justice may not have been served, I think he got off on a point of law, and that left a lot of people dissatisfied, because the fact is that he did commit the act. There was clear evidence of that.

“So I think it left a large sector of the population unhappy and dissatisfied that someone who committed a grave offence could have actually been walking the streets free.”