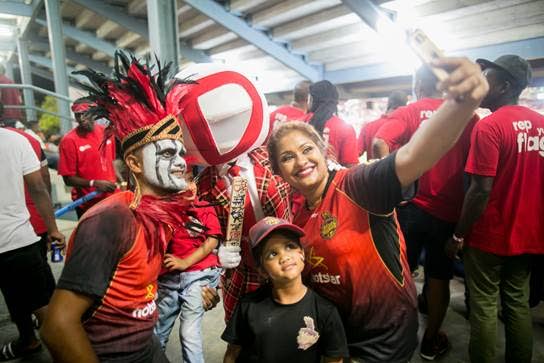 THE BIGGEST party in sport is back as the Hero Caribbean Premier League (CPL) bowled off, with the Trinbago Knight Riders (TKR) against the St Lucia Stars on Wednesday at the Queen’s Park Oval, St Clair.

TKR, the defending champions ended the gripping match with a resounding 100-run win over their opponents, much to the delight of the home crowd.

Since 2013, Digicel has served as a Founding Sponsor, supporting the tournament not just from a development standpoint, but also by introducing a new generation of fans to the game of cricket.

The tournament will take place across seven countries – Trinidad and Tobago, Guyana, Jamaica, St Lucia, Barbados, St Kitts and Nevis, and the United States – from August 8 to September 16.

After last year’s nail-biting final game between the Trinbago Knight Riders and the St Kitts and Nevis Patriots, fans would not want to miss a single minute of the action and, with CPL live coverage on PlayGo, they won’t have to.

“There’s nothing like being in the stands surrounded by people cheering with you for your team; and this, coupled with the carnival atmosphere of CPL makes it one of the hottest events for the summer,” said Tari Lovell, Group Sponsorship Manager at Digicel.

“With 34 matches in seven countries over two months, it’s hard to catch all the games in person, so this year we’ve made it easy for our customers through our PlayGo CPL activation plans. Customers can opt for a season pass or a day pass and watch our dedicated CPL channel with 2018 tournament coverage as well as past CPL games. Best of all, when customers watch the games on PlayGo, they enter to win a trip to watch the CPL finals in Trinidad and Tobago.”

Damien O’Donohoe, CEO of Hero Caribbean Premier League said, “The Hero CPL is delighted with the support that Digicel has given us since the tournament started in 2013. Just like CPL, Digicel is a massive part of Caribbean culture and the Caribbean economy.

“Staying in touch is such an important part of us delivering a world-class event and Digicel and their communications network are how we make this happen. CPL would not be possible without the support of the number one communications network in the Caribbean. It has been a brilliant partnership for CPL and long may it continue.”

Across the region Digicel will be setting up retail outlets at each CPL game allowing fans easy access to LTE plans, bundles, credit, sim upgrades, and Home and Entertainment bundles.

Specifically, in Trinidad and Tobago, customers should look out for the Man of Match or the Digicel Flag Crew and grab pics with them, which they should then post on their social pages with hashtag#CPL2018#playgo and tag Digicel TT, for a chance to win prizes and tickets to the CPL Finals on September 16.

Digicel’s social media pages will also keep fans up-to-date on all the games and giveaways, and provide an exciting behind the scenes look at the culture of each country, through their online content series Fan View.

Matches in Trinidad and Tobago will take place from August 8 to September 16, with all local matches at the Queen’s Park Oval and the finals at the Brian Lara Stadium, Tarouba. The competition and camaraderie among the 2018 teams indicate that this year will be bigger and better so fans can get ready for Cricket Played Louder.

Sat Aug 11 , 2018
ENGLISH Level 4 coach Paul Selby recently visited TT where he conducted English Level I and Level II courses with a number of active and prospective local squash coaches. The courses were organised by the ISquash Academy of TT (ISquash) in conjunction with the Cascadia Squash Club, St Ann’s. Selby […]