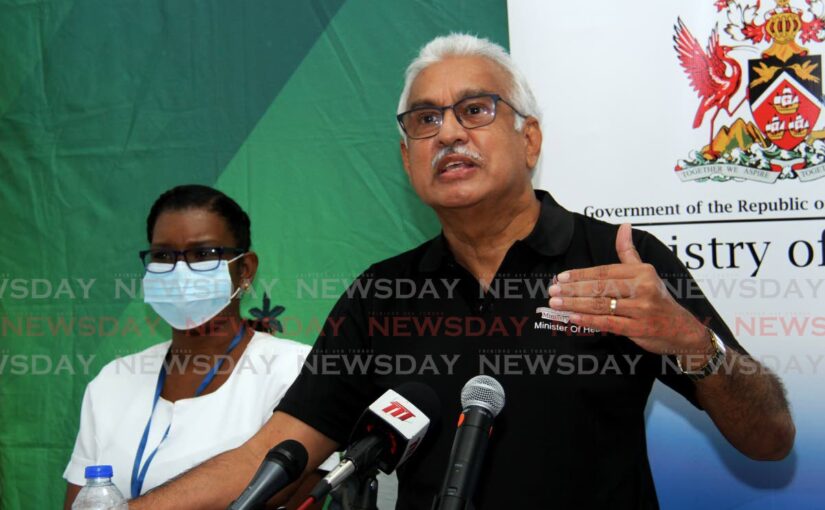 HEALTH Minister Terrence Deyalsingh said the silent majority of people in Trinidad and Tobago fully support Government’s decision that public-sector workers who choose not to be vaccinated against covid19 for non-medical reasons should be furloughed.

He maintains it is not a vaccine mandate.

Deyalsingh observed that many countries around the world have taken similar or more severe measures to boost their vaccination numbers and reduce the spread of the virus.

The UNC, the labour movement and Tobago House of Assembly health secretary Dr Faith BYIsrael have said the move is a form of mandatory covid19 vaccination.

Deyalsingh said, “The Government has launched no mandatory vaccination programme. There is no mandate to be vaccinated. What is happening now is an expansion of a voluntary programme to have all public-sector workers vaccinated, whether you are on the establishment, a contract worker or you work in a statutory body – that is, a body formed out of law or statute, like a Udecott or a Nidco.”

Workers in these types of organisations are being encouraged to get vaccinated and to start their vaccination by January.

Deyalsingh said this initiative does not apply to private-sector entities. He reiterated his appeal for people to get vaccinated against covid19 to save their lives and protect the lives of their loved ones.

“This is basically a life-saving mechanism. It is not meant to threaten anyone.”

He was concerned that the population has become numb to reports of 30 people dying daily from covid19 and the parallel health care system being put under strain by rising covid19 cases.

While acknowledging the views of those opposed to the government’s programme, Deyalsingh said they represent only a small portion of the population.

“Very often there is something called a silent majority that does not raise their voices but are in agreement.

“The best voice to listen to is not necessarily the loudest.”

Deyalsingh listed the TT Chamber of Industry and Commerce, the Energy Chamber the American Chamber of Commerce and former government ministers Devant Maharaj and Dr Bhoendradatt Tewarie amongst those who have expressed support for the initiative.

“These are the people who we need to give some coverage to and recommend that we listen to them because they like us, have the country’s best interest at heart.” Deyalsingh also said he was pleased in a conversation with business organisations three weeks ago to hear that none of them will be having any Christmas parties this month, as part of their efforts to reduce physical interactions amongst their members and potential spread of covid19.

While he was unable to provide any feedback about the public turnout at beaches on Monday, Deyalsingh welcomed the 5 am-noon daily opening of beaches, as announced by Dr Rowley on December 19. He urged beachgoers to adhere to all covid19 protocols.