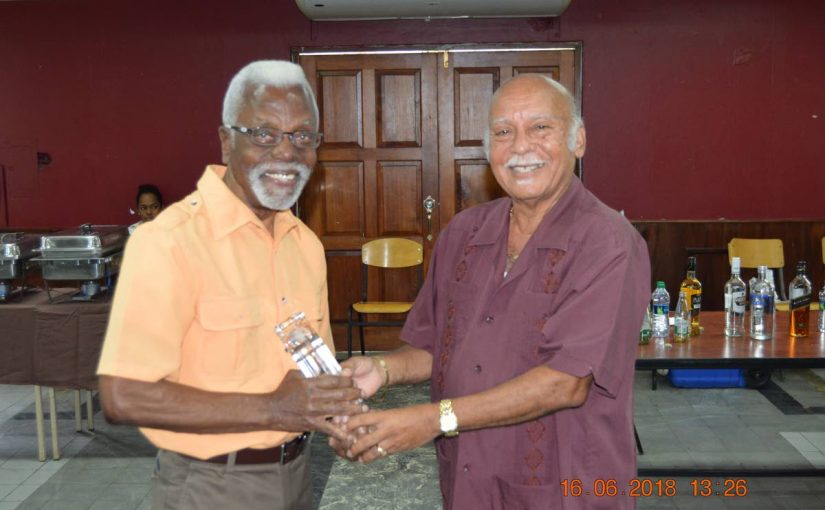 FATIMA College’s Decade Two Past Pupils Group (1955-1964) in very simple and informal function recently paid tribute to one of their peers chairman of the Integrity Commission (IC) Melville Baird.

The ceremony at the Mucurapo school began with mass celebrated by school principal Fr Gregory Augustine and a reading by Felix Rivers followed by a small reception in the hall.

Childhood friend Alec Clarke give an abbreviated version of his many life accomplishments – from lawyer to magistrate, senior magistrate, chief magistrate, High Court judge and the cream of his accomplishments judge of the International Criminal Court in The Hague, Netherlands. Clarke said when we thought Baird was done, he was appointed chairman of the IC.

Tributes by his one-time classmates came from Curtis Williams and former banker Kenny Joseph. The evening’s highlight saw Vernon Khelawan present Baird with a small award – a narrow, see-through award emblazoned with the college logo and the college’s Latin slogan “nintendo vinces” meaning “by striving you shall conquer”.

In response Baird, using his high but customary lexicon said, “To be the recipient of encomiums, laudations and recognition from you, my college friends, my classmates, my peers, for my judicial career and my present appointment… is an experience that is at once humbling and exhilarating.” He thanked the guys for their devotion, their loyalty and love.

Dr Alvin Ashton gave the vote of thanks and the group led by Carl Carmino sang the college song. There’s one exception the song wasn’t around in Decade Two, so there were many silent voices.

Mon Jun 25 , 2018
SAMANTHA PERSAD, a 27-year-old mother who resides in east Trinidad has started a one-man charity foundation to make a difference in the lives of the less fortunate, and by extension the better for our society. The foundation called Golden Givers which she started about a year ago is engaged in […]