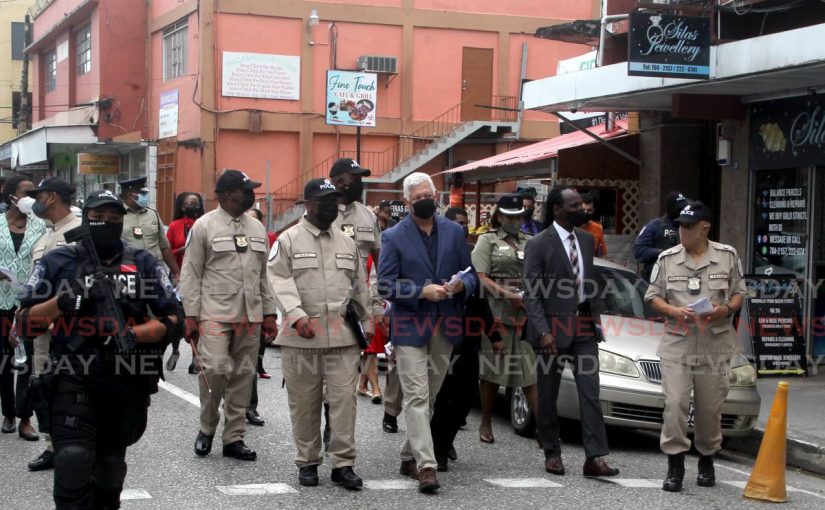 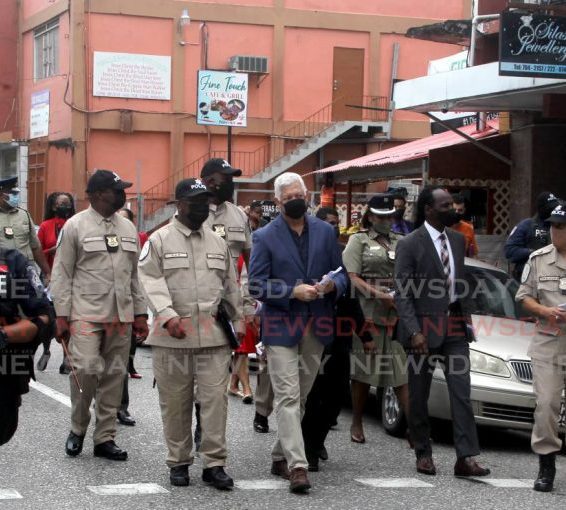 City police to increase presence in Port of Spain for Xmas

National Security Minister Fitzgerald Hinds, Deputy Commisioner of Police, McDonald Jacob and Port of Spain Mayor Joel Martinez tour the city with officers of the municipal police unit at the launch of its Christmas Anti-Crime Plan on Wednesday. – ROGER JACOB

The Port of Spain Police Service launched its Christmas anti-crime plan on Wednesday at City Hall in Port of Spain.

The theme of this year’s commemoration was “There is no place like a safe city.”

PRO of the city police Jamal Bennette, who delivered the anti-crime plan, expressed the need to increase police presence throughout the city to help create an environment in which the public can carry out their lawful business without fear.

He said it is committed to ensuring that proper policing is used to help alleviate the challenges that affect the safety, security and comfort of those living and shopping in the city.

Bennette said the objective of the plan included addressing the increasing level of criminal activity by removing the fear and perception of crime.

“Phase one will be high and effective visibility of policing. Effectiveness is what works. Officers must be able to interact with the public, pull out information and act when necessary, as quickly as possible,” he said.

He said a Christmas village had been created in the central business district – segmented into zones one to four – that would encompass various streets, where both uniformed and plainclothes officers would be stationed.

“Plainclothes officers will be used to gather information that would then be passed on to uniformed officers for quick apprehension,” he said.

He said there would be continued collaboration with the city corporation to regularise illegal vending.

“Though it is not such a serious crime, it still affects people who are legally registered and illegal vending takes away from their hard-earned money,” he said.

He said the move-along policy would be used to persuade the homeless to use the available shelters while offering mental-health evaluations to those in need.

He also said a quick and effective approach to infringements would be used to alleviate traffic in the city during the Christmas season.

City Police Supt Glen Charles said in the first conversation he had back in 2016 with DCP McDonald Jacob, then a senior superintendent and head of the Port of Spain Division, Jacob had told him an organisation without vision would perish.

“What that gentleman did was brought all the different law-enforcement agencies together. He even included the business sector, where he had several meetings to address the challenges and formulate how best they could police the city,” he said.

Charles said the TTPS operation plan had been formed in 2016 as a means to help with policing the city of Port of Spain.

Jacob said the operation plan 2016 had been created as a foundation in the way forward in crime-fighting.

“That was the year we really made a change in Port of Spain,” he said.

He said this 2021 initiative is another testimony to the co-operation, co-ordination and tactical approach by the various law-enforcement departments to ensure the city is safe.

“The TTPS is elated by the support that we are receiving from the TTMPS in the crime-fighting initiatives in the city of Port of Spain,” he said.