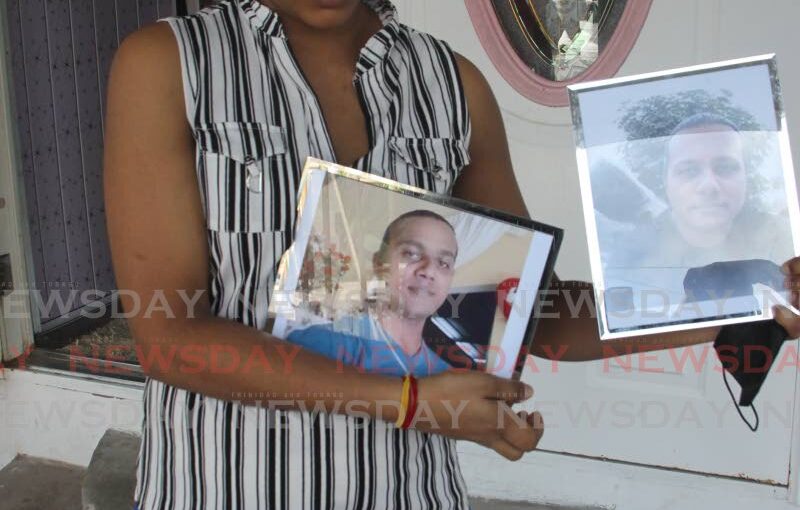 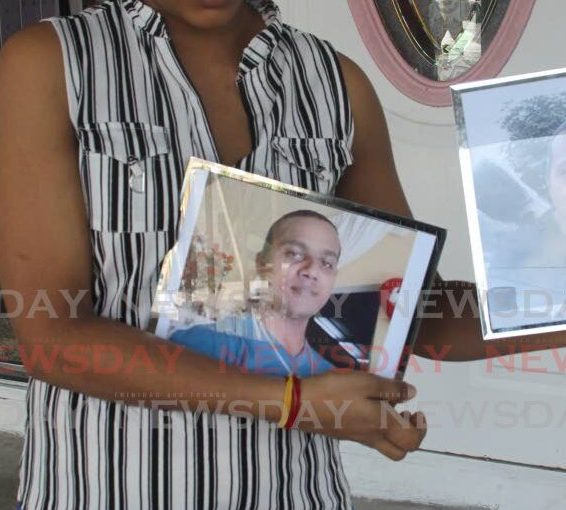 ALL I HAVE LEFT: Vicky Nanack holds framed photos of her husband Hansraj outside the family home in Cumuto on Wednesday. PHOTO BY ROGER JACOB –

THE two young children of Hansraj “Ronnie” Nanack believe he has not come home as yet from work on Wednesday, as their relatives have not told them that he was killed two days ago in a freak accident in Tobago.

Relatives said they just do not know how to break the tragic news to the children.

In fact, Nanack’s wife Vicky said on Wednesday during an interview at the family home in Cumuto, that Nanack’s car is parked elsewhere since its presence in the garage was the sign his children used to know he had arrived home from work.

She said that as far as his five-year-old son and two-year-old daughter are concerned, “daddy still in work and will come home soon.”

Nanack, 42, was crushed to death on Monday when the cement truck he was driving crashed off the road in Speyside, Tobago.

Police received a report that the Alescon Readymix Ltd employee lost control of the truck along Canal Road while on his way to Speyside. A fire official told Newsday the truck ran off the road and into a ravine where it flipped. Nanack’s body was removed to the Scarborough General Hospital mortuary in Signal Hill.

She said he had only began working with the company three months ago.

On Tuesday a representative from the company told Newsday that it would launch its own investigation into the accident following the completion of the police investigation.

As she watched her children playing nearby, Nanack said she wished her husband’s death was just a bad dream. “If only I could wake up and see my husband still alive and with us,” she said.

She said this is not the first time the family was upended by a tragic accident.

Thirteen years ago, she said, her aunt and a cousin were standing in Santa Rosa when a truck last control and ran into them. Her aunt died on the spot and the cousin succumbed to her injuries while in hospital.

Nanack said she is unsure if her children, especially her daughter, would understand why their father won’t be returning home when she decides to break the news to them that he is dead. The last time they saw their father was on Sunday.

“Once they see that car pull up in the yard, they know daddy is home. We just don’t know how to tell them as yet. They still think their father is working in Tobago,” Nanack said.

“Mammy you alright,” her son asked as he saw her wiping away tears during the interview.

“Honestly, I don’t know how to describe this. I don’t know what to tell my children. It’s shocking, I still can’t believe it. After all the death we experienced in this family, this one hit me really hard.”

Visiting relatives sat quietly in the yard while Nanack’s children played, unaware of the deep sorrow in their midst.

Nanack left for Tobago on Sunday. On Monday he spoke to his wife before heading out to the company’s Canaan branch to transport cement to Speyside for an ongoing Tobago House of Assembly project.

“I called him so he could talk to the children because they were being a little naughty. And over the phone during the conversation, he told me to take care of them and he asked me not to quarrel with them while he was away and just to be there for them.”

Asked to describe her husband, Nanack couldn’t help but smile through her tears.

“He was a very religious man and he was happy with life. He enjoyed making jokes with everyone. He never showed bad-mind to anyone. He didn’t smoke or drink. He enjoyed praying and fasting. He was a good father and an amazing husband to me.”

She said he had big plans for the family and was looking forward to reuniting with his father whom he hadn’t seen since he was a child.

An autopsy is expected to be done on Friday.