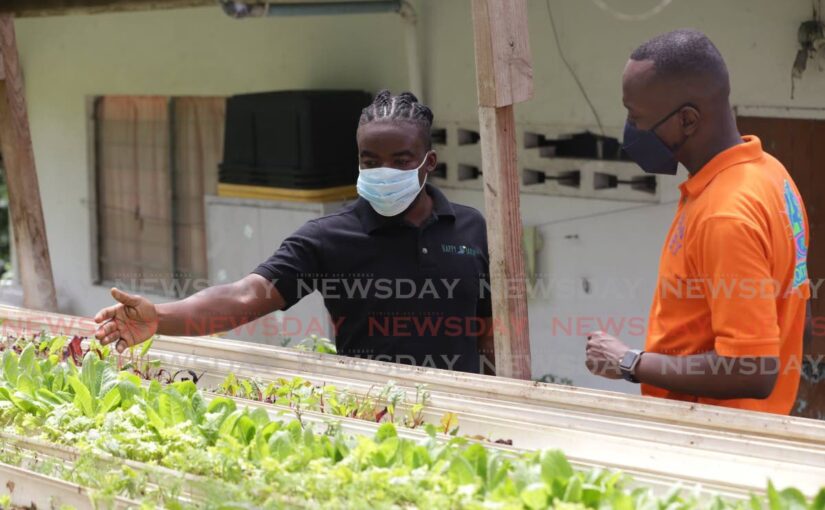 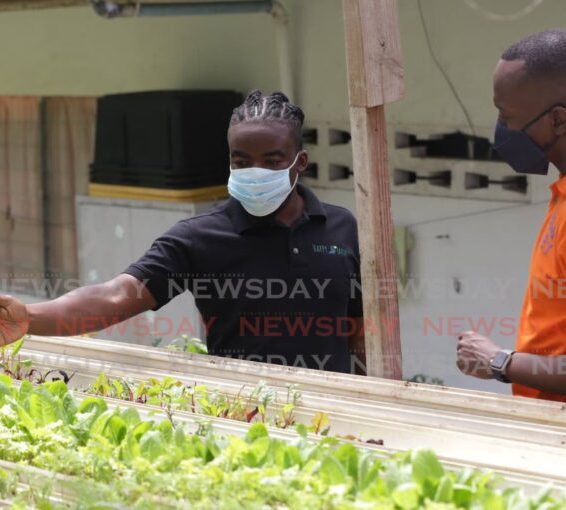 Farmer Oje Alexander, left, shows Chief Secretary Ancil Dennis some of his crops on a tour of his farm at Plymouth Road recently. – Photo courtesy THA

The Tobago House of Assembly (THA) is set to invest some $50 million in a farmland development programme across six agricultural estates on the island.

And by this week, the THA will begin distributing documents to approximately 30 farmers at Lammy Road, Argyle, to legally occupy lands in the area.

Chief Secretary Ancil Dennis made the announcements on Thursday during a political meeting in the Belle Garden/Glamorgan electoral district to endorse the PNM’s candidate for the December 6 THA election Kenneth “Puncheon” Thomas.

Dennis said Lammy Road will be featured in the first phase of the programme as will Belmont Road, an agricultural area further east.

“We are in the first phase going to develop some 80 acres of land for agricultural purposes.”

He said he has already approved a list of 30 farmers engaged in livestock farming.

Dennis told the audience he was very impressed with the work being done by young poultry farmer Nyron Orr in Mt St George.

“He is conducting a very impressive poultry situation. I am saying you have a situation at that farm where there are over 2,000 birds, layers and even broilers. I am saying that young man is producing and supplying supermarkets across the island, supplying restaurants and supplying individuals.”

But Dennis said Orr was operating in an area with several residential buildings and, as a result, people have been complaining about his operation.

“But I gave that young man the commitment, your Tobago House of Assembly will develop lands in an appropriate location and we will make land available to you and you will be in a position not only to transfer your operations but also to expand.”

He assured Orr will be accommodated at Belmont Road.

Dennis said in phase two of the programme, some 40-50 farmers will occupy lands at Richmond estate.

He added some 30 farmers will also occupy 100 acres of agricultural land at Friendship estate.

“So, I am saying through that farmland development programme, we are going to see the development of almost 600 acres of land with 200-300 farmers across Tobago moving into those locations and quickly improving our food production situation.”

He said fishermen who wish to upgrade from pirogues to larger vessels will get the opportunity to do so through the Tobago Agri-Business Development Company.

“I have instructed them to look at a situation that will assist fishermen whether in companies, whether in cooperative arrangements, to purchase bigger boats and I am saying we are going to ensure that we move our fishermen here in Tobago East and in other parts of Tobago – for those who want to step up to the plate and for those who want to take on the challenge – we moving them up from pirogue vessels to larger commercial vessels to go out there and catch fish and produce for our people of Tobago.”