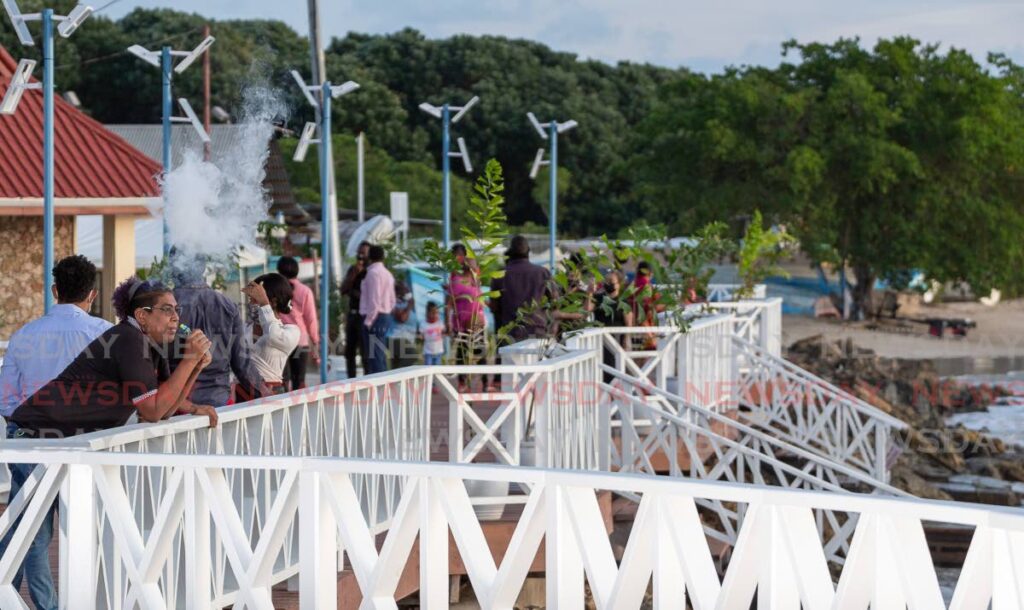 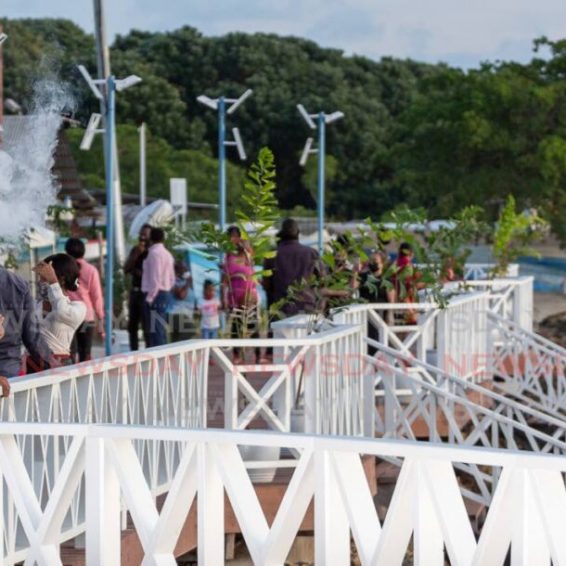 Despite numerous setbacks, the Buccoo boardwalk project, which incorporates an I Love Buccoo sign at the Buccoo Bay waterfront, has been commissioned.

Speaking on Monday during the ceremony, Chief Secretary and PNM candidate for Buccoo/Mt Pleasant Ancil Dennis said the project was conceptualised since 2012 when in one of his very early political speeches he told residents that he had a dream.

“Known for the Buccoo reef, known for crab and goat racing and a world-renowned event, known for one of the best steelbands in the country – the Buccooneers – and here we had a beachfront that was quite dilapidated and was unbecoming of the people of Buccoo and the people of Tobago by extension, and therefore we had to fix it.”

People enjoy an afternoon along the newly-opened Buccoo boardwalk on Monday. – David Reid

He said the discussions started, the consultations began, and the conceptualisation started but according to Dennis, it was not smooth sailing.

“Actually, over the last couple years of this project, the goings got rather tough. The project was not processing as well as we would have liked and when I picked up the responsibility of Chief Secretary, I remember conducting a site visit at the location and what I witnessed was really a travesty in that, while we were spending taxpayers money, we were not necessarily getting value and quality for that money – and action was taken.

“That contractor was removed from the project and a new contractor had to be brought on to complete that project.”

He said Buccoo is the first of similar projects to be done across Tobago.

Dennis, who also holds the portfolio for tourism, said as part of the island’s tourism thrust and as part of the overall improvements to be done on the island to facilitate Tobagonians themselves, there is as urgent need to establish clean, green, beautiful, pristine and safe green spaces.

“What the forensics persons would say was a cold case that was resurrected and finally brought to completion.”

She said it started with consultations with the villagers in 2015 and by June/July of 2018, a contract was awarded to a contractor to start and complete the project.

“This project ground to a halt due to a number of challenges – funding and also other issues with the contractor. Then we had the pandemic.

“I said, ‘Will we ever complete this project?’ Eventually, we started again, then we had problems with the contractor with the quality of work that was being done and it was the first time that I had to terminate a project and start again with another contractor who thankfully took the job, ran with it and completed it so that we can be here this afternoon.”