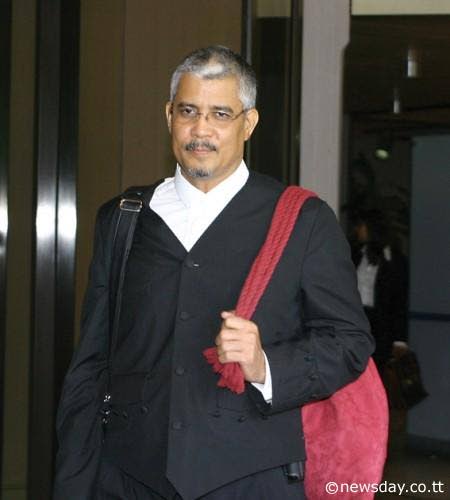 FOUR transgender Guyanese women have asked that country’s final appellate court, the Caribbean Court of Justice, to strike down an 1893 post-slavery vagrancy provision which led to their convictions in 2009.

Arguing the case for the four at the Port of Spain-based court was Senior Counsel Douglas Mendes, who held that the law was “too vague” and penalises someone for “not conforming to stereotypes.”

The court’s ruling on the case has been reserved.

“The law makes into a criminal a man or woman acting contrary to stereotypes. It is saying each of us should stay in our corner. It cannot be that a man dressing as a woman is an improper purpose,” Mendes said.

He also said to compare a man dressing as a woman, and a woman as a man, was stereotyping

The four women – all of whom were in court for yesterday’s hearing – have challenged a ruling of Guyana’s Court of Appeal which dismissed their case, in which they contended that country’s colonial vagrancy law discriminated against them and violated equality provisions in the Constitution.

At the time, then chief magistrate Melissa Robertson told them they were “confused” and should “go to church and give their lives to Christ.”

Mendes said it could not be known what conduct the police considered improper unless the legislation offered guidelines on what is proper or not.

“People need to know what conduct is prohibited or not.”

He also said the law violated a citiens’ right to the protection of the law.

“Vague laws do not protect citizens from arbitrary power,” he said, adding that the court had a right to incorporate human rights in domestic law.

Asked by CCJ President-elect Justice Adrian Saunders if the four women wanted their convictions to be struck down, Mendes said although they were not challenging their convictions, they will not object to having them quashed.

“They are prepared to live with the convictions, but if they are struck down, they won’t have to be looking over their shoulders.”

As part of their case, the four have condemned the conduct of State officials and are also arguing that the Constitution’s savings law clause does not prevent the court from reviewing colonial law.

Attorney for Guyana’s government Kamal Ramkarran said the four have not advanced evidence to show how the law was discriminatory and unconstitutional.

“All we have is a contention that they are afraid of being convicted again.”

He said they also have not shown how the law targeted them as transgender women.

“How do we draw the inference it (the law) targets transgenders?”

He also said if the laws were applied properly, transgender people should not be targeted.

Ramkarran argued that unless the law were found to be unconstitutional, the court should not strike it down because of it being “archaic or silly.”

“Parliament is the place to determine if laws are archaic or silly,” he said, adding that no law in Guyana prevented person from dressing how they wanted.

In a unanimous decision last year, acting Chancellor of Guyana’s Judiciary, Justice Carl Singh, acting Chief Justice Yonette Edwards-Cummings and Justice Brassington Reynolds upheld the ruling of former acting Chief Justice Ian Chang that both men and women were free to cross-dress in public once the reason for doing so was not for an “improper purpose.”

Chang, in his ruling, held that cross-dressing by men was not a crime.

The four, in 2010, asked the Guyana Supreme Court to strike down the law, which left them open to arrest.

Chang, who ruled that the police had violated the rights of the four men during a 2009 crackdown, said he did not believe the law amounted to “discrimination,” in violation of Guyana’s constitution.

At the Court of Appeal, the four sought clarity on what constituted “improper purpose.” They contended that there was uncertainty in the terminology used in the statute and that it contravened their rights to equality and freedom of expression while it was discriminatory. They also express fear of being targeted again because of their gender expression.

Thu Jun 28 , 2018
News Americas, NEW YORK, NY, Fri. June 29, 2018: As the Columbia-Poland World Cup match blared in the background, two Columbian football fans sat face to face in a Bogota restaurant, but they didn’t speak. Instead, one of the men used his hands to communicate every kick of the ball […]