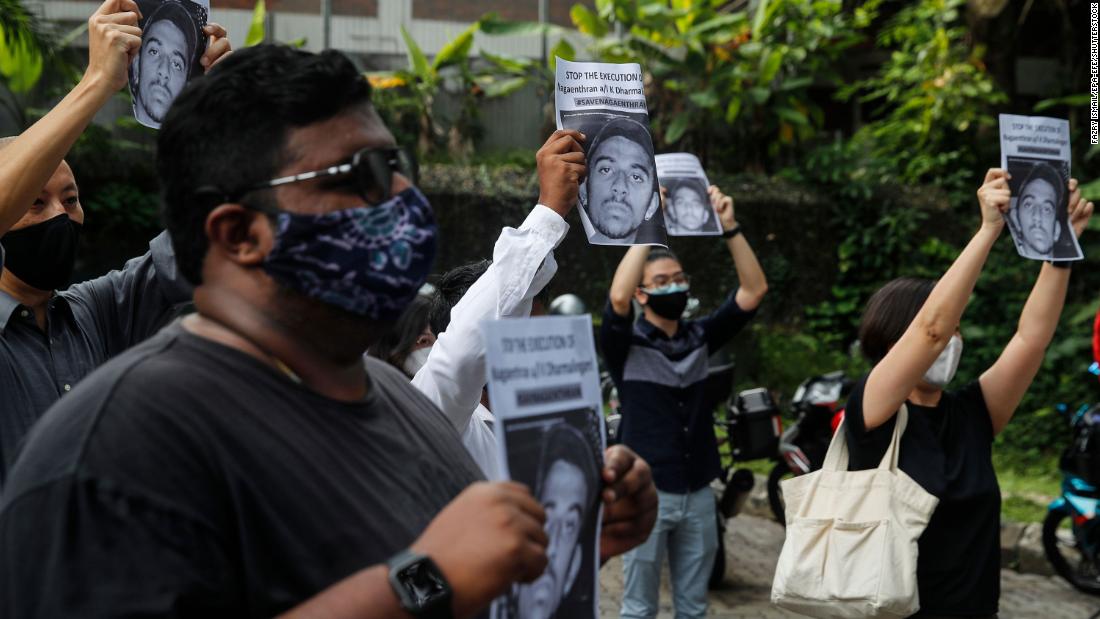 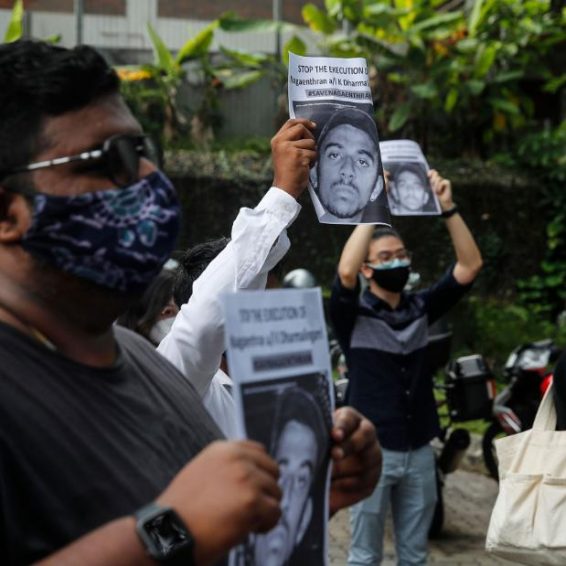 3 weeks ago·4 min read
ShareTweetPinShare
Home
World News
Campaigners make last effort to save man with disabilities from execution in Singapore
The content originally appeared on: CNN
Nagaenthran K Dharmalingam, a 33-year-old Malaysian man, was arrested in 2009 for bringing 42.7 grams (1.5 ounces) of heroin into Singapore. He was due to be executed by hanging on Wednesday.
On Monday, the High Court ordered a stay of execution “pending the hearing of the appeal to the Court of Appeal against the decision of the High Court,” his lawyer in Singapore M. Ravi posted on Facebook. Lawyers had sought a prohibitory order against the execution, having exhausted all other legal appeals. A petition to the President for clemency was also unsuccessful.
It is as yet unclear what the next steps are.
Dharmalingam’s lawyers and rights groups fighting to save him say Singapore is violating international law by executing a person with a mental impairment.
Read More
Singapore’s Ministry of Home Affairs said in a statement Dharmalingam “was accorded full due process under the law, and was represented by legal counsel throughout the process.”
However, his lawyers argue that Dharmalingam should not have been sentenced to death under Singaporean law because he was incapable of understanding his actions. A psychologist assessed his IQ to be 69, which is internationally recognized as an intellectual disability. At his trial, the defense also argued he had severe attention deficit hyperactivity disorder (ADHD), borderline intellectual functioning, and severe alcohol use disorder.
Dharmalingam has spent a decade on death row and during that time his condition has further deteriorated, his lawyers said.
“He has not a very good sense of what is happening around him,” said N. Surendran, a Malaysian lawyer who is representing Dharmalingam’s family, and adviser to Malaysian NGO Lawyers for Liberty. “He is disoriented. He’s got no real clue of what is going to happen to him.”
Surendran said executing Dharmalingam “would be tantamount to executing a child.”
Singapore has some of the strictest drug laws in the world. Trafficking a certain amount of drugs — for example, 15 grams (0.5 ounces) of heroin — results in a mandatory death sentence under the Misuse of Drugs Act. It was only recently — and after Dharmalingam’s case began — the law was amended to allow for a convicted person to escape the death penalty in certain circumstances.
Dharmalingam was convicted of drug trafficking and sentenced to death by Singapore’s High Court in 2010. His first appeal was dismissed a year later. Another appeal after Singapore amended its drug law was again rejected in 2018.
“The Court of Appeal affirmed the High Court’s decision and said that it was satisfied that Nagaenthran clearly understood the nature of his acts,” the Ministry of Home Affairs said in a statement.
The court argued Dharmalingam transported drugs “in order to pay off his debts” and he knew it was unlawful so he “attempted to conceal the bundle by strapping it to his left thigh.” It also said Dharmalingam was “continuously altering his account of his education qualifications, ostensibly to reflect lower educational qualifications each time he was interviewed.”
“This was ‘the working of a criminal mind, weighing the risks and countervailing benefits associated with the criminal conduct in question.’ Nagaenthran considered the risks, balanced it against the reward he had hoped he would get, and decided to take the risk,” the ministry said in its statement, quoting the court’s decision.

Dharmalingam’s case has sparked international condemnation. Malaysian Prime Minister Ismail Sabri Yaakob has written to his Singaporean counterpart Lee Hsein Loong asking for leniency, Malaysian state media Bernama reported.
More than 62,000 people have signed a petition urging Singapore’s President Halimah Yacob to issue a pardon. Last week, dozens of activists protested outside Parliament in the Malaysian capital Kuala Lumpur.
Human Rights Watch, Amnesty International, Anti-Death Penalty Asia Network (ADPAN) and other rights groups have also called on the Singapore government to halt the execution.
“Executing a man with a disability, who was convicted after an investigation and trial that provided no disability-specific accommodations, violates international law and won’t deter crime,” Emina Cerimovic, senior disability rights researcher at Human Rights Watch, said in a statement.
“Singapore should commute Nagaenthran Dharmalingam’s sentence and amend its laws to ensure that no one is subjected to the death penalty, certainly not people with intellectual or psychosocial disabilities.”
Surendran, the lawyer, said the execution order was “sickening beyond belief.”
“We will work until the very last minute to save Nagaenthran but of course, as you can see time is running short,” he said.

Dharmalingam’s family, who live in Ipoh, northwestern Malaysia, were notified of his impending execution only on October 26. His lawyer in Singapore, M. Ravi posted the letter to Facebook, calling the order “state sanctioned murder.”
The letter stipulated only five members of Dharmalingam’s family would be allowed to enter Singapore and would need to contend with a list of Covid regulations.
Several family members who managed to get to Singapore and meet with Dharmalingam in Changi prison are “shocked” at his condition, Surendran said.
“They see a completely different person, they’re not able to get through to him,” he said.
It was also a “tremendous challenge” for them to travel to Singapore from Malaysia due to the various financial costs and Covid restrictions imposed, he said. “It has been very difficult for the family.”
If the execution goes ahead, Singapore would be in breach “not only of customary international law, but also their own obligations under the UN convention on the rights of disabled person, which they have signed and ratified,” Surendran said.