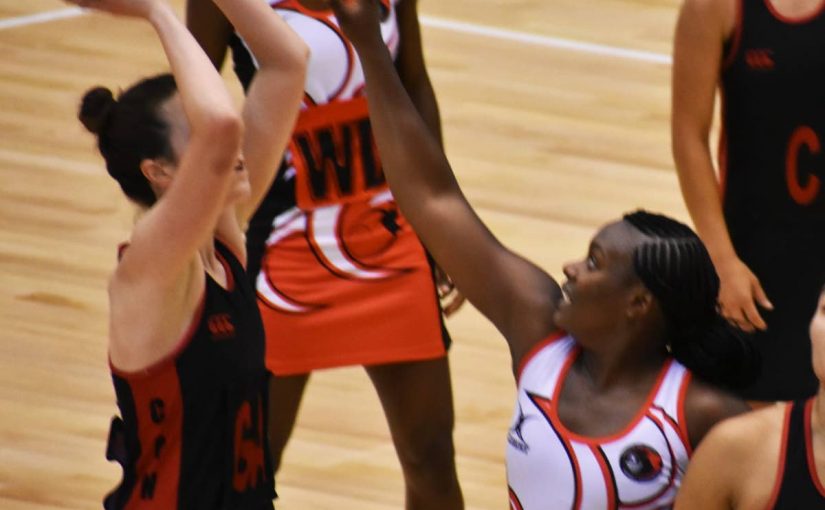 THE national netball team kept on track to retain their Americas Federation Netball Association (AFNA) Championship title by whipping Canada 80-26 for their second win in as many matches yesterday at the Garfield Sobers Gymnasium, Barbados. Coach Leslie ‘Pepe’ Gomes made a few changes to the previous game against USA which they won 86-29 on Saturday.

TT took a few minutes to settle to the pace of the game, but once Seemungal and skipper John-Davis started to find passes to their proficient shooters Wallace and Mc Collin, the match became a lot easier for the Caribbean team. The two foreign-based players were perfect in their shooting, scoring 23 goals as opposed to Canada’s six goals at the end of the first quarter.

The focus in the second period was Jack in the heart of TT’s defence. She guarded the ring exquisitely to limit the Canadians to only six goals, while her team added 21 for a half-time lead of 44-12. Wallace ended with 32 goals from 34 attempts, and Mc Collin chipped in with 12 goals.

Coach ‘Pepe’ Gomes substituted his professional shooters at the half, replacing them with the experienced Cooper and youngster Hollingsworth. In the third quarter, Hollingsworth had 11 goals from 14 attempts, while Cooper was perfect with eight goals.

The North Americans had a spirited performance in the final period, limiting TT to only 16 goals — their lowest score in a quarter thus far, while they added eight goals to finish the match 80-26. Cooper shot perfectly with 22 goals, while Hollingsworth chipped in with 14.

Coach Gomes said after his team’s victory, “We decided to work on defence, so I thought it went pretty well. We were trying to trap in the centre court so it worked well, just to fine-tune a little better.”

Commenting on Jack’s outstanding performance, he said, “We had no choice but to move her back goal-defence because Kemba Duncan is nursing a little injury so we gave (her) another day to rest.” He added, “We are trying to get the centre-court zone press working properly, we don’t have enough time in practice so we are working it in the game.”

TT are aiming to secure one of the two spots available to qualify for the Netball World Cup in Liverpool next year July. They will face their unbeaten and taller Grenada at 8pm today at the same venue.

Keshorn to miss rest of 2018 season

Tue Aug 28 , 2018
DOUBLE Olympic men’s javelin medallist Keshorn Walcott will miss the rest of the 2018 track and field season to rest and fully recover after undergoing two elbow surgeries last year. The 25-year-old Walcott, who copped gold for TT at the 2012 Olympic Games in London, England and bronze at the […]