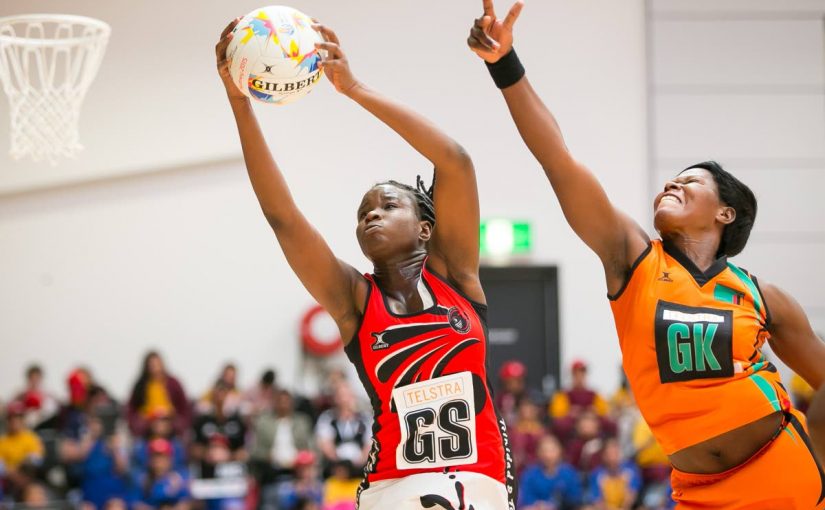 A VICTORY against St Vincent, today at 4pm, will clinch a spot for the TT Netball team in the Netball World Cup, in July 2019, in Liverpool. TT seems to be peaking at the right time as they registered their largest victory in the Americas Federation Netball Association (AFNA) Championship by whipping Argentina 112-12 yesterday at the Garfield Sobers Gymnasium, Barbados.

Star player Samantha Wallace said, “It is important to stay focussed on all games regardless of the opponent’s strength or weakness…our mindset going forward is to maintain our intensity, execute our game plans and meet our various goals.” Knowing that qualification is one game away, Wallace said, “We came here not just to compete but to go home with nothing but first place.”

This resounding victory yesterday means the “Calypso Girls” are now unbeaten in their five matches in the tournament and sit on top the round robin table alongside the host team Barbados, who are also unbeaten. Once TT and Barbados are victorious in their matches today, their clash tomorrow is a virtual final. For the third consecutive match, coach Leslie “Pepe” Gomes started the same team which seems to be his strongest combination. Starting were: Samantha Wallace (goal-shoot); Kalifa Mc Collin (goal-attack); Rhonda John- Davis (wing attack); Candice Guerero(center); Onella Jack (wing defence); Kemba Duncan (goal-defence); and Shaquanda Greene (goal-keep).

It was one-sided traffic from the first whistle with TT hurrying to a 30-3 lead at the end of the first quarter against the South Americans. Coach “Pepe” rotated his squad as early as the second period but the goals continued to flow with Joelisa Cooper doing the bulk of the scoring. The Caribbean team held a 63-6 advantage at half-time.

TT had their lowest scoring quarter in the third where they only added 20 goals for a score-line of 83-9.However, in the fourth they passed the 100 goal milestone for the first time in the tournament; completing the match 112-12. The defensive efforts made by the TT players are visible and they still kept their structure even against their weaker challengers.

TT’s previous match the day before against St. Marteen was another blowout victory for the tenth ranked Calypso Girls, who won comprehensively at 95-8. The twin-island team scored 26 unanswered goals in the first quarter then allowed only two goals from the opponents at half-time for a score line of 54-2. The defensive pairing of Greene and Duncan was outstanding, shutting down any goal attempts from their Caribbean neighbours. The last two quarters followed the same trend as the previous two as TT completed the match 95-8. Wallace scored 38 goals, while Mc Collin added a perfect 16 goals. Substitutes Cooper contributed 30 goals whereas Hollingsworth chipped in with 11.

Sat Sep 1 , 2018
AFTER two years in the wilderness, Ataulla Guerra said he feels honoured to earn a recall to the national football team. The 30 year old Guerra was named in a 20-member TT team who will travel to Girona, Spain to face the United Arab Emirates (UAE) in a friendly international […]