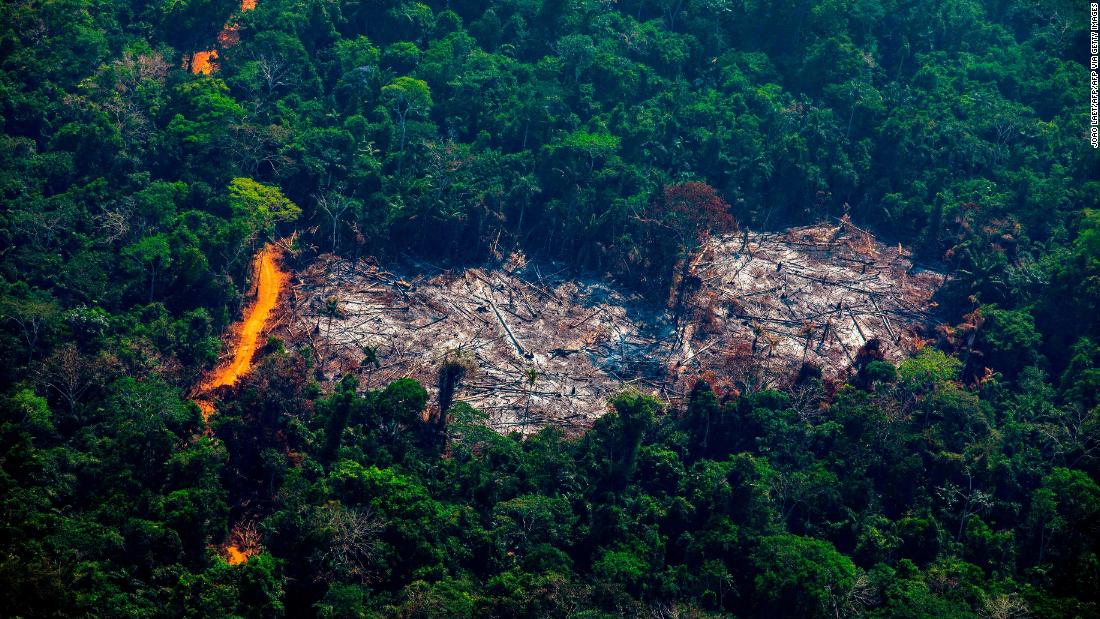 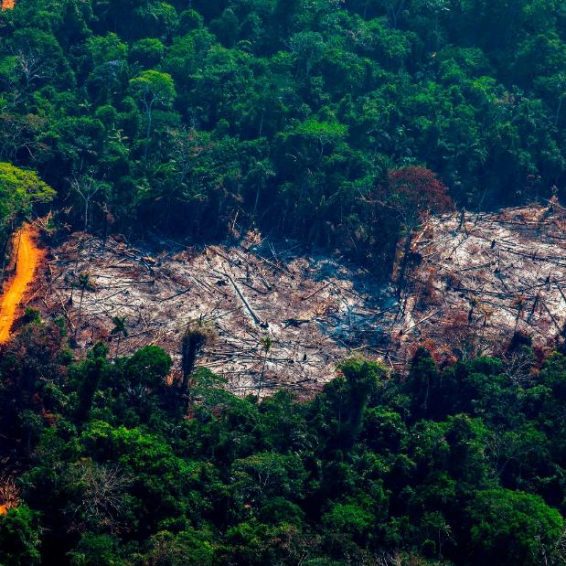 Brazil brings big green plans to COP26. But its track record is dismal

1 month ago·7 min read
ShareTweetPinShare
Home
World News
Brazil brings big green plans to COP26. But its track record is dismal
The content originally appeared on: CNN
But can the administration of current President Jair Bolsonaro be believed? It has won little credibility with local environmental advocates, after previously dismantling federal legislation and environmental agencies intended to combat deforestation, and promoting increased mining and oil extraction in indigenous territories and publicly protected lands.
The government has also favored investments and credit to grow the country’s agricultural industry — a sector often at odds with the protection of Brazil’s vast wild lands.
Bolsonaro himself has also decided not to attend COP 26 personally — raising questions about his personal commitment to tackling climate change. Although Brazil is taking the second largest delegation to COP26, it is led by Environment Minister Joaquim Leite.
Read More
“I reinforce our commitment to generating a neutral greenhouse gas economy at the same time creating jobs and creating income contributions to Brazil,” Leite said at the Brazil pavilion in Glasgow on Monday.
“Brazil is part of the solution,” he promised, echoing Bolsonaro’s pre-recorded video message to the summit.

How Brazil will do it

Brazil’s environment ministry last week unveiled a “Green Growth” program to achieve its climate goals.
In a press release, it said the program would attract investments from the world market and generate sustainable jobs. Bolsonaro signed two decrees establishing the program and an oversight commission, but so far the government has not articulated any specific targets or accountability mechanisms to measure the success of the program.
Most crucially, perhaps, the program outline does not address preventing deforestation on the federal level. Deforestation is the biggest cause of greenhouse gas emissions in Brazil, which is the world’s sixth largest carbon emitter according to environmental watchdog the Climate Observatory.
Brazil’s greenhouse gas emissions shot up by 9.5% in 2020 — the opposite of pandemic-induced trends in other parts of the world — according to data collected by the Greenhouse Gas Emission Estimation System, a platform that monitors greenhouse emissions in Brazil.
The cause? Deforestation.
“If the Brazilian forest were a country, it would be the ninth largest emitter in the world, ahead of Germany,” says the study.
Bolsonaro, who is up for election next year, has long positioned himself as a pro-business president focused first and foremost on bolstering the country’s economy. Fittingly, most anticipated “green growth” projects are designed to compensate farmers and ranchers for protecting the environment, improving their technologies so they can become low-emission producers, helping them to access the carbon market, and investing in the biofuel industry.
“The biggest challenge of ‘green businesses’ is to undo the idea that government actions are only punitive,” Leite told the audience during the ceremony on Oct 25.
Brazilian Environment Minister Ricardo Salles resigns amid Amazon illegal logging probe
One of the programs named Green Rural Producer Certificate “represents a payment instrument for environmental services to farmers in order to promote environmental conservation, as well as the adoption of technologies and good practices that reconcile agricultural and forestry productivity, with a reduction in environmental impacts,” according to the statement.
Another project called ‘Forest + Agro’ aims to offer financial incentives to rural producers to protect reserves and areas of permanent protection. But the main project is the Plano ABC+, which offers a line of credit to producers to promote low carbon farming.
But Sergio Leitao, director of Brazil’s Escolhas Institute, a sustainable development-focused think tank, says the plan merely restates existing sustainable development goals without committing new resources to them.
“When you look at this plan, it has nothing. It repackages pre-existing projects and commissions. And those projects already exist, but investments for a sustainable and low-carbon agribusiness are still very low,” says Leitao, referring to government investments.
Suely Araujo, senior public policy specialist at the Climate Observatory, adds that she doubts the government’s ability to monitor the sustainability of rural producers.
“Today, the instrument that they would use to certify and compensate rural properties — the CAR (Rural Environmental Registry) — has not yet reached its final stage, which is when the information given by the farmer is cross checked and confirmed by the state agencies,” says Suely Araujo.

Failure to stem deforestation so far

The Bolsonaro administration’s track record so far has been poor. During Bolsonaro’s first year in office, in 2019, deforestation in the Amazon rose 34%. The next year, it rose another 7%, according to INPE, the government agency that monitors deforestation in the country.
This year, INPE predicts a small reduction in deforestation rate of around 1 to 2% — but that still means that from January 2021 to September, over 7,000 square kilometers of forest were destroyed, an area nearly nine times the size of New York City.
Ninety percent of all deforested areas in the Amazon biome have been turned into pastures, according to an August report by the sustainable development research group Imazon, or Amazon Institute of Man and Environment.
The government has also cut funds and promoted the dismantling of environmental agencies and rolled back the protection of the remaining forest areas, including indigenous territories, national or state parks, extractive reserves, and all land that remain under the power of the state.
Parts of the Amazon, which serves as a carbon sink for the world, are now turning into a source of carbon emission not just because of deforestation, fires and land occupation but because increasingly dry conditions are stressing trees, according to a recent study by INPE’s Greenhouse Gas Laboratory.
“Deforestation causes an impact during the dry season conditions. Dry season conditions become hotter, drier and longer. These make the forest itself to be more stressed, leading trees to die, and this causes more emission than absorption. This forest becomes a source because the mortality (of trees) is bigger than the growth from the forest,” says one of the lead researchers Luciana Gatti.
Meanwhile, two bills are currently being debated in Congress that could further encourage deforestation: They would grant amnesty for illegal land occupation, facilitating the regularization of illegally deforested public lands, and the mining and other activities in indigenous territories.

A country already at risk

Brazil has already suffered from a series of severe climate crises during the past year: extreme temperatures followed by intense floods, severe droughts, which resulted in its worst water shortages in over 90 years.
According to the National Electric System Operator, water scarcity in reservoirs and hydroelectric dams has also created an energy crisis, forcing the country to turn on its thermoelectrics and to import energy from neighboring countries.
Intense drought and record frosts this year have also harmed agricultural production in Brazil. The National Supply Company (Conab) has forecast a total 2021 grain production volume 1.2% lower than last year, despite its planted area having increased by 4%.
The effects of Brazil’s unsustainable development so far can be seen clearly in the Amazonian state of Rondonia. Flying over the state in September with the Amazon in Flames Alliance, a partnership of environmental organizations, CNN could see farms and cattle ranches become sparser upon approach to Mapinguari National Park. But within a few miles, large scars of burnt forest and trees still in flames became visible — areas that will soon turn into pasture.
Indigenous boys’ drowning prompts allegations over illegal mining
According to Brazilian land-use mapping project MapBiomas, Rondonia has the fastest deforestation rate between 1985 and 2020 in Brazil, losing about 38% of its total native forest coverage.
Rondonia’s remaining forest is found today only within conservation areas, namely public parks, indigenous territories and reserves. It has become a series of disconnected fragments of forest that suffer constant incursion by illegal loggers, miners and land grabbers.

A dangerous country for environmentalism

And while the Brazilian government may present an optimistic front at COP26 this month, many of those striving for a better planet at home are risking their lives.
Last year, 20 land and environmental defenders were murdered in Brazil, according to monitoring organization Global Witness.
Members of the Rioterra Study Center, an organization that works on the development of projects that combine conservation and sustainability in Rondonia, told CNN they have recently faced death threats due to their work.
227 people were killed defending the environment last year, a new report shows. That’s a record.
Milton da Costa, who works at the Rioterra organization coordinating large scale projects of land restoration and reforestation inside Conservation Units, was ambushed by two armed men in mid September this year and received death threats for trying to implement a reforestation project near the city of Machadinho d’Oeste.
“I looked at him and saw that he was also carrying a gun, probably a 38 (pistol). The other guy was telling him: shoot him, shoot him right away. Then he just said, ‘No, we simply came here to deliver him a message, if he doesn’t stop planting these trees there, then we’ll come back’,” da Costa recounts.

CNN’s Philip Wang in Atlanta and Camilo Rocha in Sao Paulo contributed to this report.