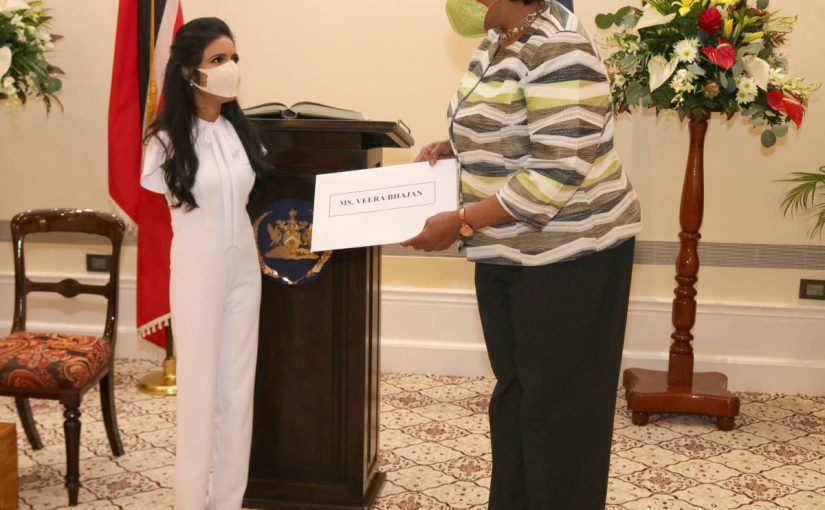 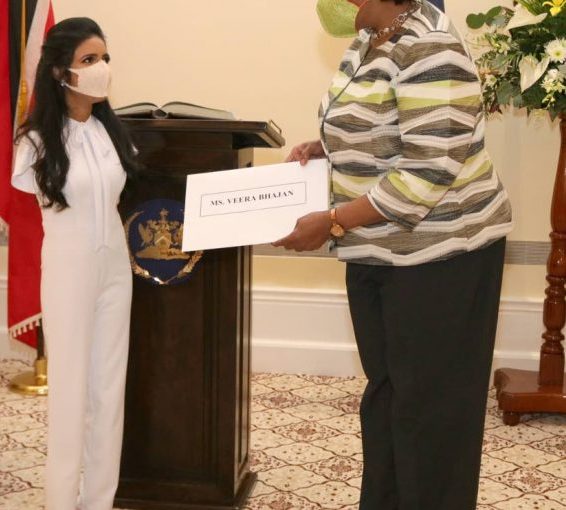 APPOINTED: Attorney Veera Bhajan with President Paula-Mae Weekes when she was appointed a lay assessor with the Equal Opportunity Tribunal for a period of three years. FILE PHOTO –

“SHAMEFUL” and “disgraceful” were just some of the words used to describe the failure by the chairman of the Equal Opportunity Tribunal (EOT) to give effect to the presidential appointment of lay assessor Veera Bhajan.

The tribunal chairman, attorney Donna Prowell-Raphael, was accused on Friday of stymieing Bhajan’s attempts to take up her position since March 17, when Bhajan was first appointed.

The accusations were made at the trial of Bhajan’s lawsuit against the EoT, Prowell-Raphael, and the Attorney General.

Presiding over Bhajan’s judicial review application and claim – as the matter is being heard in a rolled-up hearing – is Justice Avason Quinlan-Williams, who will give her decision on November 23.

He slammed Prowell-Raphael for failing to disclose she was making “active attempts” to have Bhajan’s appointment terminated on baseless grounds.

Fitzpatrick pointed to an April 6 letter Prowell-Raphael sent to President Paula-Mae Weekes, in which she sought to have Bhajan’s appointment revoked on the basis of her disability. He raised the possibility of Prowell-Raphael being biased against Bhajan by virtue of this letter,

Bhajan who was born without arms, is an attorney and a national awardee. Weekes appointed her for three years as one of the tribunal’s lay assessors.

“Here you have the chairman of the EOT, a body set up by Parliament to protect against discrimination of the disabled, seeking to have the appointment terminated on the basis of Bhajan’s disability.”

Bhajan claims she has been unable to take up the job since she took her oath, has not been given any information, is being treated with “scant regard,” and has not been paid for six months.

Bhajan said after receiving her instruments, she tried to contact the tribunal several times by phone and e-mail on when she could take up her post.She said she was eventually told the tribunal did not have the “logistics and/or financial wherewithal” to accommodate another lay assessor.

Fitzpatrick said the tribunal’s explanations were “shallow, disingenuous and shameful,” especially since the tribunal continues to operate virtually.

“The building might be closed, but the business of the tribunal does not stop…and ought not to stop.”

He said on its own evidence, there were 19 active matters before the tribunal.

Fitzpatrick pointed out that even the Attorney General agreed there were serious constitutional breaches.

The AG’s attorney Rishi Dass said it was important for the decision of the President to be respected.

“It is unacceptable for any public officer to disregard (it), and for this lengthy period. You don’t get to flout the decision, you come to the court and challenge it.”

He said there was an obligation for the EoT to be properly constituted with two lay assessors, and to uphold and respect the rights of the appointee and the presidential appointment.

“The Office of the President bent over backward to ensure that the appointment was effected. The office of the AG attempted, at the last minute, to ensure it doesn’t reach the court, because of the damage to the tribunal.

“Now that it is reached here, we have statements that were made that you will have to deal with that are distasteful,” Dass told Quinlan-Williams.

He added, “The Office of the President was incredulous at the explanation on the bias point.”

Dass accepted that Bhajan would be entitled to the declarations as well as an order for damages for salary and an assessment on the protection of the law she was entitled to.

“It is unfortunate that the Attorney General will have to be responsible for making that payment, but she should get the full measure of damages.”

On vindicatory damages to express the court’s condemnation, he said he did not believe them necessary but would be guided by the court’s decision.

In his submissions, attorney for Prowell-Raphael and the tribunal, Ramesh Lawrence Maharaj, SC, said he accepted the AG’s position on the role of public institutions, but maintained that a public officer is entitled to express concerns about an appointment.

He said on the first instrument of appointment, Prowell-Raphael made representations and the instrument was corrected after it was pointed out that Bhajan did not have ten years’ experience as an attorney.

Maharaj also said the tribunal and its chairman’s evidence of infrastructural and financial constraints were not challenged and the court must accept it as fact.

Questioned by Quinlan-Williams whether it was possible for Bhajan to take up the appointment, especially as the national budget had been read recently, Maharaj said the EoT’s budget had been reduced. He also said there were no improvements to the logistical problems.

He was also questioned on the claim that the tribunal only needed one lay assessor at present.

Quinlan-Williams asked: “So one may be overworked… Did that raise concerns at all in your mind?”

Maharaj said it would be difficult for the court to review the decisions of an authority taking actions to solve logistical problems with scarce financial resources.

Maharaj said he assumed they were, as they were appointed “for a long time.”

He said the court could not close its eyes to the evidence of the tribunal and its chairman on the problems it faced. Maharaj pointed to Prowell-Raphael’s affidavit, where she also raised concerns about proposed appointees, but did not get an opportunity before Bhajan’s appointment was made.

Maharaj listed some of the problems identified in Prowell-Raphael’s affidavit.

She said the tribunal has not been able to hear any matters and the building cannot facilitate virtual hearings because it has no internet and does not allow for physical distancing because of limited space.

Prowell-Raphael, Maharaj said, maintained that Bhajan was told she could not assume work until the tribunal was reopened and functioning.

The tribunal has complained of scarce financial resources and its chairman has gone begging to the Chief Justice and two government ministers for additional funding and space to hold virtual hearings.

The tribunal’s office at Manic Street in Chaguanas, also has no electrical certification, as its meter was removed after an electrical burnout.

The affidavit also said the now non-functional elevator has, in the past, stuck between floors and there were plans to relocate the tribunal to the Waterfront Centre in Port of Spain.