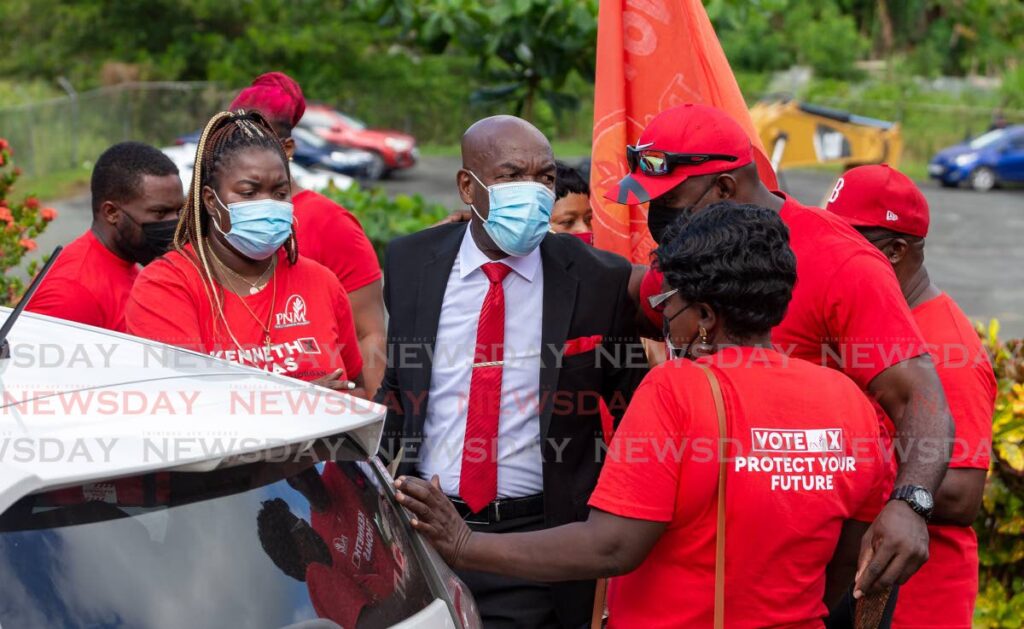 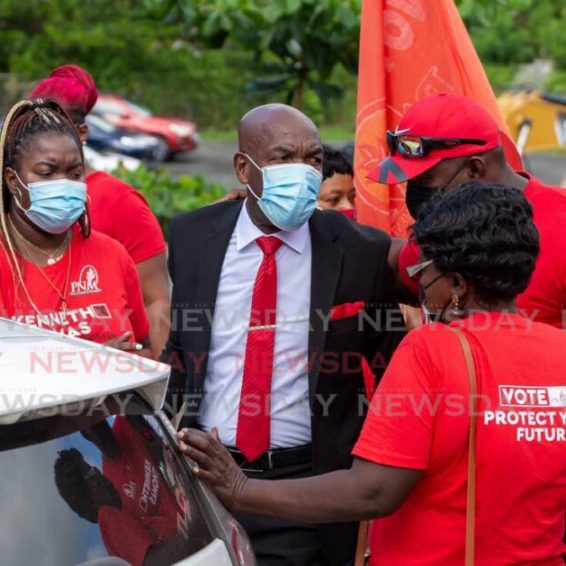 ONE day after the Opposition questioned whether the decision to lift the state of emergency (SoE) was linked to the December 6 THA election, overenthusiastic supporters of the Progressive Democratic Patriots (PDP) and the People’s National Movement (PNM) breached the covid19 health regulations on Nomination Day.

Under the existing public health regulations, no more than ten people are permitted in public gatherings – a measure the Prime Minister reinforced on Saturday when he announced the decision to end the SoE on Wednesday.

Dr Rowley made it clear the restriction on public gatherings was still in effect given the spike in new covid19 cases, number of deaths linked to the virus and the still large number of unvaccinated people.

But on Monday, there was a Carnival-like atmosphere at the four designated electoral offices as prospective candidates filed their nomination papers. Accompanying them were music trucks, dancers, drummers – and even a moko jumbie.

PNM candidate for Bacolet/Bagatelle Joel Jack, accompanied by an entourage, waves to supporters as he arrives at Tam Building, Glen Road, Scarborough to file his nomination papers on Monday. – Photo by David Reid

At the Pembroke Community Centre, which was designated for candidates contesting the Roxborough/Argyle, Belle Garden/Glamorgan and Parlatuvier/L’Anse Fourmi/Speyside electoral districts, most of the supporters wore masks but there was hardly any physical distancing.

PNM Roxborough/Argyle candidate Nadine Stewart-Phillips was the first to arrive, shortly after 9 am. She was accompanied by a small group of supporters who cheered as she filed her nomination papers.

Less than an hour later, the sound of a large music truck heralded the arrival of the PDP’s political leader Watson Duke and deputy leaders Farley Augustine and Dr Faith BYisrael. They were accompanied by scores of flag-waving supporters, many of whom danced, laughed, sang and gave PNM’s Belle Garden/Glamorgan candidate Kenneth ‘Puncheon” Thomas a bit of picong. The PNM’s supporters stood on the sidelines.

“Is time for a change from PNM,” a PDP supporter shouted amid the blaring music.

He claimed Tobagonians were not faring well under the PNM and felt the PDP, which came into existence five years ago, should be given a chance.

Speaking to reporters after filing his nomination papers, Duke said his party’s supporters did not breach the health regulations.

“I am not seeing any (breach),” he said dismissively.

“Everybody was wearing their masks – sanitising.”

At the Tam Building, Glen Road, Scarborough and the Calder Hall and Lambeau Multi-Purpose Facilities, supporters of both political parties again paid no mind to the health regulations.

At the Calder Hall Multi-Purpose Facility, despite the presence of police, PNM and PDP supporters could be seen gathered in groups exceeding ten and dancing to music from nearby vehicles.

Tobago ACP: Is it not foolish to do this?

ACP William Nurse, who promised to crack down health regulation breaches during the election campaign, said on Monday, “God does not destroy a city without warning – they have been warned.

Nurse said he intends to put a stop to this behaviour.

“My thing is: people must be properly distanced for our own safety. At the end of the elections, we all have to live here, whether you are sick or well.

“According to the news, there is only one bed remaining in the ICU – is it not foolish to do this? I don’t know how much kinder I can be with this.”

When Health Secretary Tracy Davidson-Celestine arrived in Calder Hall, there were approximately 25 supporters accompanying her.

THA Chief Secretary Ancil Dennis said he was concerned by the crowds but hoped the supporters were among the vaccinated population.

“I must admit that I am a bit concerned, however, we have some 20,000 persons on the island vaccinated. I am happy about that. I would hope that those numbers would continue to go up so even in the midst of this election period…I am hoping that should prevent any kind of outbreak at this time.”

He added: “I am hoping that the majority of persons, even those coming out here today, are in fact vaccinated and somewhat protected from covid19.”

He urged supporters of all the parties to adhere to the health regulations.

“Campaign vigorously, support your party vigorously and respectfully but please be safe even during this period of pandemic. We are still in a pandemic and therefore I am asking people to, as far as possible, exercise all of the protocols. Mask wearing is important, sanitisation is important, and I can only encourage people to do exactly that even as we campaign during this crucial election.”

‘You can’t vote in the ICU’

Asked by the media about the crowds, Augustine said he was not surprised by the reaction of Tobagonians.

“People are desperate for an opportunity to be outside – let’s be honest. If they were locked up for a while – can’t go out, can’t participate in social activities – it goes without saying that people would be desperate to be outside.”

PNM candidate for Belle Garden/Glamorgan, Kenneth Thomas, prays with supporters before filing his nomination papers at the Pembroke Multipurpose Facility on Monday. – Photo by David Reid

He added: “I would advise the electorate to please do so safely. You can’t vote if you’re in an ICU on December 6, so you need to protect yourself and ensure that you’re in a position to be able to vote.”

Augustine said Tobagonians are excited about the election and the opportunity to attend political meetings.

“Elections are kind of like Christmas. If you can’t smell the paint, it’s not Christmas. Similarly, there are some things if you don’t see it and smell it, you don’t feel the election is in the air.”

Augustine said the PDP will soon announce their campaign schedule.

“Democracy has to keep rolling, even during a pandemic.”

“We are still in the midst of covid19. The government is still not sure how they’re managing this covid19 experience properly and it is very almost hypocritical that at this time we are suddenly raising/ lifting the SoE on Wednesday just because of the campaigns.”

She added: “I saw today, the large numbers out there – there were definitely more than ten, and people were shoulder to shoulder, and I’m asking myself that in the face of the numbers continuing to rise again – what has been put in place to ensure that this is a safe election?

“There was no protocol being applied in this space and I know that the current Health Secretary also was here, so if anybody should have taken responsibility for ensuring the protocol was adhered to it should have been her.”