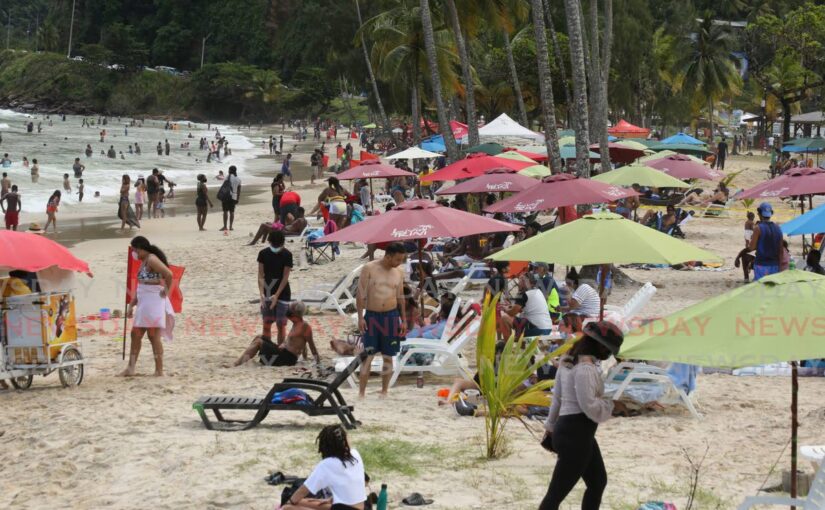 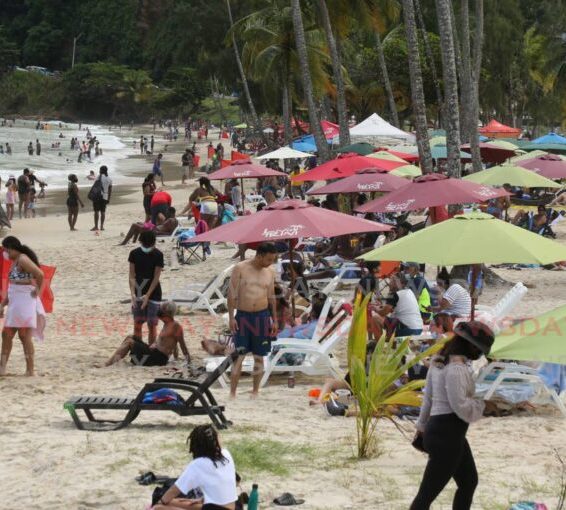 Hundreds of beachgoers turned up at Maracas Beach on Boxing Day to enjoy the water, sun, and the sand. The scent of burning rubber from the brakes of many cars mingled with the scent of frying foods on the approach to the beach.

Beaches were reopened on Monday last week after being closed for months as part of the public health regulations to deal with the spread of covid19. The opening hours are from 5 am to noon.

Many people went as parts of family groups – from babies to elderly, by themselves, with friends, or significant others. Some kicked footballs, played cricket, walked their dogs, ate ice-cream, or let their children bury them in sand. Others lay on blankets and beach chairs and soaked up the sun, and many took to the water to sit, swim, stand or play in the waves.

Sara Persad, whose family came from Freeport, said they were there to take a break from the Christmas rush.

“It’s a break from the Christmas lime, the Christmas rush, shopping, all the liming and drinking we did yesterday. We just came to sober up before we have to go back to work.”

A beachgoer from Cunupia said she wasn’t really comfortable going into the water, but she was enjoying the sun and the breeze while her daughters enjoyed the water. She said her son was still looking for a place to park, as all available parking spots seemed to be filled.

Friends Sasha and Akila, Trinidadians who were on vacation from the US, were there with their families to get a sea bath.

“We were really excited when the beaches reopened because we’re visiting from away so we were hoping it would open by the time we reached, and we were lucky that it did so we could get some sun and all that. We wish it could be open till 2 which is still early enough that you wouldn’t get people liming or congregating. But we’ll make do with what we’ve got.”

Both women said the covid19 cases in the cities where they live, New York and Washington DC respectively, were rising and, in the case of New York, lockdown measures were being implemented again, so they were grateful to be in Trinidad where it was warm, even though cases in TT are also high.

Sandcastles are always fun to build as this family demonstrates at Maracas Beach on Sunday. – SUREASH CHOLAI

Someone who gave his name only as Tony said he thought the beachgoing time should be from 6 am to 6 pm to give people time to come and go and also to allow vendors to make money.

“A vendor I know said he is hardly able to sell enough to break even and I’m sure that’s extending to people who are selling food and drinks, because the time is so short and during Christmas people also have their things to bring to the beach.

“The people who come to the beach will stay in their groups and observe social distancing. Coming to the beach will help to relieve some of the stress in the society. The sun is good for this condition… If you bathe in the seawater, mucus comes down so it’s good for you.”

Maria Fernandez, who is originally from Madrid, Spain, but moved to TT in 2019 with her husband, said she was happy and spoke about the mental health benefits of going to the beach.

She said the best way to keep covid19 from spreading was to close down parties and limes, but the beaches could remain open for people to relax and rest.

Some people had to circle multiple times to find a parking spot, leading to an unpleasant experience for one family group visiting from Colombia. A woman said she had a run-in with the police while attempting to let her disabled mother out of the car.

“There is no sign saying where there is parking for disabled people or where disabled people can be dropped off. So I looked for a pedestrian gate, pulled over and put on the stationary lights on my car. The police came over and were really rude, so I went over and said ‘good morning,’ got no good morning back.

“I said ‘My mom cannot walk properly so I was looking for a place to drop her. I’m going to park inside but I need to drop her here,’ and they were super rude. I said, ‘Can you show me or tell me where the place is to drop her,’ though I knew there wasn’t anywhere, and they rolled their eyes and said, ‘Right there, do it, do it, quickly, quickly.’

This man and these two children take a run on the beach at Maracas on Sunday. – SUREASH CHOLAI

“My family loves Trinidad, but after this visit I don’t think they would want to come back here, because even though the beaches are open, the authorities need to understand and adjust situations appropriately. The beach has no access for disabled people or a sign saying where they can be let out.”

She said other than that incident, their experience with TT has been great and they are enjoying the beach.

“The beaches were never closed in Colombia, but the beaches there are too crowded. I think this is much safer. I think they should keep it like this – no music, no alcohol, but they’d need more parking on days like today and tomorrow when everyone wants to come to the beach.”

Paul, one of the lifeguards on duty, said this was the first day the beach had been so crowded since beaches reopened.

“We made one or two rescues for the morning because even though the sea looks normal it has plenty rip currents, so the water is a little strong.

This lifeguard gives a warning to some beachgoers in the water at Maracas Beach on Sunday. – SUREASH CHOLAI

“People give trouble for their life, they don’t listen. One minute they’ll ask about the red flag and what it means, but is them self does be bathing in front of the red flag. We always have to keep moving them because you don’t want to have to go and rescue them, so you have to keep moving, keep active to make sure people are safe.”