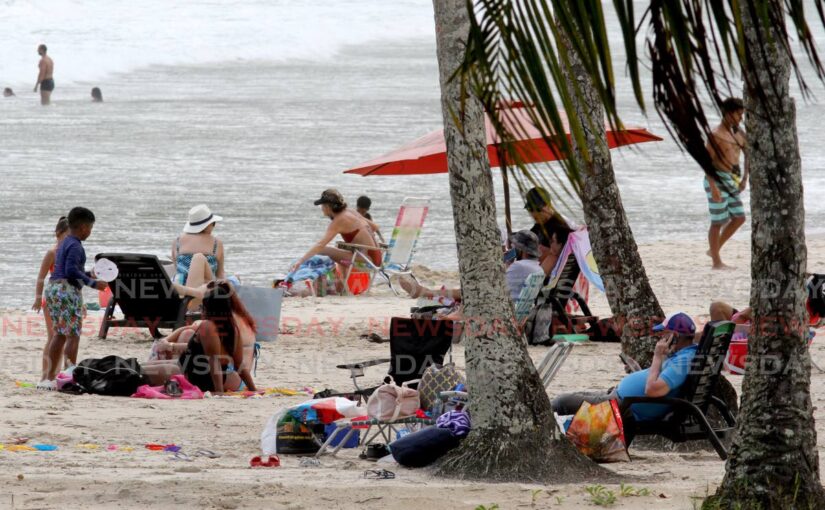 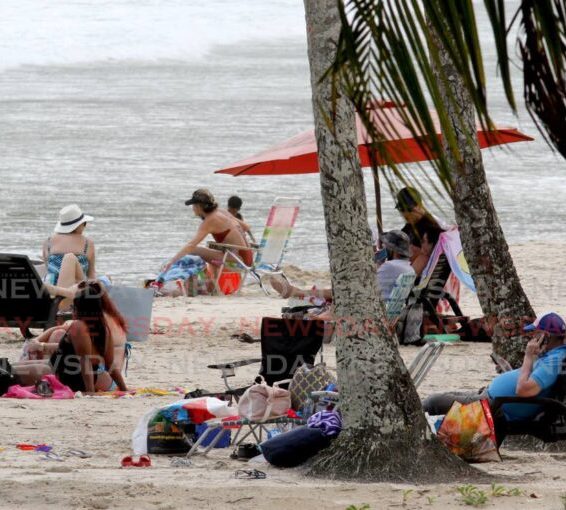 News
RELIEF: These people took the opportunity to be at Maracas Bay on the very first day beaches were reopened on Monday. – Angelo Marcelle

BEACHGOERS, eager to take advantage of the newly-lifted restrictions on going to the beaches, said they enjoyed the “therapeutic” time at Maracas Bay on Monday.

On Saturday, the Prime Minister announced changes to the public health regulations, put in place to combat the spread of covid19, saying beaches would be reopened to the public between the hours of 5 am to midday. Dr Rowley added drinking alcohol and playing loud music on the beaches are prohibited.

People on vacation, families, and those in desperate need of recreation found themselves at Maracas beach enjoying the sun and surf from as early as 6 am.

“I waited so long for this,” said Ardelle Peters, who was at the beach with her daughter, Kaitlan.

“I lived on the beach before the lockdowns, so I was really excited when Dr Rowley gave us these few hours.”

Maxine Harrilal, a St Augustine resident on vacation, said “It is so refreshing and reviving.”

Ramesh Ramnath from Diego Martin also said the time at the beach was therapeutic. He expressed joy over being able to enjoy one of TT’s favourite pastimes.

“You know in TT there are two things that we like to do – play Carnival and go to the beach. There was no Carnival, so I am glad we got to go to the beach. We don’t even need to drink, we can do that when we go home.”

Even the children enjoyed the outing. Four-year-old Zinadine Garcia, seen on the beach playing in the sand with a toy truck with his two-year-old sister Ella, could only describe the moment as “great.

Other children were seen enjoying the beach with their families. Ava and Aliya Ventour, who went to the beach with relatives, said a beach run was something they had craved since the August vacation period.

“We are so relieved to get out and feel the sea breeze. We have been dreaming about going to the beach,” Aliya said. “We kept bothering our parents and saying it is so hot, we could really do with going to the beach.”

Ava added, “It was really relaxing just coming to the beach, because we couldn’t go out to school or other places, and to be able to just come to the beach with the family it is just relieving.”

Jessica and Bridget Garcia, two Port of Spain residents who arrived at around 9 am, said the time limit was acceptable for the moment.

“I guess it’s good. It kind of stops the drinking and partying, but it would have been better to go on until like around 2 pm,” Jessica Garcia said. “But it was a good feeling to just get back outside and feel a little normal. It is about time it opened.”

Vendors and restaurant owners were also happy. Ice cream vendor Marshal Benoit said he was glad for the turnout.

“It has been a while since I have been out. It is since the first lockdown that I have not been able to come out and do my business. I had little money and I have a lot of bills.”

“People kept on coming through. It was a wonderful turnout. There were some police restrictions in the form of people not being allowed to park on the side of the road and being asked to park in the car park. For the first day, it was excellent. People made sure to follow protocol and were very cordial.”

However, he noted there may not be a high turnout of people for the rest of the week, as they are still making preparations for Christmas.

“The Christmas period is usually slow, but from Christmas Day going to New Year’s Day, there will be a good crowd.”