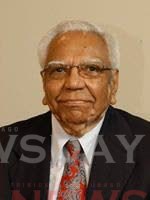 Colleagues of former independent senator and energy expert Basharat Ali have described his passing as a great loss to the energy sector.

Ali died on December 23 and was laid to rest on Boxing Day.

He was praised for his professionalism and diligence.

He spent most of his life working in the energy sector as a chemical engineer before becoming a senator.

Ali made his maiden contribution on June 10, 2003, during the debate on the Kidnapping Bill, 2003. He contributed to 19 legislative debates and eight motions including the Administration of Justice (Deoxyribonucleic Acid) Bill, 2011; the Anti-Gang Bill, 2010; the Anti-Terrorism (Amendment) Bill, 2011; the Children Bill, 2012, and the Trafficking in Persons Bill, 2011, to name a few.

Ali also served on the Committee of Privileges and the Public Accounts (Enterprises) Committee.

In a video tribute entitled Parliamentary Personalities produced by the Parliament in 2015, Ali said he was satisfied with the contributions he made to the country.

He said, “I feel I have worked and done service to my country and I love my country. I like to see it prospering…I made an important contribution because people would stop me on the road and say, ‘Senator Ali, I like what you say.’”

Contacted by Newsday for comment on Monday, Prof Ramesh Deosaran, also a former independent senator, praised Ali for his professionalism.

“His contributions were very well-respected by the government because he spoke on policy and not at all being politically partisan. I did admire him very much for his efficiency: he was always prepared. And when he spoke, all members of the Senate listened because he dealt with the issues professionally.

“I am very sorry to hear about his passing but I knew he was ailing for some time and perhaps destiny caught up with him.”

Deosaran said everyone who interacted with Ali in Parliament would describe him as a genuine gentleman.

“He never scrambled for space. He was not unduly competitive. He was very comfortable with the space he had, and when called upon to speak on energy matters he was always willing and prepared.”

Also on Monday, UNC senator Wade Mark told Newsday he was shocked by the news of Ali’s passing and would remember him as an energy giant.

“He was a scientist and he was a scientific thinker. In Parliament, he brought skills, talent and a great ability to bring thought-provoking and rich contributions.

“He sat near me so we interacted often. He was a very gracious, decent, dignified and honest human being. A giant in his own right and an erudite in his particular field of study and discipline.

“On behalf of the UNC and myself, I want to send condolences to his family.”

“He was very passionate about Trinidad and Tobago and very concerned about the development and government policies. He made a very important contribution and left his mark in the Senate and TT’s history.”