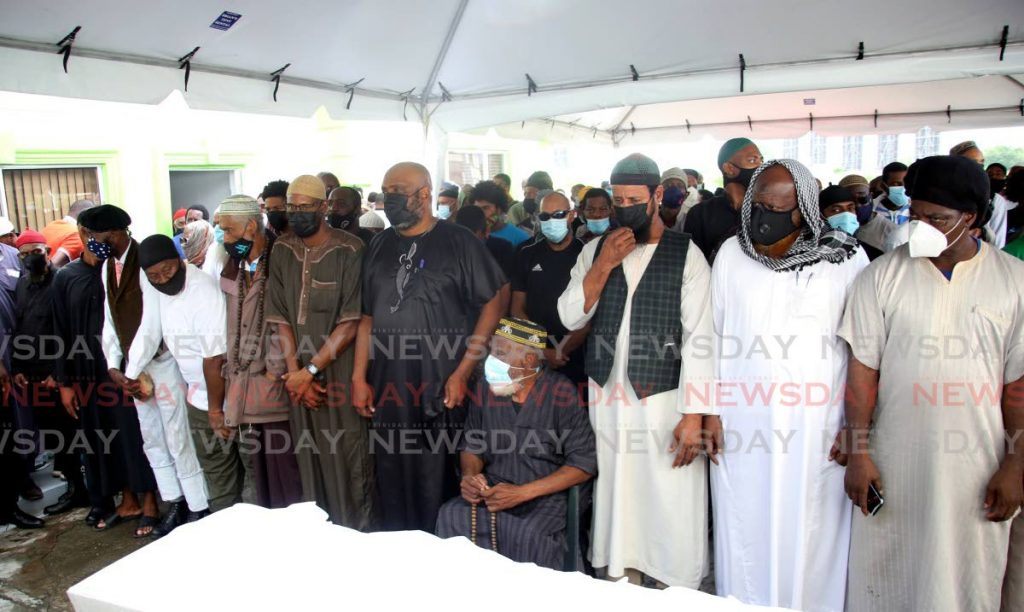 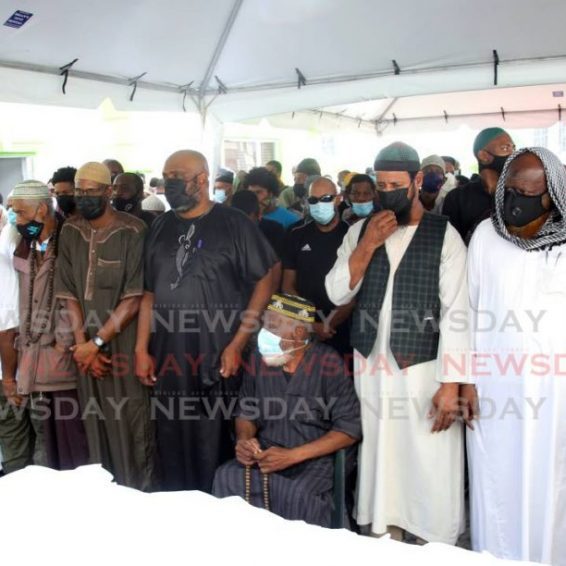 Pallbearers carry the casket of the former leader of the Jamaat Al Muslimeen Yasin Abu Bakr during his funeral at the muslimeen’s mosque on Mucurapo Road, Port of Spain, on Friday. – SUREASH CHOLAI

YASIN Abu Bakr’s former right-hand man and bodyguard Lorris Ballack said his late leader was a gift to the country.

Ballack paid tribute to him on Friday during the Janazaah, the Muslim funeral.

“I want you to know who it is you are burying here today – it is a gift to Trinidad and Tobago. And we loved him just so,” Ballack said, adding that Bakr taught him, in his death, to prepare for death himself.

Abu Bakr, a diabetic, collapsed at his home at Long Circular Road, St James, on Thursday night and was taken to the St James Health Facility, where he was declared dead. He died four days after his 80th birthday.

“What we lost here today is a true son of the soil. This is not a politician, not the Parliament yesterday. This is the leader of the Jamaat-al-Muslimeen. I have been around the Imam for 38 years and today I see and understand what is life. Today he has made it easy for me to die. And if his death doesn’t make it easy for us to be prepared to die, then he did nothing.”

Abu Bakr, formerly Lennox Phillip, the leader of the Jamaat-al-Muslimeen, tried to overthrow the NAR government on July 27, 1990. He and 114 Jamaat followers attacked the Red House during a Parliament sitting, stormed the state-owned TTT, and bombed the police headquarters in Port of Spain.

During the assault, then prime minister ANR Robinson was shot and MP Leo des Vignes died after he too was shot. There were also casualties in the Red House and police headquarters.

In a sworn affidavit last year, Abu Bakr apologised for the pain he caused for the attempted coup.

“For all the pain I caused the nation I am sorry. Now it is time for closure.”

TO ALLAH WE SHALL RETURN: Fuad Abu Bakr, son of the late leader of the Jamaat-al-Muslimeen Yasin Abu Bakr, says a prayer at his father’s funeral at the Muslimeen’s mosque on Mucurapo Road, Port of Spain, on Friday. – SUREASH CHOLAI

The Mucurapo Road mosque was filled with both Muslims and non-Muslims coming to pay their respects . Among them were former gender, youth and child development minister Verna St Rose-Greaves and founder of the Black Agenda Project David Muhammad.

Apart from the police officers on the fringes of the compound, a few, in plain clothes, tried to mix in with the crowd. Some mourners were heard complaining about a lack of physical distancing while others had to be reminded to wear their masks.

Abu Bakr’s sons Ayinde and Fuad both spoke of the legacy their father left, not just for them as his children but to the country. The brothers called for unity among the Muslim brothers.

“We are Muslim and it is our faith that binds us together. I implore you, brothers, beg for unity, unity will continue the hard work that he worked his whole life for.”

Ayinde described his father as his hero, who taught him how to love and showed him righteousness. He said he planned on giving a speech on his father’s birthday, but changed his mind; now he was calling on others to change their lives.

“Change your life. The imam was not born a Muslim as I was blessed to do. He changed his life when he went to Canada and became a Muslim.

Fuad encouraged the gathering to repent before they die as they don’t know when that may be. He called on all who had been touched by Bakr’s life to reflect on his teaching and live them.

“They say the imam has one of the biggest hearts they have ever seen. We know that. The best way we can honour and respect the imam is to live the principles and teachings he has given us. So cry, but don’t cry for long. He passed on a Jumah day, and he is buried on Jumah day.

Ballack said after three days of prayer and fasting, the leadership of the Jamaat will announce their new leader.

Bakr was laid to rest at the Munroe Road Muslim Cemetery.