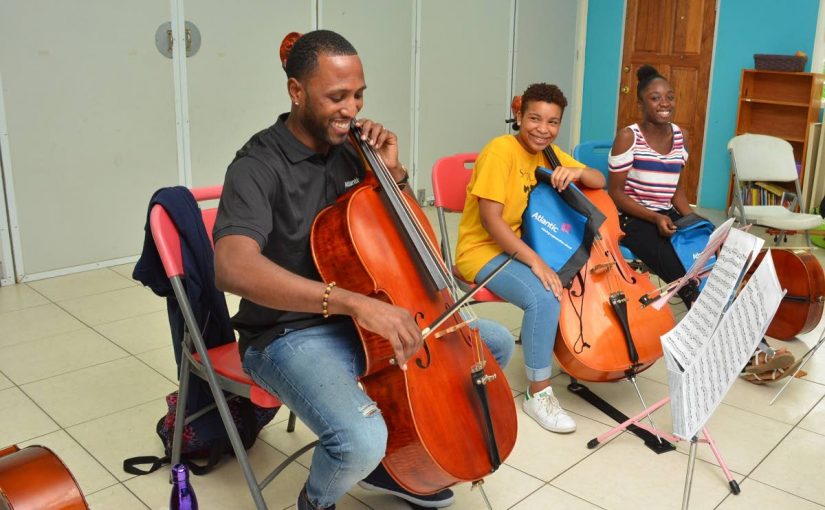 IN a rare meeting of disciplines, the next generation of local music virtuosos showed that their future was secure when they skilfully taught Olympic sprinter and Atlantic sports ambassador Richard Thompson how to play the violin and cello.

The occasion was a special workshop in instrumental technique held recently for 70 members of the TT Youth Philharmonic Orchestra at the University School. The sessions were led by tutors from Venezuela’s Fundación Musical Simon Bolivar (FMSB, formerly FESNOJIV el Systema). Thompson was visiting the workshop and embraced the challenge to play instruments briefly with the young musicians.

“The TT Youth Philharmonic is helping to mould the future of the arts in this country and it’s a different sort of avenue for youth development,” Seunath said. “There is always great value in exposing children to classical music; it helps them intellectually, and even with their social skills and emotional development. Atlantic is pleased to be associated with this activity that hones the skills of young musicians.”

Founder, conductor and music director of the TT Youth Philharmonic Orchestra Kenneth Listhrop explained that the orchestra staged three performances every year and that the instrumental technique workshop preceded the group’s major annual concerts on August 25 and 26 at Queen’s Hall, St Ann’s.

“Programmes like this help the students get practical experience in showing the direct relationship between music theory and how it can be applied,” Listhrop said. “The workshop builds upon their solid foundation playing in the Philharmonic and helps take their technique to another level.”

Thompson said he was impressed by how much he learned after his brief exposure to the classical instruments and his interaction with the students.

“I cannot imagine my life without music,” Thompson said. “These students, musicians, are developing a skill that has the power to evoke emotion and engage audiences. Music is so intertwined with our culture. Workshops like these actually help to make our culture richer, which can only be for the benefit of the children and the entire country.”

Tue Aug 14 , 2018
The Trinidad and Tobago Film Festival (TTFF) seeks to highlight excellence in filmmaking through the exhibition of fiction and documentary features and short films made in TT, the Caribbean and its diaspora, as well as international filmmakers with films from or about the Caribbean or its diaspora. The 13th edition […]