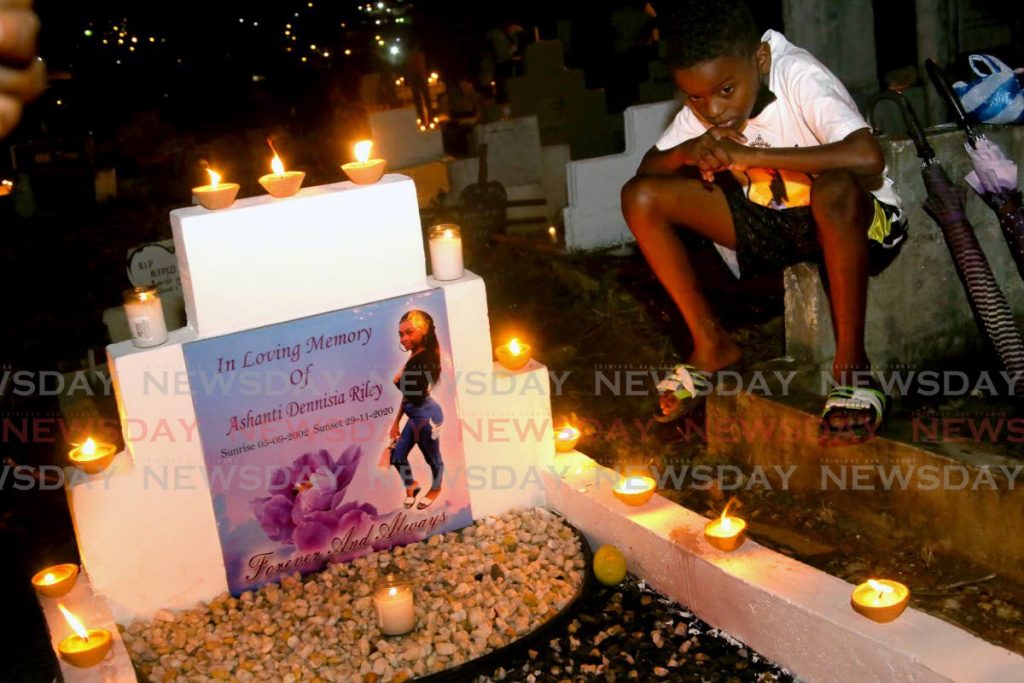 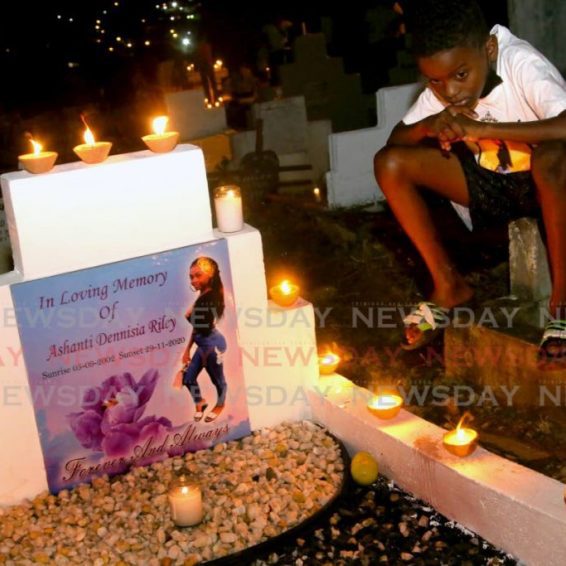 CANDICE RILEY, mother of murdered teenager Ashanti Riley, 18, told Newsday a part of her had been lost with her daughter’s death and still could not believe she was gone. Riley was speaking as she lit deyas and candles with family members at Ashanti’s graveside at the San Juan Public Cemetery on All Souls night Tuesday.

“I feel sad. It hurts that I have to come tonight to light up for my daughter’s grave. Very hard. It’s going to be a year now.”

Ashanti disappeared on November 29 last year after entering a taxi in San Juan to visit her grandmother and, tragically, her body was found on December 4 dumped at La Canoa, Santa Cruz, with forensic tests showing she had been strangled, stabbed and beaten. Ashanti’s death, along with that of Andrea Bharatt, 23, who disappeared on January 29 and was found dead on February 4 in the Heights of Aripo, ignited nationwide vigils and protests calling for protection and respect for women and girls.

Newsday asked Riley how she’d been coping. “It is hard. I am waking up every morning because God gives you life to get up to go through the days, right. But it is hard.

“Every corner you turn in the house, you remember her. It is very hard when I have to make that journey to walk out of the road where my daughter took her last steps, her last journey to go by that corner. Every day I have to walk it (that road) to get a car to go to work. So it is hard. It is hard.”

Had the nation’s embrace of her and Bharatt’s’s father helped ease the pain?

“I thank the nation for their support. It is hard still, even if you have all that support around you. It’s still hard because remember it is a child I lost.

“It is a part of me that is gone. I thank the nation for their support, even Andrea’s dad, for that support but it is still hard. It is like a piece of my heart is gone and it will never get replaced.”

How was she able to carry on in her daily duties, bearing the loss of her daughter?

“Due to my two children…That is what really gives me the strength to go on. I have to get up myself and go out to work for those two. So when I’m feeling down I look at them and they give me the power to go out there and do a day’s work.

“If it wasn’t for them, I’d have been in …I don’t know. Isolated from everybody.”

Does religious faith help her to cope?

“But due to the faith I got from my mother and my grandmother, growing up in church, that helped a lot.”

What did she most remember about Ashanti?

“Right now what I miss is just for her to be calling me, ‘Ma!’ When we were home the vibes were like ‘Ma! Ma! Ma!’ She just used to call you out for no reason. When you say, ‘What, girl?’ she just used to laugh. That is what I am missing right now. Just hearing her voice.

“It is hard to even look at her pictures. When my sisters and them post up little pictures of her, I say ‘Oh my God, is this real?’

Did she have any message to people in TT?

“Faith. That is all. Let God guide you every day in the aspects of your life. We are living in a dangerous world and it is only God we could count on right now. It is only God, nothing else.”