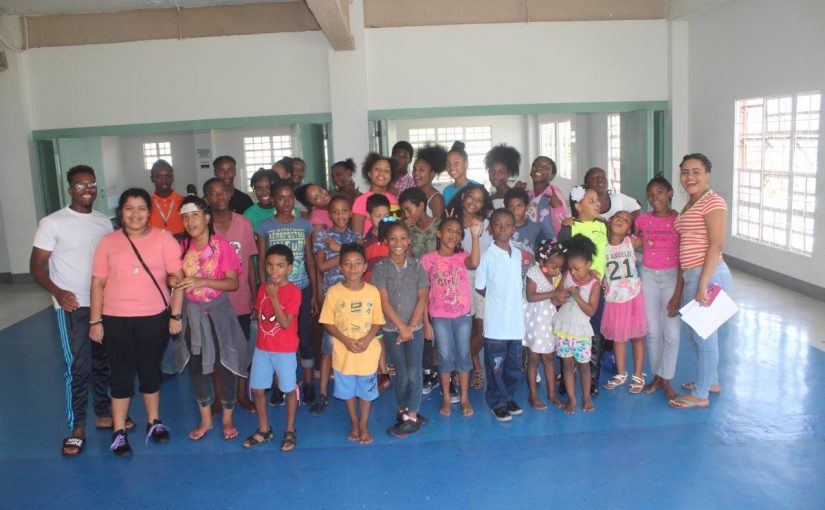 The Performance Town art camp, directed by Christy Maynard, helps children learn essential life skills that are not necessarily taught in the same way in a traditional classroom setting. The camp which started on July 9, runs until August 10 for children between the ages of three and 17.

Principles taught include self-acceptance, expression, confidence and conflict resolution, through acting classes and other exercises. Campers are exposed to elements of musical theatre and dance workshops, which range from folk to Indian classical.

Senior acting tutor Levee Rodriguez said the camp, which has 45 campers this year, has seen a moderately increasing number of attendees over its three years of operation. He said, “It is not the traditional academic camp approach. But when parents come and see the mind, body and spirit approach, they are impressed, and see the changes in their children.”

He said many of the exercises include lessons on self-acceptance and acceptance of others, empathy, anti-bullying and stories behind bullying, ethics, drama, music and overall personal development. He said the exercises on bullying also help children who are bullied to realise that bullies are usually bullied, sometimes in their homes.

He said the camp has also helped children who struggle with issues related to their level of confidence. “I have a student. When she joined she was deathly introverted,” Rodriguez said. He said she has a speech impediment, which sounds like a vocal stutter. However, from being in the camp, she was given a role in a play. Because of her involvement in preparing for the play, which included tongue twisters and memorising lines her speech impediment is almost unnoticeable and her level of confidence has increased tremendously. “She is one of the most improved now in terms of acting and overall improvement.”

Another major part of the camp programme includes pan. The pan workshops introduce campers to a basic level of reading sheet music, the history of steelpan, starting from the inner city gangs of Port of Spain, and practical exercises in playing the national instrument. This is taught by Brian Benoit, who also teachers campers how the pan is made. Campers learn how to make and play the pan.

Rodriguez said for the end of camp this year, there will be a play which will include playing of pan and the history of pan. The main theme of the play will focus on how women should be treated, and the value of women in society.

He said the plan for next year is for the camp to evolve into a cultural camp. “Each year we try to add something new, pan was the new addition this year.”

Sun Aug 5 , 2018
I’ve now experienced my first Emancipation Day in Trinidad. In my usual research, I discovered Emancipation Day was first recognised in TT on August 1, 1985 – making it the first country in the world to declare a national holiday to commemorate the abolition of slavery on a set date. […]