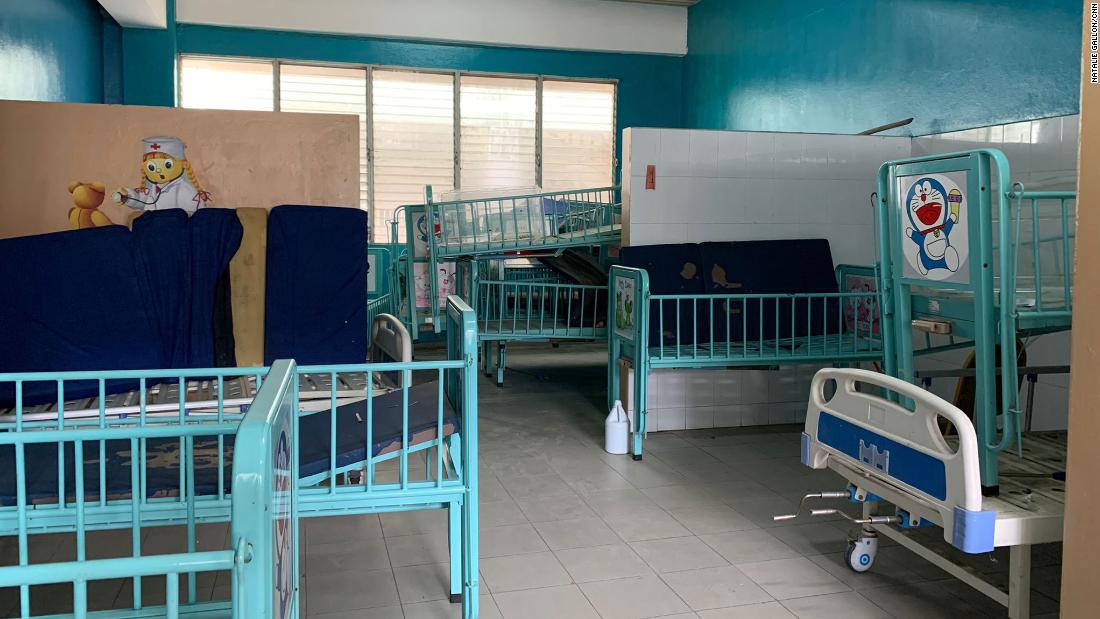 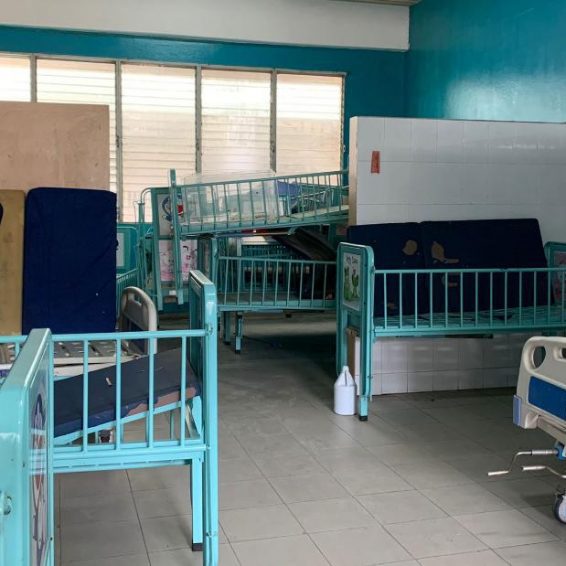 Amid a cascade of crises, Haiti’s fuel shortage could be the worst

1 month ago·7 min read
ShareTweetPinShare
Home
World News
Amid a cascade of crises, Haiti’s fuel shortage could be the worst
The content originally appeared on: CNN
Footsteps echo through empty hallways. The normal beeps and whirs of hospital equipment are absent. The organized chaos of a city emergency room is replaced by empty chairs strung with caution tape.
The stillness is pierced only by the occasional cry of a child, about two years old, lying on her belly in a crib in the hospital’s pediatric unit. She is one of the only patients currently admitted in what is usually one of Haiti’s largest, busiest hospitals.
The vast majority of those who show up to the front door are being turned away.
“It’s too painful to count [how many we’ve turned away],” said a first-year medical resident named Rachelle, who asked CNN not to use her last name.
Read More
The hospital, said Rachelle, cannot accept patients because it simply cannot provide them care.
Hospital Universitaire de la Paix runs primarily on generators, which in turn run on gasoline. But amid a crippling nationwide fuel shortage, their tanks are empty and the hospital stays dark.
The handful of staff members on site — just two first-year residents and a few nurses — are sleeping there. If they leave, they may not be able to get back, since buying gasoline these days is both difficult and expensive. Plus, there’s the risk of being kidnapped along the way — a growing threat in Port-au-Prince.
Gang leader threatens to kill captive missionaries in Haiti if he doesn’t get what he wants
The lack of fuel and the threat of violence are keeping the rest of the hospital’s staff at home, unwilling or unable to come to work. The hospital has essentially stopped functioning as a result.
Pregnant women about to give birth are sent away to try and seek care somewhere else. Oxygen tanks sit empty because the transport services to take them to get refilled have ground to a halt. Patients, including children, are dying preventable deaths, hospital staff say.
“It’s really sad,” said another first-year resident named David. “It really hurts. With no oxygen, I can’t do anything. I’ve had to watch some babies die.”
The mother of one young patient, Ketia Estille, spoke with CNN as she held the hand of her three-year-old son. She said he had almost died the night before because of an asthma attack.
“The doctor had to use his phone flashlight just to see while he tried to give my son oxygen,” she said. “It’s so bad, we almost lost him.”

Reasons for the crisis

The national fuel shortage shuttering Haiti’s hospitals has lasted for months, driven by reasons ranging from pandemic aftermath to government incompetence to gang violence. But it is also bringing into focus how the Haitian government’s oil policy sets it up to face crisis after crisis.
National law requires Haiti to purchase fuel directly from international vendors through its Office of Monetization of Development Assistance Programs (BMPAD), which buys oil at international market rates.
But the law also requires that gas be sold here for no more than 201 Haitian Gourdes per gallon, or about $2. That’s one of the cheapest prices in the world and far below what it would sell for in an open market — amounting to a major subsidy that the country’s heavily indebted government cannot afford.
In its fiscal year 2020, which ended on September 30, Haiti’s government lost the equivalent of roughly $300 million in fuel transactions, according to the Ministry of Economy and Finance. At the same time, overall government revenue was 35% less than what was expected, according to the central bank.
Oil surpasses $85 for the first time in seven years
Without other strong sources of national revenue to offset its fuel-related losses, the government often does not have enough cash on hand to purchase enough fuel for a country of more than 11 million people.
And even when the government does have cash, it’s not always the right kind. “Sometimes the government has the money but doesn’t have US dollars,” said Haitian economist Etzer Emile. “No one wants to buy Haitian currency on the international market because it is so unstable.”
Capacity is also an issue, according to Emile. Haiti does not have enough storage capacity for fuel that would enable it to buy large quantities when it has the money to do so, preventing the country from taking better advantage of the times when it has more dollars to spend.
These issues can all be papered over more easily when the international price for oil is low. But cheap oil from Venezuela — once a major supplier — has dried up, and prices on international markets have spiked this year, exacerbating the problems generated by Haiti’s unsustainable fuel policies.
Those structural issues have been around for a long time. What is new, and perhaps just as responsible for the current crisis, is the growing power of Haiti’s gangs and their control of delivery supply lines.

Gas only moves if the gangs allow it

There are two main locations where fuel is imported in Haiti, at the ports in the Carrefour and Varreux neighborhoods of Port-au-Prince.
Access to both of these facilities depends entirely on National Highways 1 and 2. Any and all fuel that gets delivered to the rest of the country will at some point traverse those roads — which run through the heart of territory controlled by some of Haiti’s most powerful gangs.
Some have begun taking advantage of that, setting up roadblocks to keep tanker trucks from accessing the fuel delivered to docks. Anyone, including the government, who tries to pass gang roadblocks faces steep consequences.
Powerful gang behind kidnapping of 17 US and Canadian missionaries in Haiti, security source says
“You might get shot, your tanker might explode, they could kill you,” said one fuel retailer who asked not to be identified for security reasons. “If you’re lucky the gang will just kidnap you because then you might survive.”
At times, gangs have allowed some tankers to get through, but only after paying exorbitant bribes. An empty tanker is expected to pay at least $5,000 to pass gang checkpoints while one carrying fuel can be charged up to $20,000, according to the retailer.
The gang’s motivations for blocking highways is not solely monetary. Jimmy Cherizier, leader of a federation of gangs known as G9 that has been blocking fuel delivery tweeted on Monday morning, “We demand the resignation of Ariel Henry as soon as possible…The solution for the crisis is the resignation of Ariel Henry…”
The Prime Minister’s office says it does not “deal with” gangs.

Shortages impact every aspect of society

There are few parts of Haitian society that have not been affected by the shortage. On the black market, a gallon of gasoline goes for as much as $25, in a country where many survive on just a few dollars a day.
Social tensions are spiking. Protests by Haitians frustrated over an utter lack of access to fuel have at times snarled daily life in the capital, with burning tires and debris thrown into the streets in hopes of creating enough chaos that the government is forced to address the problem.
General strikes have been called twice in the last two weeks, with transportation union members not reporting for work and businesses shutting down as a result.
The lack of gasoline has also forced some of Haiti’s limited larger industries, which employ lots of people, to temporarily halt production. Even the factory that produces Prestige, Haiti’s most famous beer, was forced to stop filling its famous bottles temporarily, lacking fuel to run the generators that power its facility.
The result is a cascade of economic problems. When sellers have to spend more on gasoline to bring their products to market, those costs get passed on to the consumer. Haiti’s inflation rate has been in the doubt digits for several years, and will almost assuredly continue to rise. Meanwhile, wage growth pales in comparison. The average Haitian’s spending power, already one of the lowest in the world, will continue to drop.

A matter of life and death

It’s still too early to assess the toll that the current fuel shortage has taken on public health. But when Kedner Pierre wakes up every morning these days, the director of Haiti’s largest cancer treatment center at Innovating Health International (IHI), his first worry isn’t chemotherapy or patient visits or paying the bills — it’s gasoline.
“We are scrounging, buying one or two gallons of gas at a time,” he told CNN. “It’s completely unsustainable. I am extremely frustrated.”
The center is still seeing patients and doing its best to not interrupt the crucial services it provides to Haitians, no matter their ability to pay.
But the effects of the gas shortage are readily apparent all around the center. Sonogram and X-ray machines sit idle, as the generator that powers them can only be run sporadically. Operations are canceled and rescheduled depending on fuel availability to run the operating room.
A bank of refrigerators that line a wall in a darkened room filled with medicines for chemotherapy have been turned off. Pierre puts ice in the refrigerators to keep the medicine from spoiling.
The facility does have a solar power system but the power it generates has to be allocated to the most essential pieces of equipment, including the freezer that holds 2,000 doses of the Moderna Covid-19 vaccine.
Even if the hospital were able to accommodate more patients, many people in need of care cannot find transportation, jeopardizing the life-saving treatment plans designed by IHI staff.
“If the patient can’t come to take the medicine, to take the chemotherapy, the patient can die,” said Pierre. “This is a huge problem for us.”