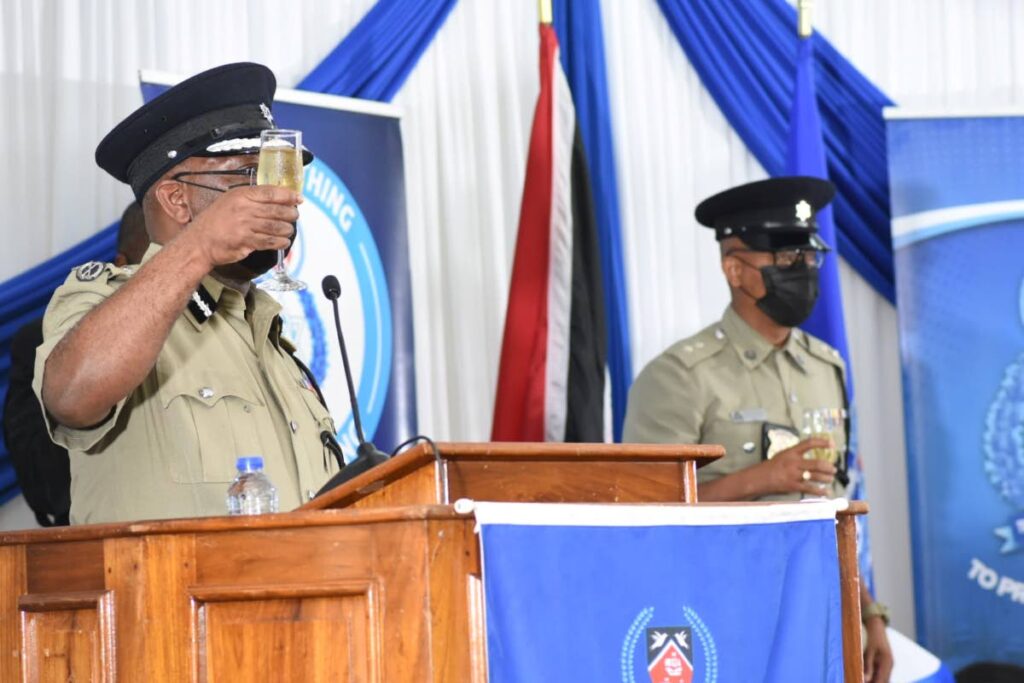 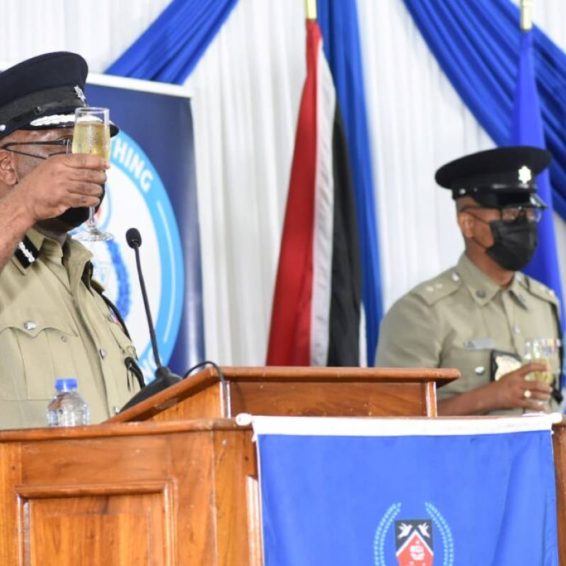 FRESHYLY MINTED: Batch 1 of 2021, SQUAD A-C, entering the gymnasium at the Police Academy in St James for their graduation ceremony on Saturday. PHOTO COURTESY TTPS

FORTY-FIVE police recruits graduated over the weekend and were challenged at the graduation ceremony to “be the change you want to see.”

The graduation came following the officers’ six months of training.

The graduating class of Batch 1 of 2021 was congratulated by the police executive at a ceremony at the Police Academy in St James, a TTPS release stated.

The graduation ceremony was divided into two ceremonies to ensure that covid19 public health regulations were adhered to.

HERE’S TO YOU: Deputy Commissioner of Police Mc Donald Jacob raises his glass to toast the 45 newly graduated police officers during a graduation ceremony on Saturday at the Police Academy in St James. Also in photo is Acting Supt Curtis Simmons. PHOTO COURTESY TTPS

The theme for this year’s graduation, “be the change you want to see,” saw most speakers focusing on the value of service to citizens.

Deputy Commissioner Mc Donald Jacob, who gave the feature address, saluted the graduates and underscored their role in adding to the success of the service. Jacob reminded the officers that their functions centre on service and support.

He said that with the advent of the pandemic, adaptability was key in their training and is pivotal to service.

Jacob commented on the blended training approach used for this batch of graduates, such as online lecture classes. He encouraged the graduates to “set the example, weather the storms and to take the spirit of adaptability and resilience with them as they stand steadfast in their purpose to protect and serve with pride.”

The ceremony ended with a toast to the success and the pliability of the recruits and the training team in treading this new path of blended learning and emerging successfully.

The second group is expected to graduate in December.

Also in attendance were DCPs Erla Christopher and Joanne Archie along with Provost, Dr Simon Alexis and Superintendent of the Police Academy, Curtis Simmons.