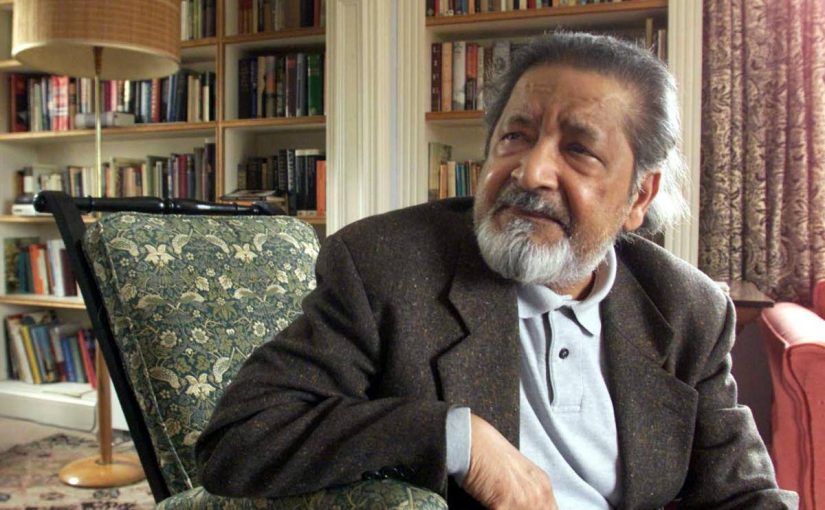 There were not three but four writers present at the second Bocas and Culturego Lit Night on Thursday: three live women, and the spirit of Sir Vidia Naipaul, who died on August 11.

So said Bocas programme director Nicolas Laughlin, introducing a relaunch of an anthology of recent Caribbean writing and a tribute to Sir Vidia.

At the Writers Centre on Alcazar Street, St Clair, three writers who contributed to the anthology, Thicker Than Water, compiled and edited by Funso Aiyejina, shared passages from their work in the book, then read passages from Naipaul and discussed him and his work.

Aiyejina, a professor emeritus of the University of the West Indies, St Augustine, said of the anthology, “From the Bahamas down to Trinidad, people were writing about the same issues.”

He said this indicated the commonality running through the region, illustrating the similarities within the region, and a universal emphasis on family relations.

He said this greatly influenced the name of the collection.

Newsday editor in chief Judy Raymond, Newsday freelance writer Lisa Allen-Agostini and Shivanee Ramlochan each read compelling pieces from the book at this second launch. All the writers’ pieces were related to family and lineage, and told varying stories which effortlessly illustrate the multi-dimensional space that is TT.

Raymond’s On the Edges of History told the story of her grandfather, journalist Arthur F Raymond. Raymond explained, “It begins with Arthur, because he is the first Raymond of whom anyone has memories.” The snippet of AF Raymond’s story was written not only through the lens of his granddaughter’s view, but included details about him shared by family members and friends. More than an exploration of genealogy, the snippet of this short memoir was a reflection of mid-twentieth-century TT, illustrating gender roles, family relations, class and colour.

Raymond said, “I wanted to write about him not only for personal reasons, but also because I think he was fairly typical of a lot of people of that era of the black working class and lower middle class – some of whom managed to pull themselves up and make something of themselves.” Ramlochan read three poems: The Young Indian Witch Learns How to Pray, The Nameless Girl and The Natures of Blood, and My Father and His Father before Him. The first, she said, sways between reality and bits of fiction, discussing masculinity in families and what that masculinity may represent to children, in this case, a niece. The poem vividly melds imagery of discomfort and fear facilitated by a religious system.

Ramlochan began, “When my mother asks what made you, I spin the prayer mat of our family tree to face her, tell her, pick a man: my uncle, the alcoholic; my uncle the welder of nursery pornographies; my uncle, the viscous flirt…”

The second speaks of coming-of-age experiences for a teenage girl as she slowly approaches womanhood, the changes in her body that come with the transition, and the lessons she learns from the possible metaphors held within these new experiences.

The final poem Ramlochan read revisited the childhood of an East Indian girl from rural Trinidad and captured the lessons learned by a girl from watching her hard-working father.

Agostini continued, “Another sip: by now I could smell the raw, bitter, gin, the sour lime. It made my mouth water, but she drank it down and made herself another.” The piece illustrated another side of the Caribbean woman’s experience. Again, traditional gender dynamics within the region were explored – how women viewed men, versus how they viewed themselves, and other women.

After each writer completed reading and elaborating on their pieces from Thicker Than Water, they did readings from selected writing from Naipaul’s work.

Raymond read a section from Finding the Centre, Ramlochan from The Enigma of Arrival, and Agostini explored Naipaul’s creativity in The Suffrage of Elvira. All three writers agreed that all three pieces reflected varying attitudes toward TT held by Naipaul, arising from the way he may have internalised childhood experiences which affected his creative work. The three also agreed on the autobiographical nature even of some of his fiction. All three illustrated how the environment within which his journey began fuelled the body of work which followed.

Thicker than Water is published by the Peekash imprint, now managed by the Bocas LitFest, which aims to be a non-profit organisation that offers exposure for the work of regional writers.

The post 3 writers and Sir Vidia appeared first on Trinidad and Tobago Newsday.

Elisha Baptiste: Attending to the business of show business

Sun Aug 26 , 2018
Elisha Baptiste is bringing a slice of Hollywood to Trinidad and Tobago next month. This patriotic, talented and accomplished young television and film producer has taken on the new role of event manager as her newly-formed company, Elisha Creates produces a ground breaking workshop event for local actors, scheduled for […]